“The Big Short” — How Do You Make a Movie About Subprime Mortgages Sexy? Cast Pitt, Bale, Carell and Gosling 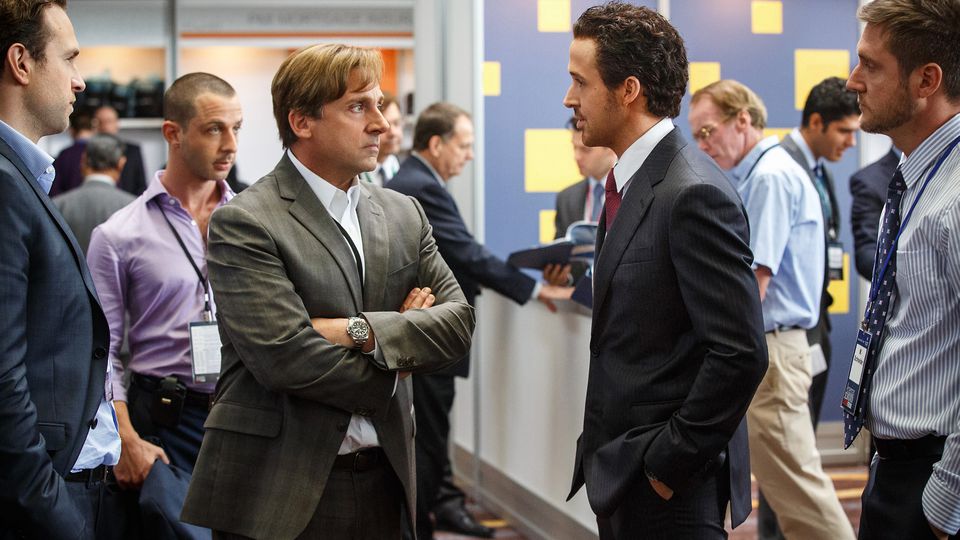 I know that there was a movie about subprime mortgages screaming to be made, but I didn’t expect “The Big Short.”

When in 2013, it was announced that Paramount Pictures would adapt Michael Lewis’ surprise bestseller “The Big Short: Inside the Doomsday Machine” into a motion picture, eyebrows were raised all over Hollywood.  After all, this was a book about the 2008 financial meltdown that was highly praised by economists and considered inscrutable by many casual readers.  Nonetheless, it made pop culture headlines when it replaced a Chelsea Handler memoir as #1 on the New York Times bestseller list and remained on that chart for 28 weeks.

If it was possible, Hollywood’s eyebrows were raised even higher with the revelation that the writer/director of the film about the financial meltdown would be Adam McKay.  If you’re not familiar with Mr. McKay’s oeuvre, among its highlights are “Anchorman,” “The Other Guys” and “Talladega Nights: The Ballad of Ricky Bobby.”   I have no issue whatsoever with “Anchorman,” but seriously, McKay was such an off-the-wall choice that, as wrong as it seemed on paper, I held hopes that he could be the best choice ever.

Turns out, he isn’t.

Not that “The Big Short” is a terrible film — it isn’t, and it even has a good shot at getting a Best Picture nomination.  But it’s that the nature of the material and the way that McKay has chosen to tell it has inherent drawbacks that makes one wonder why we are celebrating the men for whom this film wants us to cheer.

“The Big Short” focuses on four separate stories of men (and women are conspicuously absent here) who foresaw the economic bubble bursting and acted on it, despite the advice of financial wizards around them.  First among them is Michael Burry (Christian Bale), a San Jose MD and money manager who is immediately pegged as a rebel because he goes to work barefoot, gets his hair coiffed at Supercuts and bangs the drums in his spare time.

Burry’s discovery that the economic boom has been based on dangerously precarious mortgage loans that are about to go bust is picked up by several others:  Jared Vennett (Ryan Gosling), a Wall Street banker who serves as the film’s narrator and is the first to break the fourth wall and address the audience directly;  Mark Baum (Steve Carell at his most wonderfully obnoxious) who has the habit of arriving at meetings late and hijacking them; and retired trader Ben Rickert (Brad Pitt in his sleepy mentor mode), advising two newbies (Finn Whitrock and John Magaro) on how to make money placing “the big short” against Wall Street.

Part of what made Lewis’ book so difficult for general audiences was likely the use of obscure Wall Street terminology.  McKay wisely understood that his audience would probably have the same trouble, so narrator Gosling introduces movie star Margot Robbie (of Scorsese’s “The Wolf of Wall Street,” a movie that “The Big Short” is desperately trying to emulate).  Robbie goes on to explain the meaning of “subprime mortgages” while naked in a bubble bath sipping champagne in an effort to capture our attention.  It does.  (Subsequent explanations by Anthony Bourdain with a pound of day-old fish and Selena Gomez at a blackjack table are, shall we say, less effective.)

What was a film designed to celebrate out-of-the-box Wall Street thinkers wound up having the opposite effect for me.  It all seemed just a little easy.  The Wall Street establishment is embodied by smug high-fiving frat-boy types (Billy Magnussen and Max Greenfield) whom it’s easy to loathe.  But when the market turns downward, and our contrarian heroes, who have now made millions off of other people’s financial collapse, indulge in the same kind of fist-pumping, just who are the heroes here?

“The Big Short” is serviceably done.  The look and editing are effective, though the all-star cast varies in impact.  Bale, who has been nominated for several awards for this performance, is a bit hammy at times.  Gosling is forgettable, and Pitt walks through his performance.  Only Carell really shines, though a comic performance like this rarely gets much attention.  Let’s hope this changes that equation.

Still, the film gives only lip service that to the idea that the economic meltdown was not just a game among big-stakes players but instead had devastating effects on average Americans and others worldwide.  It seems a missed opportunity that McKay couldn’t have made his film more relatable on the economic effect it had on the very people he’s asking to patronize his film.

For Lawrence, DeNiro and Cooper, the Third Time Together Is Not the Charm in David O. Russell’s “Joy”