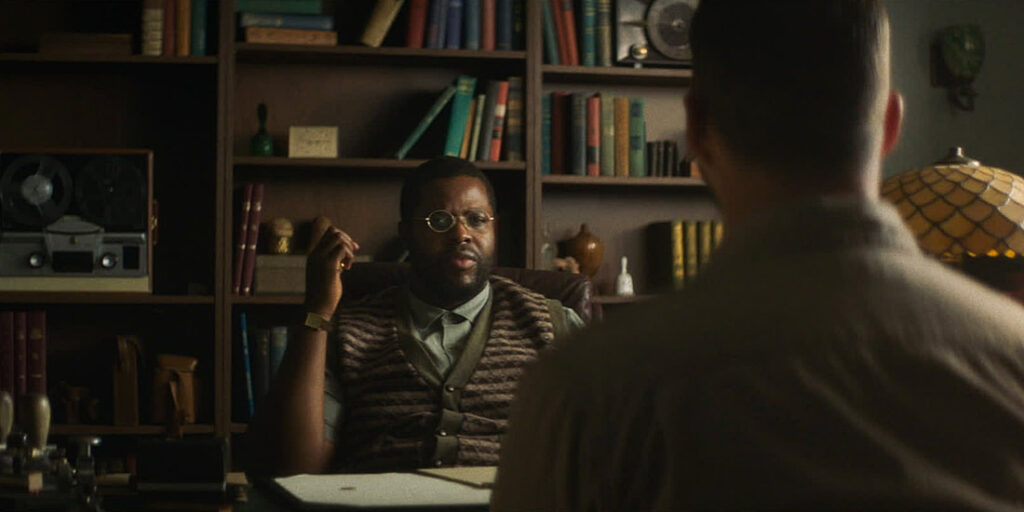 There are some films that, after the final credits roll, you are anxious to talk about it over coffee with your friends. However, when you see “Nine Days,” you may want nothing more than to go home alone and think about your life.

The enormous power of the film, the feature debut of writer/director Edson Oda, doesn’t stem from some outlandish plot twist or a heart-pounding car chase. “Nine Days” delivers its emotional punch differently — in much the way that some horror movies can get under your skin, “Nine Days” can get into your head. The film offers a different kind of storytelling, as it is initially presented as a film about other people. Still, as it progresses, it becomes unsettlingly clear that it is really about you: the viewer.

At first glance, “Nine Days” seems simple enough. The film takes place in a cluttered Craftsman house situated in the middle of a barren salt flat. Inside the house is Will (Winston Duke), an arbiter whose job it is to interview souls, determining which ones would likely be a proper fit to be placed into the bodies of the living. As he conducts queries of each new candidate, Will, in his spare time, keeps track of those souls that he has already placed on Earth via a wall of vintage TV sets playing tapes from an ancient VCR. Immediately, the viewer can sense the timelessness of “Nine Days.”

Will particularly tracks the progress of his favorite soul, violin prodigy Amanda (Lisa Starrett), who would appear to be living her fullest life. Still, one day he looks on in horror as she fatally plows her car into a concrete overpass. Though still grieving her loss, he must then begin the arduous task of interviewing potential new souls as a replacement, a process that can last upwards of nine days. Those candidates who fail to prove to Will that they have the necessary traits for a meaningful life on Earth are quickly rejected, but before they disappear, Will and his assistant Kyo (Benedict Wong), a previously rejected soul who has not disappeared, produce a makeshift memory for the rejected to keep.

Will’s primary focus soon turns to evaluate his final five aspirants, each of whom reflects a very specific aspect of a human personality — Maria (Arianna Ortiz), a hopeless romantic; Kane (Bill Skarsgård), who takes a practical and sometimes cynical view of the life to come; Alexander (Tony Hale), a funny guy with a dark side; Mike (David Rysdahl), who sees the world through pessimistic eyes; and Emma (Zazie Beetz), a curious and questioning soul who is not afraid of probing Will’s past.

Taken together, these traits would constitute an ideal character for any bodily host to live a fulfilling life, but Will has no such luxury as he is forced to select one of these character traits for the soul’s journey to Earth. As we watch Will weigh his options during his extensive interviews, Oda prompts us to think about which of these traits is the one that most closely represents our own character. For me, I have felt at times elements of all five of them, a few of which I’m more proud of than others

As Will, Duke is able to wordlessly communicate to us that the arbiter is having a challenging time choosing a soul, mainly since one of them has triggered Will’s own existential journey, as he finds himself looking back on the life he led while on Earth and the one moment where he felt the most alive. The result is a stunning moment in the film’s climax where Duke displays all of Will’s own long-dormant character traits and brings them roaringly back to life.

“Nine Days” is not a film that you can just sit back and let wash all over you — its chosen method of storytelling requires no small bit of work on an audience’s part. But that effort is so worth it because the issues with which it deals are so fundamental to who we are as human beings. At its very core, “Nine Days” serves as a much-needed reminder that our time on Earth is fleeting. And that short time is so terribly, terribly precious.

GRADE: A-
This review first appeared at Next Best Picture.