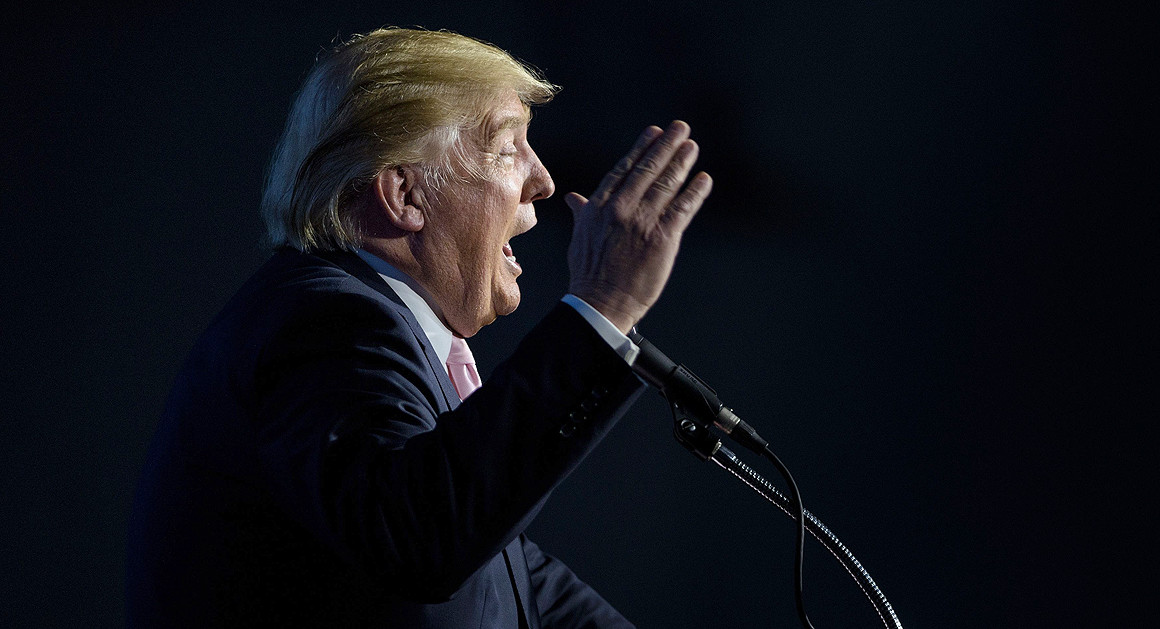 As her lead in most battleground states has grown from single to double digits this week, I’m just imagining Hillary Clinton sitting back with a big bucket of popcorn watching Donald Trump self-destruct.

What is he doing?

Let’s start with Monday.  Lately it seems that Trump tries to start each week on a high note with an “important” policy speech.  And you know it’s “important” because it’s scripted, and he’s reading it off a teleprompter.  First of all, Trump doesn’t do “scripted” very well, and as far as the teleprompter goes, he’s a disaster.  Watch the clips — his eyes are looking at something shiny on the side of the hall, but he’s making zero connection with the faithful in front of him.  True, when he’s on script, he’s not throwing babies out of his rallies, but it’s not letting Trump, for better or worse, be Trump.

Last Monday it was all about the economy, a speech that made zero impact because shortly thereafter he declared President Obama and Hillary Clinton to be co-founders of ISIS, and the week went to hell right there.  So this Monday, he decided to give an “important” policy address on terrorism.  Uh-oh.  And it went just as well as you would expect.

The big news is that Trump would institute “extreme vetting” of potential immigrants.  (You know he was serious because he repeated the word “extreme” three times.)  And what would constitute “extreme vetting?”  He would ask…(get ready for it)…whether a potential immigrant would follow Sharia law or American law.  And if they answered “Sharia law,” he’d toss them right out.  Wow, what a badass.

OK, what if you’re an ISIS terrorist trying to gain entry into the United States and are asked this question.  If you’re really intent on blowing up Times Square, would Trump’s “extreme vetting” force you to answer “Sharia law” when asked?  I didn’t think so.  Say goodbye to the M&Ms store in Times Square.

But the oddest bit of news on Monday was the number of TV pundits who began to speculate that Trump may bail on the election entirely.  Not just the debates (which many people have opined that Trump will find some way to skip), but withdraw from the race totally, as he is facing seriously sinking poll numbers that may signal a catastrophically humiliating defeat in November.  (And one might guess that Trump doesn’t handle humiliation well.)  When Trump’s inept campaign now has even the deepest of red states (such as Georgia or Utah, for God’s sake) as possibilities for a Clinton pick-up, something is seriously wrong.

And that’s the backdrop for Monday’s devastating editorial from the conservative-of-conservative Wall Street Journal saying thus:

“If they can’t get Mr. Trump to change his act by Labor Day, the GOP will have no choice but to write off the nominee as hopeless and focus on salvaging the Senate and House and other down-ballot races.  As for Mr. Trump, he needs to stop blaming everyone else and decide if he wants to behave like someone who wants to be President — or turn the nomination over to Mike Pence.”

Or turn the nomination over to Mike Pence???  Yipes!  And this is from a Rupert Murdoch publication!

It’s 84 days until the election, and if Trump continues to fritter his time away with all of his nonsense, it will have a devastating effect on the many senators and congresspeople down-ballot whose futures rely on his vote gathering skills.  And from the looks of things, many of them may have serious trouble retaining their seats. If his Presidential hopes look seriously threatened right now, at least Trump can do something to help the party to which he has (for now) sworn allegiance keep that majority.  But he needs to do something.  And fast.

Donald Trump’s Pitch to African-American Voters — “What the Hell Do You Have To Lose?”