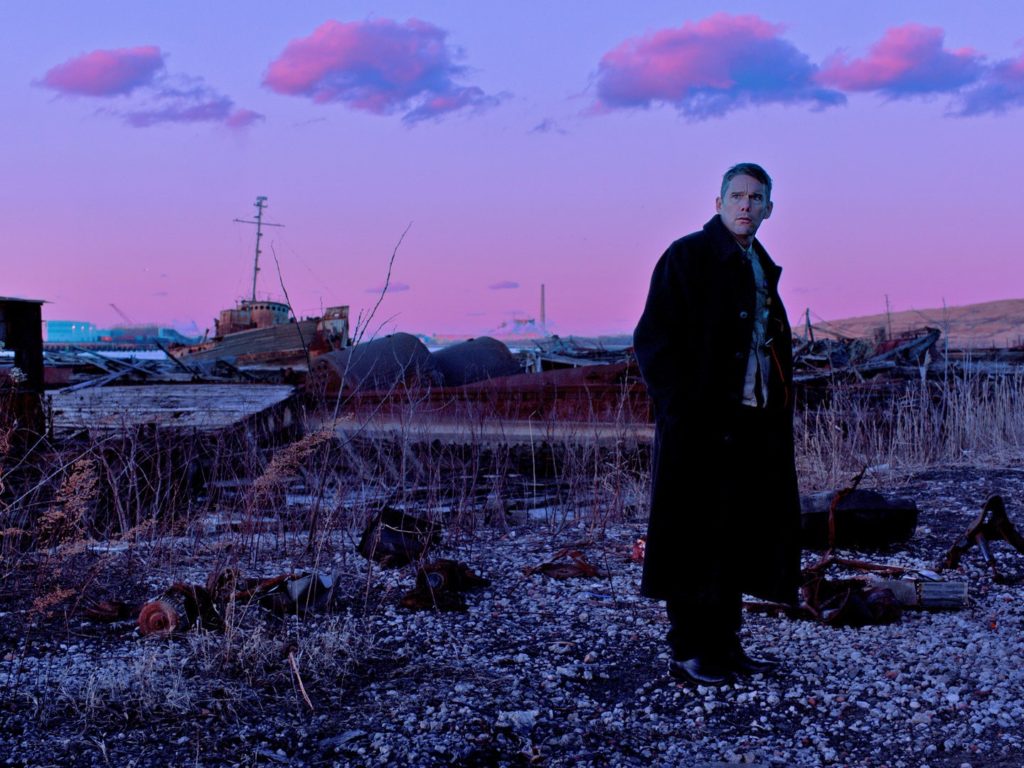 If you’re a fan of the films of the 1970s and 1980s, you’ll know the name Paul Schrader.  He wrote the landmark script for the Martin Scorsese classic “Taxi Driver” (1976), co-wrote Scorsese’s great “Raging Bull” (1980), and was an esteemed director himself, co-writing and directing such films as the vastly underrated “Blue Collar” (1978) with Harvey Keitel and Richard Pryor and “American Gigolo” (1980) with Richard Gere.

After writing such films as Scorsese’s “The Last Temptation of Christ” (1988) and “Bringing Out the Dead” (1999), Schrader went into a fallow period at the start of the 21st century.  But now he’s back, making a smashing return to form in his latest film, “First Reformed.”

Schrader has set his story in a small town in upstate New York, focusing on a Protestant minister, Ernst Toller (Ethan Hawke), who is pastor to a small flock at the First Reformed Church.  His congregation is dwindling, as his parishioners are being attracted to the far more glam 5000-seat megachurch nearby, led by Pastor Jeffers (Cedric the Entertainer), a church with which First Reformed is affiliated.

Rev. Toller came to the clergy later in life, as his marriage was torn apart by a family tragedy, and he spends his days giving tours of the church’s historical grounds and his nights chronicling his thoughts in a journal and drinking.  He is clearly suffering from an ailment but is in no rush to see a doctor in order to deal with it.

After one service, Rev. Toller is approached by parishioner Mary (Amanda Seyfried) who asks him to offer some pastoral comfort to her husband Michael (Philip Ettinger).  It seems that Michael is a radical environmentalist who wants his wife (who is pregnant) to have an abortion because he doesn’t think it’s fair to bring a child into a world that will be devastated 50 years from now by global warming.

Before Rev. Toller and Michael meet a second time, Mary tells the clergyman that she has found an explosive suicide vest hidden in Michael’s garage.  Rev. Toller promises to dispose of it, but…

If you introduce an explosive suicide vest in Act 1….well, you do the math.

Schrader paces his film very deliberately.  Act 1 is very low-key, akin to the pace of a Sunday sermon, and even I thought at one moment, “OK, let’s get going.”  But Schrader is keeping his powder dry, and in Act 3, he gives it to us with both barrels.  By then I was squirming in my seat in suspense, and that’s definitely not a bad thing.

This is one of Hawke’s very best performances, easily his finest since “Boyhood.”  Though he is not the most grandiose of actors, Hawke is particularly understated here, revealing sides of Rev. Toller as if he was peeling back layers of an onion.  He is one with Schrader, telling the story piece by piece with his performance, never letting us see too much until he is ready and then lowering the boom.

A word, too, about the very good performance by Cedric the Entertainer.  Billed here by his real name, Cedric Kyles, his Pastor Jeffers is not depicted as a megalomaniac like TD Jakes or Joel Osteen but refreshingly is instead a kindly man with the same pastoral instincts as Rev. Toller.  But he has a megachurch to financially sustain, so he has to depend on the support of such donors as local industrialist Edward Balq (Michael Gaston).  And that’s where the trouble starts.

Schrader himself was raised in a strict Calvinist Protestant Church, and it’s that church’s streak of necessary atonement that pervades much of his work, one that certainly shows up here.  Schrader provides a voice that struggles with religion, as many of us do, and it’s welcome to see him roaring back in such great voice as he provides in “First Reformed.”

“Hereditary,” the Scariest Movie of the Year By Far, Is Propelled by an Oscar-Worthy Performance by Toni Collette

“Won’t You Be My Neighbor?” — A Moving Testament to the Power of Kindness