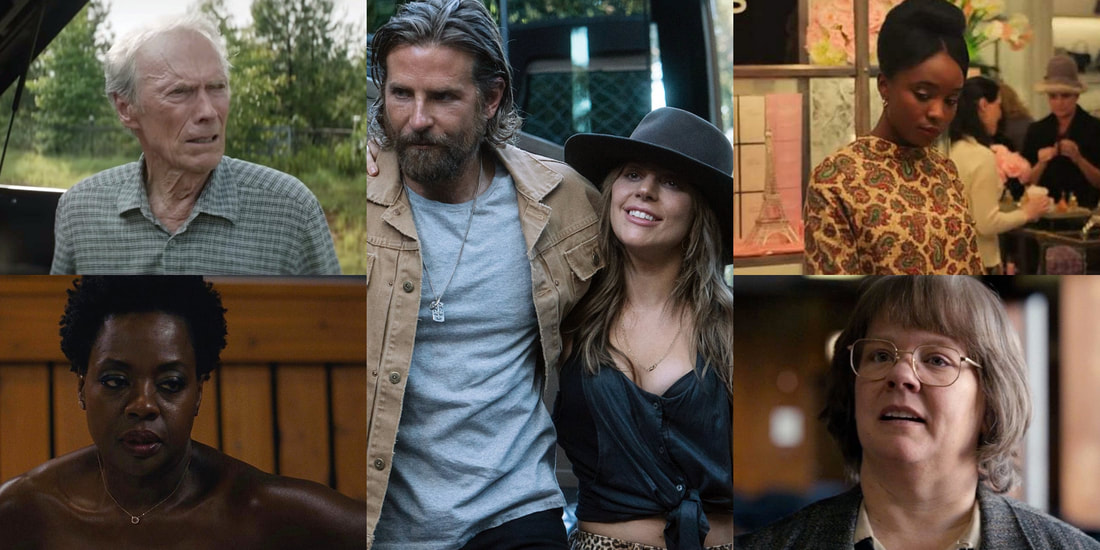 God, I love the Writers Branch of the Academy. In years where almost every other Academy branch seemed to rubber stamp the anointed front-runners, the writers have always gone their own way in their selections for the year’s Best Adapted Screenplay.  In just the last 10 years alone, the Writers Branch has nominated such great films in this category as “Logan,” “Carol,” “Inherent Vice,” “Before Midnight,” “Toy Story 3” and “In the Loop,” in some cases providing these films with their sole nomination.

Based on the track records of the kind of films that writers tend to nominate in this category, I’ve collected 10 of the most likely candidates for the five nomination slots as the year’s Best Adapted Screenplay. As always, there are front-runners included, as well as a few possibilities where the branch might choose to go its own way. The source materials for these ten vary greatly, from memoirs to novels, from biographies to magazine articles, and even a British television series.

Nine of these films have already opened or have been screened, while one (Clint Eastwood’s “The Mule”) I’ve included because of the track record of this director in getting the scripts for his films in for a writing nomination.

There’s no perfect nominee here, as each film has its pros and cons for a nomination, so let’s take a look at the pluses and minuses of each contender (in alphabetical order) as we count down to the final five nominees for Best Adapted Screenplay:

​Written by Charlie Wachtel, David Rabinowitz, Kevin Willmott, Spike Lee
Based on the memoir “Black Klansman” by Ron Stallworth
Spike Lee’s tale of a Colorado Springs cop (John David Washington) who sets out to infiltrate the local chapter of the Ku Klux Klan caused a bit of a sensation in this year’s festival circuit, winning the Grand Prix at Cannes and the Audience Award at Locarno.
PRO: Yes, Spike Lee was awarded an honorary Academy Award in 2015, but I suspect that for Spike (as well likely many Oscar voters), it’s not quite the same as a competitive Oscar. With Best Director so crammed with potential nominees, the path to an Oscar win might be easier (but still much deserved) in this category.

CON: Despite the Academy’s laudable attempts to invite new members who are younger and more diverse, the voting body is still predominately older and white. The question I have is whether the blue-hair crowd will even pop in the screener of “BlacKkKlansman,” much less vote for it? And can the film, given its August release date (which in Oscar World can seem like an eternity ago) be successfully brought back in the current conversation by Focus Features?

Written by Joel Edgerton
Based on the book “Boy Erased: A Memoir” by Garrard Conley

After successful screenings at the Telluride and Toronto Film Festivals, “Boy Erased,” a story of a gay teen (Lucas Hedges) who is forced to undergo gay conversion therapy by his religious parents (Russell Crowe and Nicole Kidman) opened to generally favorable reviews and promising box office.

PRO: The subject matter is timely (writers love to vote for screenplays that can be perceived as “culturally relevant”) and voters will likely see how much more nuanced that Edgerton’s take on the subject is compared to the film’s more didactic trailer.

CON: Unless critical thinking on the film turns it into a “must-see,” “Boy Erased” seems to be relegated to the long-shot tier for a Best Picture nomination, which may, in turn, make it a long shot in this category as well.

CAN YOU EVER FORGIVE ME?

​Written by Nicole Holofcener, Jeff Whitty
Based on the memoir “Can You Ever Forgive Me?” by Lee Israel

In another LGBT-themed film, “Can You Ever Forgive Me?” is based on the memoir by writer Lee Israel about her time as a failing writer who comes into her own as an artist when she plagiarizes personal letters by literary greats.  Initial reviews have been largely stellar.

PRO: Take it on good authority:  writers love to honor other writers who write about writers writing. Who’d have thought? Add to that the writers here are the much-revered Nicole Holofcener (“Friends with Money”) and Jeff Whitty (Tony Award-winner for writing “Avenue Q”), and you’ve got writing royalty. Plus the script is terrific.

CON: Will “Can You Ever Believe Me?” just be a play for Melissa McCarthy and Richard E. Grant, or can the love be extended to this category or even to Best Director?

​Written by Peter Chiarelli, Adele Lim
Based on the novel “Crazy Rich Asians” by Kevin Kwan
This summer box-office hit, based on the best-selling novel by Kevin Kwan, was one of the few well-reviewed movies this year that has had the quality of its screenplay singled out as a key part of the success of the film.
PRO: This unexpected comedy hit engendered enormous goodwill within the industry, and the most logical place to honor it would be in the writing category, much like the Oscar writing nomination that was earned for “Bridesmaids” or “My Big Fat Greek Wedding.”
CON: Except for a possible supporting nomination for Michelle Yeoh, this may be the sole category in which “Crazy Rich Asians” is competitive, which may hamper its chances to grab a nomination from its rivals in this category which includes more serious Best Picture front-runners.

​Written by Josh Singer
Based on the book “First Man: The Life of Neil A. Armstrong” by James R. Hansen
“First Man,” which detailed the 8 years it took for American astronaut Neil Armstrong to step foot on the moon, swept through the fall festivals (Venice, Telluride, Toronto) on a wave of largely terrific reviews, and though the American box-office returns have been surprisingly soft, the subject matter may be right up the Academy’s alley.
PRO: It’s not a sure thing, but there’s a good possibility that the Damian Chazelle-directed biopic will do very well in below-the-line Oscar nominations, perhaps enough so to carry Oscar-winning screenwriter Josh Singer (“Spotlight”) to yet another nomination.
CON: Even among fans of “First Man” with whom I have spoken, it appears to them that the film’s screenplay is thought to be the weakest element of the film with its mixture of technical jargon and limited meaningful dialogue.

THE HATE U GIVE

​Written by Audrey Wells
Based on the novel “The Hate U Give” by Angie Thomas
After a triumphant premiere at Toronto, George Tillman Jr.’s “The Hate U Give” opened in October to much critical acclaim but also with a tragic sidebar story involving the film’s screenwriter Audrey Wells.
PRO: Angie Thomas’ novel (still #1 on The New York Times’ YA Best Seller List after 87 weeks) is much beloved, as is George Tillman Jr.’s film, with particular praise to the screenplay by Wells, who died the day before “The Hate U Give” opened in theaters.
CON: Despite the film’s glowing reviews, The Hate U Give” has been surprisingly absent from much of the Oscar chatter in recent weeks (except for actor Russell Hornsby), so unless Fox can find a way to reintroduce the film to Oscar voters and this screenplay, in particular, it may run the risk of being forgotten.

IF BEALE STREET COULD TALK

​Written by Barry Jenkins
Based on the novel “If Beale Street Could Talk” by James Baldwin
Probably the film that will be considered the most literary thanks to its esteemed source material, “If Beale Street Could Talk” follows an African-American woman (Kiki Layne) seeking vindication for her falsely-convicted husband (Stephan James) before the couple’s baby is born. The screenplay is the latest work by Oscar-winning screenwriter Barry Jenkins.

PRO: Certainly, this is the film that has the highest pedigree in its source material so a spotlight will certainly be on how writer/director Barry Jenkins, who won this category two years ago for co-writing “Moonlight,” adapted the James Baldwin novel to film. Unlike many of its competitors, it’s the success of the screenplay adaptation that will be key as to whether or not “If Beale Street Could Talk” works.

CON: It’s been only a couple of years since Jenkins won this category, and voters might not want to reward him again so soon. Plus this new film may inevitably be compared to “Moonlight,” and that’s a pretty high bar to try to surpass.

​Written by Nick Schenk
Based on The New York Times Magazine article “The Sinaloa Cartel’s 90-Year-Old Drug Mule” by Sam Dolnick
The only contender in this category that has yet to be screened, “The Mule” is based on a magazine article about the world’s oldest (and most prolific) drug mule, who carried narcotics over the border for the Sinaloa cartel. The script was written by Nick Schenk, who also wrote a grumpy-old-man role for star Clint Eastwood in “Gran Torino.”

PRO: Given the fact that, at this writing, we have yet to see “The Mule,” we can only go on the track record that Eastwood-directed films have displayed in the past, including “Unforgiven,” “Mystic River,” “Million Dollar Baby” and “American Sniper” all of which garnered screenplay nominations.

CON: Still, with no screenings for voters at this point in the calendar, it’s getting awfully late to start momentum going for a screenwriter whose only other produced credit is “Gran Torino,” which earned zero Oscar nominations. If “The Mule” wants its screenplay to become a competitive force, it will need to turn up the heat and turn it up quickly.

A STAR IS BORN

​Written by Eric Roth, Bradley Cooper, Will Fetters
Based on the 1937 screenplay “A Star Is Born” by William A. Wellman, Robert Carson, Dorothy Parker, Alan Campbell
One of the many challenges facing producer/director/songwriter/star Bradley Cooper as a co-writer of the script was how to differentiate his film from the many indelible lines associated with the 1937 original and the 1954 & 1976 remakes.  Between critical acclaim and audience response, it appears that he has succeeded.

PRO: With positive word-of-mouth giving the film apparent legs of steel at the box-office, it’s clear that “A Star Is Born” is the movie of this moment at least. And I would guess that most Academy voters have seen at least one of the previous editions of “A Star Is Born,” so that, as a point of comparison, they can see just how accomplished the Roth, Cooper & Fetters screenplay really is.

CON: Given the emphasis on the direction, the performances, and the music, is it possible that what the writing triumvirate might somehow be forgotten or taken for granted? Many other rivals to this film’s screenplay will be coming out between now and the end of the year and might be the new bright shiny object that might make voters forget what’s being done with this version of “A Star Is Born.”

​Written by Gillian Flynn, Steve McQueen
Based on the 1983 ITV series “Widows” by Lynda La Plante
Until Oscar-winning director Steve McQueen’s heist film “Widows” screened at the Toronto Film Festival, there was much online speculation as to whether the genre film could also be considered an “Oscar film.” The resounding answer appears to be “Yes!”
PRO: McQueen’s last film, the Oscar-winning “12 Years A Slave,” also won this category in 2013, and in 2018 with “Widows,”  McQueen takes on co-screenwriting credit along with Golden Globe writing nominee Gillian Flynn (“Gone Girl”). The glow from the “12 Years A Slave” win may still be evident, which can only help “Widows.”

CON: There may still be some Academy voters who are under the mistaken impression that “Widows” is merely a heist film or, worse, not worthy of popping in the screener, waiting instead for films that are more “important.” It will be up to critics (and 20th Century-Fox) to convince those voters that genre and importance are not mutually exclusive.

If you’re looking for the year’s best scripts based on material from another source, look no farther than these ten films.

This article originally appeared on the website Next Best Picture.