“Us,” Jordan Peele’s Follow-Up to “Get Out,” Is Funny, Scary and Deeply Disturbing 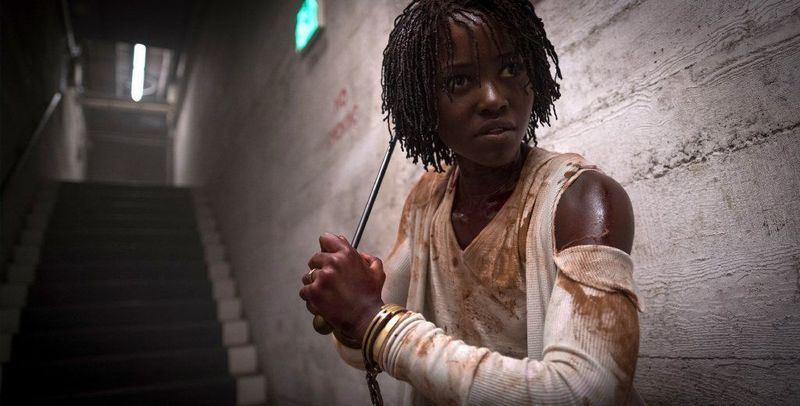 If you were unsettled by writer/director Jordan Peele’s first film “Get Out,” then your nerves may really be rattled by his sophomore effort, “Us.”

Whereas “Get Out,” whose script was a unique amalgam of comedy, horror and satire, earned Peele an Academy Award, “Us” is much more a straight-on horror film, so be warned.  But it’s not a “Boo!” horror film but one that gets under your skin and lasts for days.  Like “Get Out,” “Us” is a complex story, as Peele slowly reveals each layer of the onion piece by piece until he gets to the monstrous secret at its center.

The beautifully-filmed prologue of “Us” begins in 1986, the era of “Hands Across America” (an event that plays a key role in the film), where young Adelaide Thomas (Madison Curry, just great) goes on an evening trip to the Santa Cruz Boardwalk amusement park, where her mom gets distracted and her dad is losing at Whack-A-Mole.  Bored, Adelaide heads over to the park’s hall of mirrors, where she makes a horrifying discovery that will stay with her for the rest of her life.

Cut to the present day, and Adelaide (Lupita Nyong’o) is now a wife and mother, married to her goofy husband Gabe (Winston Duke) and raising her athletic daughter Zora (Shahadi Wright Joseph) and quirky son Jason (Evan Alex).  They’re en route to a beachside vacation in Santa Cruz where Adelaide’s childhood nightmare occurred, and even though the setting dredges up the memories of her trauma in the fun house, she sucks up her fears for the sake of her family.

Adelaide’s anxiety recedes as she spends a perfectly pleasant beach day with her neighbor Kitty Tyler (Elisabeth Moss) and her husband Josh (Tim Heidecker).  She panics, however, when she can’t find Jason, who has wandered off on the beach and seen a disheveled man carrying a sign with the Biblical passage “Jeremiah 11:11,” the very same man who little Adelaide had seen on the boardwalk 33 years earlier.

Once home, the family can relax until Jason sees the silhouette of what looks like a family standing menacingly at the top of their driveway.  Gabe asks them to leave, and when they refuse, he brings out a baseball bat to try to intimidate them.  Not only doesn’t it work, but it prompts the mysterious family to attack the house and hold the Wilson family hostage.  Clad in red jumpsuits and holding sharp golden scissors, the intruders step into the light, revealing that each is a dark, twisted version of Adelaide, Gabe, Zora and Jason.  They are doppelgängers and intent on killing the Wilsons one by one.

More than that I cannot say, but just know that this is just the set-up for “Us.”  The movie is not one of those horror films that throws a few scares at you and then sends you on your way laughing.  “Us” probes subjects that are much deeper and much more disturbing, a film that absolutely gets under your skin.

First of all, let’s get the elephant in the room out of the way.  Is “Us” better than “Get Out”?  Not to hedge, but it’s just different than “Get Out.”  The same sensibility is that shaped “Get Out” is here as well, as well as the filmmaker’s prowess, his thoroughly thought-through script and his playful mixture of horror and comedy.  Although there are several laugh-out-loud moments — and with Jordan Peele behind the camera, how could there not be? — this is horror movie through and through.

Peele’s script, not surprisingly, is filled with movie references from Jason’s “Jaws” T-shirt to wearing his hockey mask, a la the Jason in the “Friday the 13th” series.  There are twins, reminiscent of “The Shining” — the doppelgängers, of course, plus the Tyler family have twin daughters (with twin doppelgängers) and even the Biblical passage Jeremiah 11:11 has a number that’s twinned.

This all seems very clever, of course, but in the end, what does it all mean?  Ultimately, I think that Peele is getting to something much darker — the duality within each of us.  I firmly believe that each of us have a dark force within us, an impulsive side that wants to lash out against other people for purely imagined slights, whether it’s flipping off a driver who cut you off in traffic or fantasizing the murder of someone who has wronged you.  That dark side of you (or “the tethered” as it is referred to in “Us”) is always there, and the film’s warning is not to let that side take over you or else there will be hell to pay.

That vision is brought to light by Peele’s powerful cast.  Duke is a comic delight as the doofus of a dad, with Wright Joseph and Alex providing strong support as the Wilson kids.  And a particular shout out to all three actors for the physicality of each of these actors as their individual doppelgängers.  They speak and (especially) move so differently as the tethered as when they are the Wilsons that it’s sometimes difficult to believe that the same actors are playing both parts.

Still, the heart and soul of “Us” is Academy Award winner Lupita Nyong’o as both Adelaide and her tethered doppelgänger Red is remarkable.  Red is the only one of the tethered who is able to speak but does so in a deep agonizing octive which is in itself terrifying.  As Adelaide, Nyong’o presents us with a self-confident woman who has put her childhood trauma in the past, only to regress into the little girl she was as soon as she sees that fun house again.  So in order to take on the tethered, Adelaide must summon all of her strength to save herself and protect her family.  It’s a bravura performance from Nyong’o, and after last year’s great work from Toni Collette in “Hereditary” and Jamie Lee Curtis in “Halloween,” it’s has become clear that women now own the horror genre.

The below-the-line work here is great, particularly the first-rate score by Michael Abels and the film’s sound design, which is every bit as good as last year’s Oscar-nominated “A Quiet Place.”

With all these plaudits, it may sound like my grade may be in the “A” territory, but I can’t go that far because the film’s great drawback is an awkward sense of pacing.  Some scenes, particularly in the film’s middle section, simply go on too long, while others are not long enough, resulting in a push/pull feeling that took me right out of the movie.

Still, with a film this original, it’s a relative quibble compared with the imagination that Peele displays in the rest of the film.  Thinking back on “Us,” I am reminded of the great quote from the comic strip Pogo that could serve as the logline for Peele’s terrific film: