“Downhill” Is an Apt Description of the Trajectory of Its Script 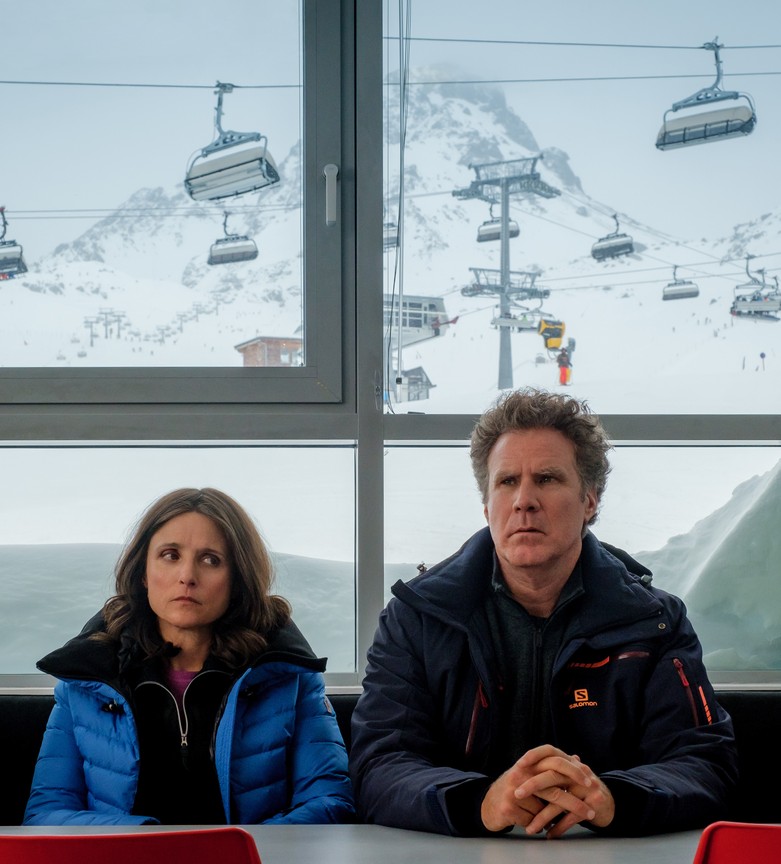 Sometimes — OK, most of the time — American remakes of successful European films become a pale copy of the original.  Yes, “Three Men and a Baby” was good, as was “The Birdcage.”  But they’re the exceptions that prove the rule.

Co-writers/directors Jim Rash and Nat Faxon won Oscars for co-writing 2011’s “The Descendants” and co-wrote and directed the delightful 2013 Sam Rockwell comedy “The Way Way Back.”  This time, they’re teaming up to remake the highly-regarded Swedish comedy/drama “Force Majeure,” which focuses on a vacationing family whose varying reactions to a potential avalanche threaten the stability of their marriage.

After eight months, Pete Staunton (Will Ferrell) is still grieving the death of his father, so he decides to take his family on a skiing vacation in the Alps to take his mind off his grief.  Things go well at first, but when a controlled avalanche (which almost all ski resorts do) appears to get out of control and threatens the family as they have lunch on an outdoor deck, Pete grabs his phone and runs, while his wife Billie (Julia Louis-Dreyfus) stays to shield their two sons, Finn (Julian Grey) and Emerson (Amman Jacob Ford).

Pete’s instinct to choose his own survival before that of his family does not go unnoticed by Billie, who is anxious to confront him over his cowardice, but circumstances prevent her from having it out.  Unfortunately, she finally gets her chance in front of one of Pete’s co-workers, and the rift that results from that confrontation creates such a rift within the couple that their entire marriage might be in jeopardy.

“Force Majeure” saw this story through the lens of toxic masculinity, but “Downhill” takes a different tack, depicting the narrative through Billie’s point-of-view — the more Pete comes up with lame excuses for his behavior, the more distant that Billie becomes.

I’m never really comfortable with using the qualities of the original to beat down its remake, but “Force Majeure” successfully walked a tonal tightrope — its comedy always seemed to be aware of the drama behind it, and the drama incorporated the comedy.  With the casting of Ferrell, “Downhill” tips far into comedy, and when Louis-Dreyfus is not present, Ferrell’s antics threaten to turn the film into a yuk-fest, absolutely the wrong tone for this material.  Louis-Dreyfus, however, seems to get what the tone should be, and she is pitch perfect as Billie.

Rash and Faxon’s direction is fine, although it lacks the spark that made “The Way Way Back” so special.  At times, however, it simply seems that they are copying Ruben Östlund’s work on the original, with diminishing success — in fact, several sequences (including the avalanche scene) appear to be a shot-for-shot reproduction of “Force Majeure.”

To be blunt, what’s the point?  Why go to all of the effort to remake a great film like “Force Majeure” when the original exists already?  Much better to remake a lousy film that has a great story but was botched the first time.  The 2020 film calendar promises all kinds of remakes, and hopefully some will be as good as Greta Gerwig’s “Little Women.”  But don’t count “Downhill” among the good ones.

In the Indie Film “Standing Up, Falling Down,” Billy Crystal Delivers His Best Performance In the Last Two Decades