Now Playing in Your Living Room: Mackie & Jackson Team Up to Bring Life to the Mediocre “The Banker” 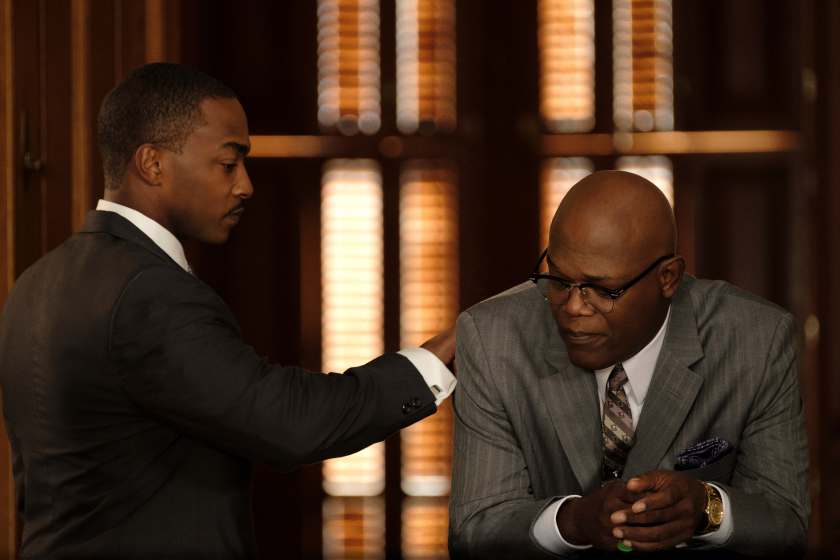 The real-life drama, “The Banker,” is Apple TV+’s first foray into motion picture production, and like most of the programming I’ve seen so far on the fledgling streaming service, the results are a mixed bag.

Last fall, Apple aimed to make its first feature a player in the awards season race, and they successfully nabbed the closing night slot in L.A.’s American Film Institute Festival, which in the past has proven to be a major springboard into the Oscar Best Picture race for many films. Unfortunately, just before the film began screenings, Bernard Garrett Jr., the son of the film’s lead character, played by Anthony Mackie, was accused of childhood sexual abuse by two members of his own family.

Apple realized that this accusation could be enough to hobble “The Banker” before it even got out of the gate, so they wisely withdrew it from the awards race and instead scheduled a two-week theatrical run on March 6, followed by its Apple TV+ premiere two weeks later. Being Apple TV+’s sole original film will likely get it a lot of eyeballs during this home quarantine period, as it should because there’s much to like in “The Banker.”

As a young child in Texas, Bernard Garrett ran a shoeshine stand just under the open window of a bank’s conference room, and the inside tips on the banking world he picks up are carefully transcribed and studied by Garrett. Convinced that he wants to get into real estate, the adult Garrett (Mackie) travels with his wife Eunice (Nia Long, in a lovely performance) to settle down in Los Angeles to try his hand there.

It’s 1959, and Garrett’s efforts to purchase real estate in white neighborhoods are met with a slammed door. When his one financial backer in town drops dead, Garrett is at a loss until Eunice suggests he seek backing from her boss, flamboyant night club owner Joe Morris (Samuel L. Jackson). Forever smoking and drinking, Morris is intrigued by the square Garrett and becomes determined to do what he can to remove the stick up his butt.

“The Banker” is hardly a funny film, but the rhythms of the relationship between Garrett and Morris are very reminiscent of the best buddy comedies. Mackie is great as the straight man of the team, and Morris is such a perfect Sam Jackson role – I can imagine him looking at every take as a new chance to party, which he does.

Morris knows how L.A. works and realizes that they will need a white face to front their partnership if they’re going to buy real estate in white neighborhoods. Garrett calls on Matt Steiner (Nicholas Hoult), a white working-class kid who knows little outside of his job. The second half of the film becomes an all-male twist on “My Fair Lady”: Morris teaches Steiner how to drink like a mogul and play golf (not pretty), while Garrett teaches him how to dress, as well as the banking business. Finally, when they think their job is done, they send him out into the world.

The third act is where “The Banker” should be soaring, but unfortunately, it just lies there. Granted, the screenwriters (Niceole R. Levy, George Nolfi, David Lewis Smith, and Stan Younger) may have been hamstrung by having to follow the actual events as they happened, which don’t exactly follow a satisfying Hollywood ending. But at this point, director Nolfi, who has been largely carried along in the first two acts by the chemistry of his stars, can do little to keep the narrative involving. It’s not that he has a bad style, it’s that he has no style. Despite a few moving moments between the two leads, the denouement never really pulls together, and as the credits roll, you feel like you really want more – and not in a good way.

The Ten Best Election Films Ranked, From “Primary Colors” to “The Candidate”