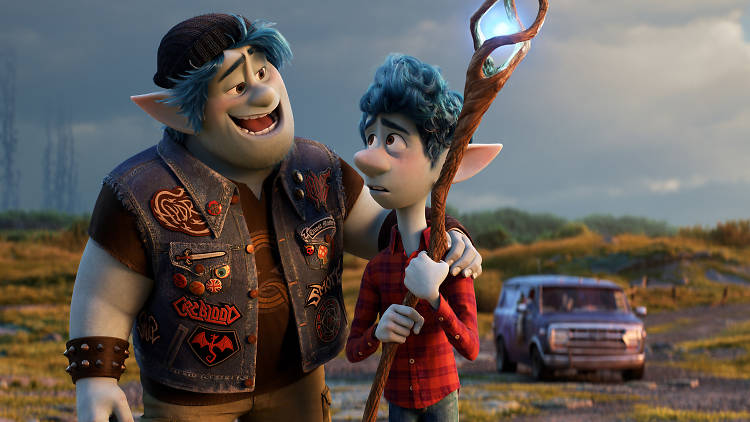 I must admit that when I first saw the trailer to Pixar’s 22nd feature film, “Onward,” which is now streaming on Disney+, I was little put off by it.  The jockish bro nature of the humor seemed very unlike the smart tone that we’re used to from the studio that brought us “Up” and “Inside Out.”

Once I saw the actual film, however, the premise of the film struck me as so unusual that the jockiness quickly faded into the background.  In an unexpected prologue, we are taken back to a medieval time when magic ruled in a society filled with elves, centaurs and dragons.  Gradually, however, the importance of magic seemed to fade before it disappeared altogether.

Cut to present-day suburbia.  Magic may be gone, but the elves, centaurs and dragons are still very much with us, populating a town in lovely cookie-cutter homes shaped like mushrooms.  Adult elves drive cars, teen elves text on their smart phones and houses are filled with other familiar luxuries.

It’s the 16th birthday of shy elf Ian Lightfoot (voiced by Tom Holland), who lives with his widowed mom Laurel (Julia Louis-Dreyfus) and his older brother Barley (Chris Pratt) who is obsessed with a medieval-set board game and is anxious to set out on quests of his own.

Laurel presents Ian with a birthday gift from his late father Wilden — a magical staff, complete with a special gem, and a spell, which if done correctly will bring their father back to life for just 24 hours.  Ian accidentally gets the spell to work, but halfway through, the gem’s power gives out and only the lower half of Wilden’s body materializes.

Yet Barley puts together a series of clues and figures out just where they can find another magic gem, and before they know it, the brothers pile into Barley’s rickety van named Guinevere, and they’re off.  Barley at last has found his quest.

Unfortunately, the Pixar magic is only spottily there in Act 2, both visually — much of the action takes place within the four walls of Barley’s van — and narratively — with what seems like endless variations of “Weekend at Bernie’s.”  Despite the welcome voice presence of Olivia Spencer as The Manticore, a former warrior who is now reduced to running a Chuck E. Cheese-type restaurant, I got a sinking feeling as the story progressed that “Onward” may not quite be Pixar-quality material.

So I was very surprised when “Onward” began to rally as the story came to its climax, so much so that I found myself muttering, “Dammit, Pixar, you’re not going to make me cry again.”  (I completely blubbered at “Inside Out,” and “Toy Story 2 & 3,” to name but a few.)  Stay strong, Tom, stay strong.  You won’t be surprised that I wound up bawling at the final emotional hug.  Even better, “Onward” manages to bring its unlikely plot strands together for a stirring, satisfying conclusion, one that earns every tear that’s shed.

“Onward” may not approach the Pixar greats, but most of it is a lot of fun and well worth streaming.

Now Playing In Your Living Room: Why Has Netflix’s “Tiger King” Turned Into a Cultural Phenomenon?

Cate Blanchett Headlines Her First American TV Series in “Mrs. America,” and the Result is Triumphant