Pork Chop on a Stick 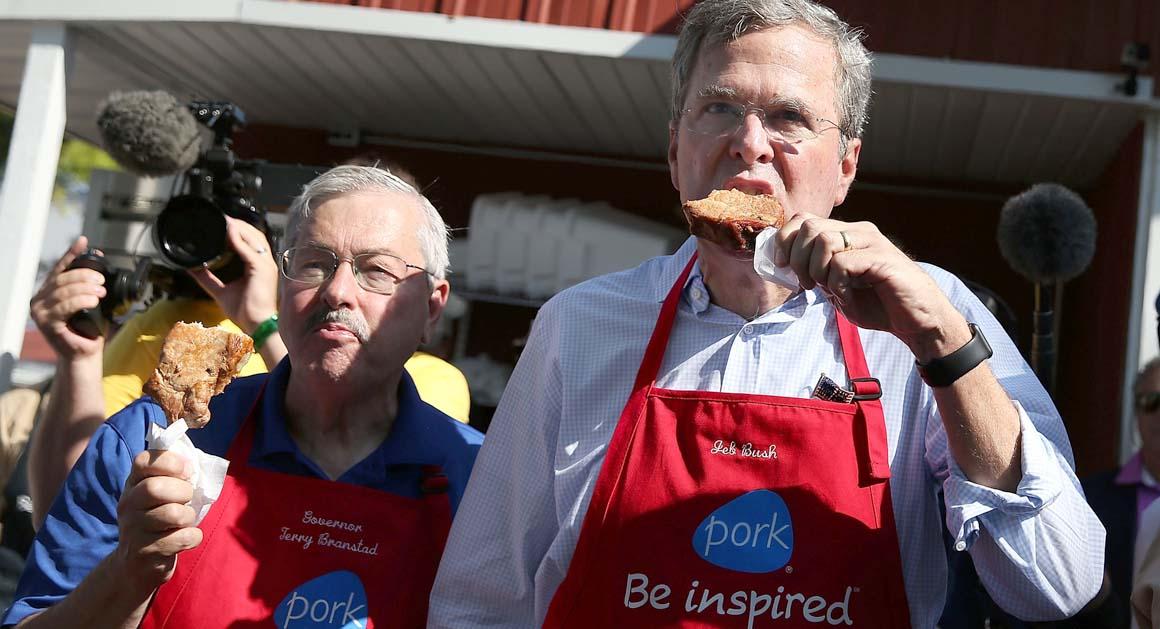 Step right up, ladies and gentlemen, and witness for yourself the strangest annual ritual in the 2016 campaign to become President of the United States!  SEE a billionaire reality-show star offer kids a ride on his big blue helicopter!  SEE an array of anti-gay politicians being photographed while deep-throating a corn dog!  SEE a parade of blow-dried candidates being cheered and jeered as they try to win votes while standing on a bale of hay!  That’s right, ladies and gentlemen, boys and girls….it’s the Iowa State Fair!

If the 2016 primary process is a sideshow, it’s only right that its weirdest ritual takes place at an actual carnival.

The Fair itself has been a tradition since 1854.  But it wasn’t until The Des Moines Register newspaper introduced the Presidential Soapbox that it became a mandatory stop on the long road to the White House.  On the Soapbox, which is actually several bales of hay, even the most uptight of candidates wear blue jeans as they deliver their campaign stump speeches in the Iowa sunshine, even though they run the risk of face-to-face heckling from the always-vocal Iowa crowd.

And that heckling can sometime factor into the election.  While standing on the haybale in 2012, Mitt Romney made his infamous “Corporations are people, my friend” response to a heckler, a quote that dogged him right up to his Election Night loss.

On Friday Jeb Bush mounted the Soapbox (and was heckled), while Bernie Sanders drew the largest crowd (to date) on Saturday.  Donald Trump and Hillary Clinton also made it to the Fair on Saturday, but both declined to speak on the Soapbox — Trump, because he’s feuding with the Des Moines Register’s editors, and Hillary…well, just because.

Today’s visitors included Lindsey Graham and Carly Fiorina, as well as one-time Iowa front-runner Scott Walker, born in Iowa and the governor of neighboring Wisconsin, who has seen his once-formidable lead in the Iowa polls swept away by insurgent candidates Trump and Ben Carson.  Walker, who made his national reputation by fighting teachers unions, was predictably heckled by a pro-union voter, but the governor turned it around by claiming a fighting-for-the-people chant that got the crowd cheering.

Sometimes, between the pork-chop-on-a-stick and the butter sculpture of a cow, the Iowa State Fair can actually provide a glimpse of how a Presidential candidate can react when under fire.  And how they can eat a corn dog.