“Popstar: Never Stop Never Stopping” Could Have Been Hilarious as a Short, But as a Feature? Not So Much 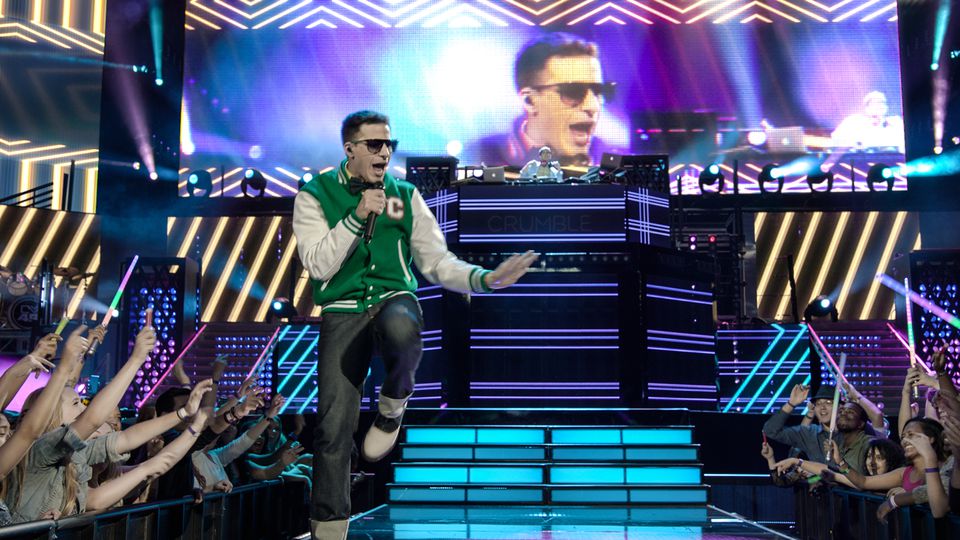 In a week filled with a horrific shooting and dangerous Trumpian hyperbole, I’m in the mood for a little pop music nonsense.

A full-frontal satire of the kind of vanity music documentaries such as “Justin Bieber: Never Say Never,” from which this film presumably got its name. “Popstar” follows the rise of Connor Friel (Samberg), the front man for a trio of white rappers known as the Style Boyz.  Connor is clearly the breakout star of the group, and he soon decides to go solo, leaving behind his bandmates and childhood friends Owen (Taccone), who agrees to step down to serve as Connor’s DJ and Lawrence (Schaffer) who, embittered because Connor took credit for a track that he wrote, drops out and becomes a Colorado farmer.

Connor renames himself Connor4Real and releases his first album “Thriller, Also” which is a smash and catapults him to superstar rank.  “Popstar” actually begins with Connor4Real, very full of himself, awaiting the anticipated raves for his follow-up album “Connquest,” which relies on the input of scores of outside producers rather than the beats once supplied by Owen.  The reviews, however, are disastrous, and sales of the album are puny.

When his concert tour fails to stir much business, Connor goes into panic mode.  He acquires tour sponsorship from Aquaspin, a line of home appliances that play songs from “Connquest” whenever you open the refrigerator door.  The move not only prompts a strong public backlash but also a nationwide power blackout for which Connor is held responsible.  At that point, he is desperate.  He adds an underground hip-hop artist, Hunter the Hungry (Chris Redd), to open for him, but as Hunter becomes more popular, his opening set becomes longer and longer and longer.  Connor then tries to incorporate magic into his set, which results in a disastrous viral moment, and his final grasp for the spotlight involves proposing to his arm-candy girlfriend, actress Ashley Wednesday (Imogen Poots), live on TV in a ceremony featuring Seal and a pack of live wolves.  Live wolves are never a good thing for live TV, and things end especially badly for Seal.

At this point, “Popstar” simply runs out of ideas, and we’re only an hour into the film.  Though one of the shortest features in recent memory (it only runs 86 minutes including credits), it feels much much longer, especially in the last half-hour.

This is not to say that there aren’t any sharp insights in the film.  Though satirizing the commercial nature of the music is pretty easy pickins, the appropriation of rap by white artists is given a solid roasting.  (And it’s hilarious to see the video testimonials of such legit rappers as T.I., RZA, Akon, Questlove, Snoop and 50 Cent falling all over themselves in praising how they were influenced by the brilliance of the Style Boyz.)  And the absurdity of commercial ties between a rapper and a refrigerator makes its point hilariously.

Best of all is a running gag satirizing TMZ, with a Harvey Levin-type (Will Arnett) leaning into his giggly colleagues’ cubicles, gossiping while sucking on a soda cup that gets larger and larger as the film goes on.

But with the continued presence of Owen and Lawrence in the storyline, there’s no doubt where the film is headed, and once you realize that, an audience can get impatient for the film to get there.

Samberg is wonderfully clueless as the puffed-up pop star, and Taccone and Shaffer (who co-directed the film and are co-writers with Samberg) are fine as Owen and Lawrence.  But the film’s one really good performance comes from “SNL” alum Tim Meadows as Connor’s manager Harry, who has to handle his high-strung client while trying to stop him from accelerating his career freefall.  Meadows delivers an extremely thought-out performance, modulating his tone as the film goes on so that when he needs to turn things up, he socks it home.  Meadows shows us skills we’ve never seen from him before, and I hope this is the first of many film appearances to come.

“Popstar” will undoubtedly look great in short viral clips, as The Lonely Island have proven themselves the masters of the comedy short form.  But 86 minutes is a long time to stretch out an idea that might have been better off as a series of shorts.  The Lonely Island might have a feature-length idea in them yet, but “Popstar: Never Stop Never Stopping” isn’t it.

After Trump Questions the President’s Loyalties, Obama & Clinton Double-Team Him