After Trump Questions the President’s Loyalties, Obama & Clinton Double-Team Him 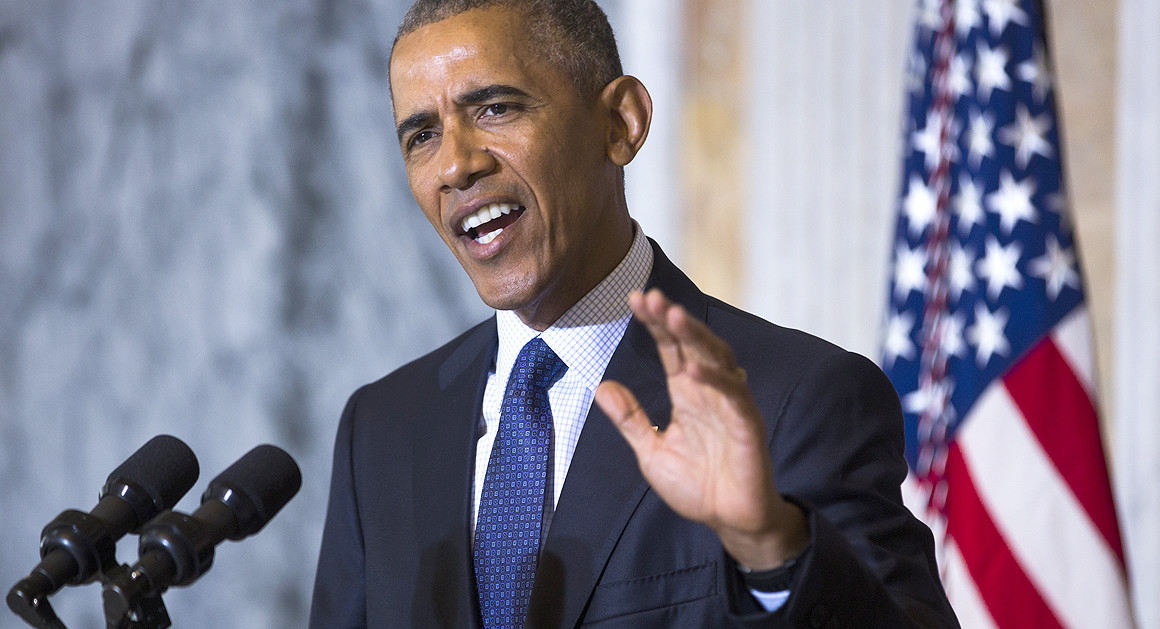 President Obama and presumptive Democratic nominee Hillary Clinton hit back on Tuesday with a powerful one-two punch against Donald Trump’s accusations following Sunday’s massacre of 49 people at a gay nightclub in Orlando, FL.  It was likely the strongest attack against Trump yet — not to be crude here, but Obama was pissed.

Let’s set the table.  After the Orlando shooting, Trump immediately went on Twitter to congratulate himself for predicting that there would be another terrorist shooting in the U.S. without even offering any condolences to the bereaved until midday Sunday.  He then went back to his comfort zone with a Monday call to “FOX & Friends” where he unloaded this gem:

“We’re led by a man who is a very — look, we’re led by a man that either is, is not tough, not smart, or he’s got something else in mind,” Trump said. “And the something else in mind, you know, people can’t believe it. People cannot — they cannot believe that President Obama is acting the ways he acts and can’t even mention the words radical Islamic terrorism. There’s something going on. It’s inconceivable.”

Huh?  Wait.  Wha?  “He’s got something else in mind?”  “There’s something going on?”  What does that even mean?  It would appear that Trump is insinuating that, because Obama won’t say the Trump-approved phrase, “radical Islamic terrorism,” he’s not totally on board with fighting ISIS, that perhaps he’s really in league with the views of the Orlando shooter.  Who knows?  Trump will likely say that he’s just asking a question.

That was just the appetizer.  Later on Monday, at what was billed as a serious address on terrorism (and you know it was serious because Trump dusted off his Teleprompter), Trump used the Orlando shooting to restate some of his wackier foreign policy proposals, particularly about immigration.  Hoping to tie the massacre into his own ideas, he noted that the shooter, Omar Mateen, could have been prevented from entering this country because he was “Afghan.”  The only problem with that talking point is that Mateen was born in the radical stronghold known as….Queens.  Interestingly enough, that borough is the very same birthplace of one…. Donald J. Trump.  I’m not saying that Trump was in cahoots with his fellow Queens-ite, but…. was he?

Trump also expanded his proposed ban on all Muslims entering the U.S., now saying that travelers from any place around the globe where terrorism thrives (Queens?) should be banned as well.

The response from Republican lawmakers to Trump’s proposal by Tuesday was crickets.  I have never seen as few Republicans anxious to go on camera to defend their presumptive nominee as I did today.  That void made for a perfect opportunity for President Obama and Hillary Clinton to strike back.

Traditionally, outgoing Presidents don’t inject themselves into the political campaign for their successors, but, for international relations alone, Obama couldn’t let Trump’s words hang out there unanswered.  (Jeb Bush did that and now he’s likely working at a Denny’s.)  The President argued that Trump’s ban on all Muslims makes America less safe and goes against the diversity that makes America great.  If voters support Trump’s ban, then “the terrorists will have won.  And we cannot let this happen.  And I will not let this happen.”

“If we fall into the trap of painting all Muslims with a broad brush,” Obama observed, “then we are doing the terrorists’ work for them.”

Regarding his unwillingness to use the phrase “radical Islamic terrorism” which, the President argues, links a religion with a behavior, he said,

“What exactly would using this label accomplish? What exactly would it change?  Would it make ISIL less committed to try and kill Americans?  Would it bring in more allies? Is there a military strategy that is served by this? The answer is none of the above.  Calling a threat by a different name does not make it go away.”

At almost the same time that Obama was arguing that “there’s no magic in the phrase ‘radical Islam’,” Clinton, at a speech in Pittsburgh, mirrored the President’s message, saying that

“[Trump] is fixated on the words radical Islam.  Now, I must say I find this strange. Is Donald Trump suggesting that there are magic words that once uttered will stop terrorists from coming after us?”

Regarding Trump’s propensity to pat himself on the back, Clinton added,

“Maybe we shouldn’t be surprised.  But it was one thing when he was a reality TV personality, you know, raising his arms and yelling, ‘You’re fired.’ It is another thing altogether when he is the Republican Party’s presumptive nominee for president. Americans, we don’t need conspiracy theories and pathological self-congratulations. We need leadership, common sense and concrete plans because we are facing a brutal enemy.”

Today marked the first day that it became apparent what an effective team Clinton and Obama could conceivably be in the general election.  Add to that, Bill, Biden, Bernie (eventually), Elizabeth Warren and Clinton’s VP pick, and you’ve got a deep bench of surrogates for the presumptive Democratic nominee.

And how did Trump react to this pushback?  He changed the subject, tweeting

“Thank you to the LGBT community! I will fight for you while Hillary brings in more people that will threaten your freedoms and beliefs.”

Thanks, Donald.  I think we’ll pass.

“Popstar: Never Stop Never Stopping” Could Have Been Hilarious as a Short, But as a Feature? Not So Much