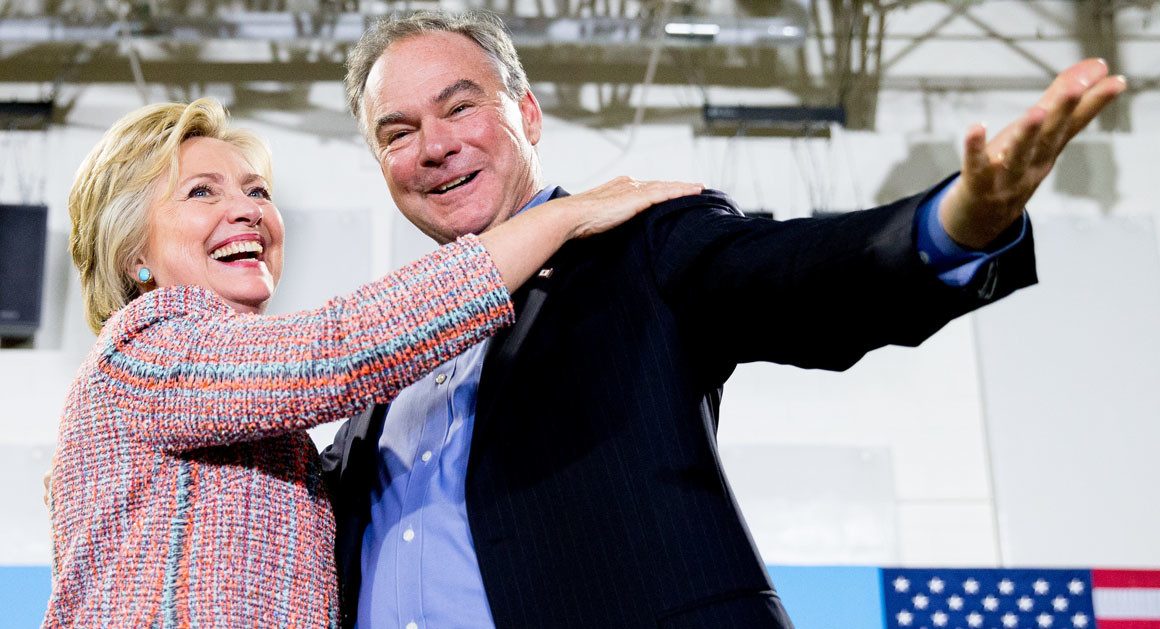 So it was Tim Kaine after all.

On Friday evening, Hillary Clinton announced via Twitter that the Virginia Senator was her choice to be her running mate as Vice-President.  Kaine joined Clinton for the official introduction on Saturday afternoon at Florida International University in Miami, a school where 60% of the student body is Latino.  (And the fact that Kaine speaks fluent Spanish was a fact not likely lost on Clinton.)

Kaine was the front-runner ever since speculation about the Clinton veepstakes started.  His resume seemed tailor-made for the Vice-Presidency.  He has experience in local government (as Mayor of Richmond), in state government (as Governor of Virginia) and in federal government (as U.S. Senator from Virginia).  He has foreign policy experience (serving on both the Senate Armed Services Committee and the Foreign Relations Committee), and he knows Democratic politics, serving as the head of the Democratic National Committee.

Though he checks off all these boxes that Clinton needs as a running mate, Kaine is not without a few drawbacks.  Bernie Sanders supporters will likely not be cheered by Kaine’s selection — he favors loosening financial regulations on banks, and he had in the past supported the Trans Pacific Partnership trade deal that both Clinton and Sanders oppose, though now he’s modifying his stance a bit.  His votes on abortion rights are 100%, although he has stated that he is personally opposed to abortion.

But Clinton did not have a whole lot of progressive options from whom to choose.  Sanders’ lengthy refusal to support her probably ruled him out quickly, and the two most likely progressive candidates, Sen. Elizabeth Warren (D-MA) and Sen Sherrod Brown (D-OH), each hail from states with Republican governors who, if either were chosen and elected VP, would certainly appoint a Republican to take over their seat, thus endangering the Democrats’ attempt to retake the Senate.  (Virginia’s governor is a Democrat and a Clinton ally, so picking Kaine was safe.)

The other plus that Kaine possessed is that he’s just a little bit boring.  When potential VP candidates auditioned with Clinton over the past few days to see whether there was chemistry, several frankly overwhelmed Clinton — Warren was brilliant in delivering the devastating one-liners against Trump and Sen. Cory Booker (D-NJ) showed unbounded enthusiasm on the campaign trail but both upstaged her left and right, and only a masochist would want that in a Vice-President.  Tim Kaine is absolutely charming, but there’s no chance in the world that he could overpower Hillary Clinton.  Still, a good dose of charm is something that Clinton could put to good use.

The table is now set for the start of Monday’s Democratic Convention in Philadelphia.  Be there or be square!

Democratic Convention Preview: Debbie Does (Not Do) Philadelphia