Democratic Convention: Day 2 — After the Boo-Birds Flew Away, the Evening Belonged to Bill Clinton 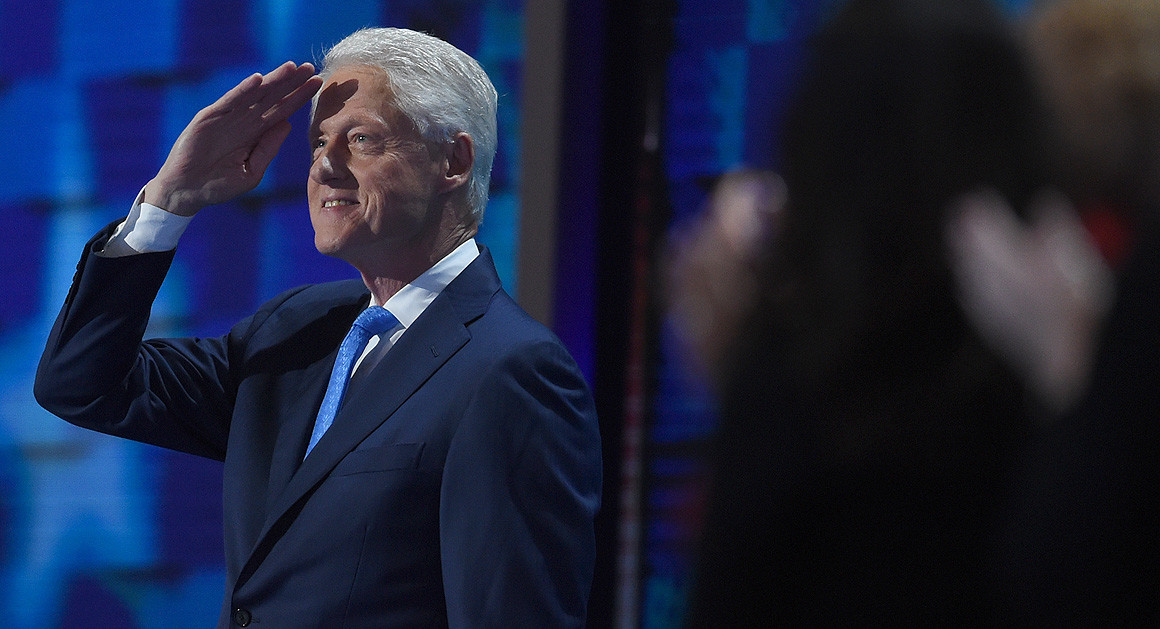 I know that this is probably taken for granted right now, but history was indeed made on Tuesday when Hillary Clinton was officially nominated as the first female ever to be nominated by any major party as President of the United States.

OK, history done, let’s get to the backbiting.

To begin with, the boo birds who made such a presence on Monday, booing the opening prayer and civil rights legends and Elizabeth Warren, have apparently flown away, because Tuesday at the convention appeared to reflect a much more unified party.

The convention day began with my favorite part – the roll call of the states.  This is where each state’s office aspirants are given the chance to tout their states’ special features (did you know that Idaho had the nation’s deepest gorge?  I didn’t.).  You’d never know it, but this is a very political part of convention negotiation.  The Republicans traditionally allow the state of the presumed nominee put the candidate over the top — just as Donald Trump Jr. in the New York delegation did it in the GOP Convention.

The politics in the roll call of the states this year belonged to Bernie Sanders.  What the Democrats have done (as opposed to the Republicans) is let the losing challenger’s state put the winning candidate over the top. So Vermont would clearly be the designee.  But to his credit, Sanders wanted to do it his own way.  Instead of the state that puts the winning candidate over the top calling for the nomination to be by acclamation, Sanders asked (and got) an arrangement by which every state had a chance to vote so that Sanders delegates in every state could have their votes recorded.  Vermont went last, and after their votes were recorded, Sanders got up as ask that Clinton be declared the Presidential nominee of the party.  Classy stuff.

The big draw of the evening was the speech of the nominee’s spouse, who just happened to be the 42nd President of the United States, Bill Clinton.  Looking a lot less frail than he has recently appeared on the campaign trail, he began his speech in a most unorthodox way, telling the story about how he first fell in love with Hillary, trying to woo her when he thought she wasn’t giving him the time of day, through the early days of their marriage, their raising of Chelsea and then to one of Bill’s fondest memories, the sight of Hillary putting contact paper in the drawers of Chelsea’s dorm room when she first arrived at Stanford.

The folksiness of the opening put off some female commentators (particularly MSNBC’s Rachel Maddow and Nicole Wallace for Bill’s references to Hillary as a “girl”), but you can’t forget that Bill Clinton is a master storyteller, and he has a purpose for every reference.  Here, he would argue, is the real Hillary, not the cartoon who is presented in some parts of the media.  “The real one” became the motif of the rest of his speech, outlining the many achievements that Hillary managed to accomplish throughout her life, with Bill noting each time that this was achieved by “the real one.”

It was both a loving speech and a political speech. with Bill weaving them together as only he can.  Though at times on the trail he can be knocked wildly off message, much to the chagrin of the Hillary campaign, on Tuesday night, he came across not only as Hillary’s cheerleader but also, despite his past history, as a husband who loves and admires his wife very much.  When that endorsement comes from an ex-President, it gives it added weight.

Wednesday night promises some heavyweights at the podium, including President Obama, Vice-President Biden, former New York Mayor (and ex-Republican) Michael Bloomberg and the newly-anointed Vice Presidential candidate Tim Kaine.  Buckle up, and be there or be square!