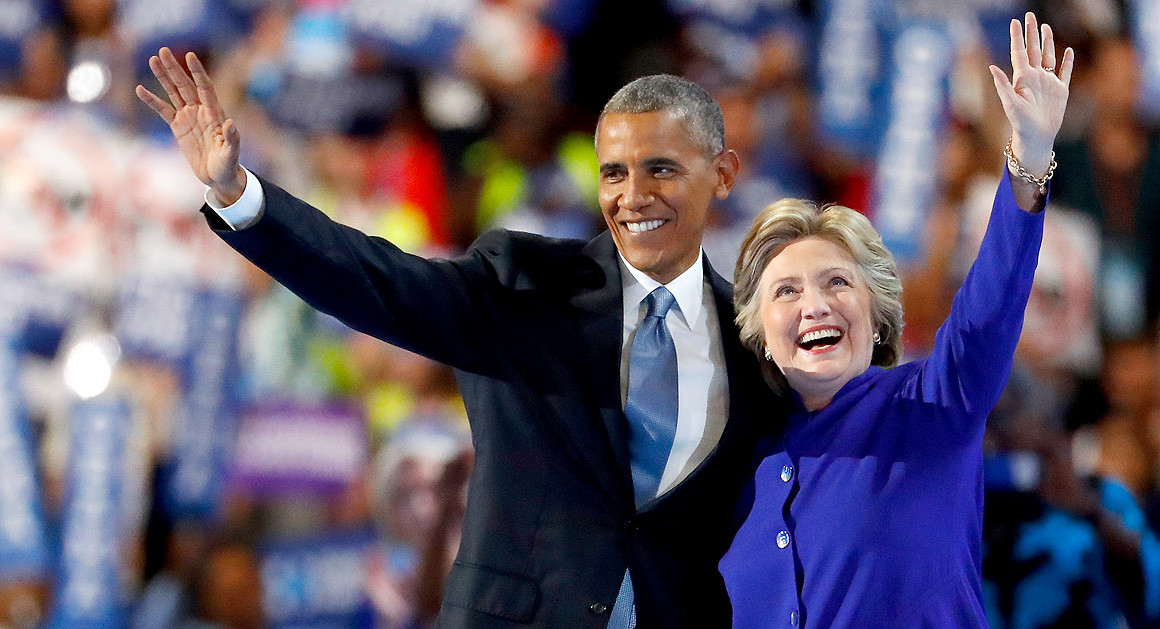 Wednesday night was supposed to be the night when the big guns at the Democratic National Convention came through.

So Donald Trump, as is his wont, decided to try to steal the headlines from the DNC by making some headlines for himself.  And he did, and the one he chose was a doozie.

At a press conference in Florida on Wednesday morning, Trump stated that, since Russian hackers allegedly penetrated DNC files, if they did the same for the e-mails that Hillary Clinton supposedly purged, why not reveal them?

It’s not exactly treason, but it’s close, as many legal scholars have noted.

Wednesday night produced the strongest line-up of speakers I’ve seen at a convention in recent memory.  Kicking things off was Vice-President Joe Biden.  Laugh at me if you will, but I just love Joe Biden.  There is an exuberance to him that I associate with politicians when I was growing up, the love of diving into a crowd and shaking as many hands as he can find.  And yes, he puts his foot in his mouth once in a while, but don’t we all?  But his regular-guy way of speaking his been crucial to getting white males to pay attention to this administration.

Biden cited Trump’s “Make America Great Again” slogan and argued that America’s is “pretty damn great already.”  Acknowledging his own nickname “Middle Class Joe,” which he notes in Washington is not meant as a compliment, Biden owned it, arguing that the middle class is what helps to keep America united.  “I know why we are united. It’s because we’ve always had a growing middle class. This guy doesn’t have a clue about the middle class — not a clue…He has no clue about what makes America great.  Actually, he has no clue.”  (The chant “No Clue!” began to ring through the hall.)

Biden then brought it home with classic Biden:  “He tries to tell us he cares about the middle class?  Give me a break!  That’s a bunch of malarkey!”  That’s the other reason I love Joe Biden.  He can say a word like “malarkey” and it sounds perfectly natural.  I’m going to miss him.

Wednesday night was the first formal national introduction for Vice-Presidential nominee Tim Kaine.  Kaine possesses some of the same regular-guy charisma as Biden — Brian Williams noted that Kaine is the kind of guy “you’d see every week at Sunday Mass” — and would be only the second Roman Catholic ever to serve as VP.  (Biden was the first.)

Kaine’s speech was fun — he certainly is putting a happy face on the Democratic Party, welcoming wayward Republicans, saying that “we have a home for you right here.”  As is becoming the custom in Kaine speeches, there was a lot of Spanish thrown in, and while he is not the orator that Obama and Biden are, he did make a moving endorsement of his running mate when, citing his son Nat who has been deployed as a Marine in Europe, Kaine asserted, “On a personal level, as he’s serving our nation abroad, I trust Hillary Clinton with our son’s life.”  No higher endorsement than that.

Ex-New York City Mayor Michael Bloomberg, who has been at various times a Republican, a Democrat and is currently an independent took the stage to heartily endorse Clinton.  Though other speakers may have been more polished, Bloomberg’s endorsement had the power to really sting Trump, as, by conservative estimates, his wealth is approximately 10 times more than Trump’s, a fact to which Bloomberg vaguely alluded — “Truth be told, the richest thing about Donald Trump is his hypocrisy.”  Though Trump likes to be portrayed as a tough New Yorker, Bloomberg is the real deal, as he hit Trump the businessman hard — “Trump says he wants to run the nation like he’s run his business. God help us.  I’m a New Yorker, and New Yorkers know a con when we see one.”  If Trump was watching at home, he was probably seething.

But the big draw of the night was President Obama, and he did not disappoint, delivering one of his finest political speeches as President, though it was as much about his own achievements in office as it was about Clinton.  But his achievements were considerable and many of them were aided by Clinton.  When he did turn to Clinton, his endorsement was sincere and full-throated:  “There has never been a man or a woman, not me, not Bill, nobody more qualified than Hillary Clinton to serve as President of the United States of America.”  Rather than being offended, Bill Clinton leapt to his feet, applauding and laughing in appreciation.  It was a wonderful moment.

Obama’s harshest attacks were of course against Trump — “He’s selling the American people short.  We are not a fragile or frightful people. Our power doesn’t come from some self-declared savior promising that he alone can restore order.” — but he knows that his legacy is at stake and that Clinton is the only candidate who can help preserve it.  When the nominee herself made a surprise appearance onstage at the conclusion of the Obama speech, the body language between the two seemed warmer and more real than any time that I have recently seen them, and if they campaign on the trail together, they could be an amazingly potent team.

With his dark acceptance speech portraying America as a dystopian wasteland (just this side of “Mad Max: Fury Road”) that only he can fix, Trump has given the Democrats an enormous gift, allowing them to project an image of positivity, an image that was reflected in every speech on Wednesday night.  It remains to be seen if America was listening.

Democratic Convention: Day 2 — After the Boo-Birds Flew Away, the Evening Belonged to Bill Clinton

Democratic Convention: Day 4 — Clinton Does the Job, Now On to the Election