Denzel Will Earn Your Applause, and Viola Will Break Your Heart in August Wilson’s “Fences” 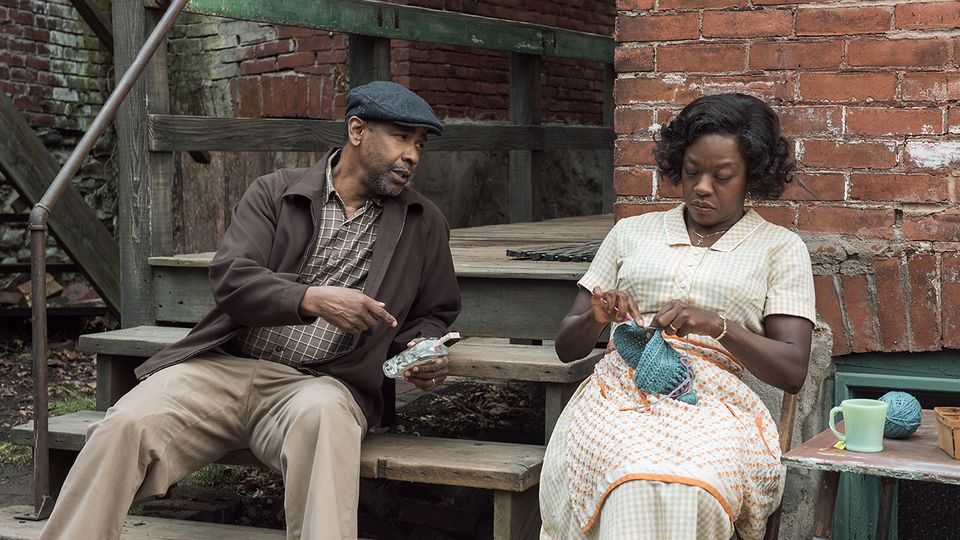 Denzel Washington faced a very big decision when he agreed to direct the film version of August Wilson’s Pulitzer Prize-winning play, “Fences.”  He could either “open up” the play to reset scenes in more cinematic locations, or he could film the play as is.  Washington chose the second option, and despite a certain lack of visual pizzazz (except, of course on the expressive faces of his marvelous cast), Washington has captured the brilliance of Wilson’s play on film for the ages.  And thank God he did.

If you’re not yet familiar with the writings of August Wilson, “Fences” is a great place to start.  Set in Pittsburgh sometime in the 1950s, the play focuses on the Maxson family who live in a modest home but who seem to spend much of their time in the family’s backyard where the patriarch Troy (Washington), a local garbageman, is busy building a fence.

Troy Maxson is one of the great characters of recent contemporary drama, a larger-than-life personality whose gregariousness hides a very dark side.  Troy is very much in love with Rose (Viola Davis), his wife of 18 years, but that doesn’t stop him from having a roving eye for the ladies.  He takes care of his brother Gabriel (Mykelti Williamson), who suffered brain damage during the war, but is willing to usurp money from Gabriel’s injury and use it to buy a house for himself.  And, most disturbingly, Troy, who, still resentful that he was not able to parlay his success in baseball’s Negro Leagues into a career in the Majors, stands in the way of his youngest son Cory (Jovan Adepo) from accepting a college football scholarship on the pretext that a white coach would never play Cory anyway.  As you can recognize, he’s a very complicated character, and, as Troy, Washington makes every contradiction believable.

Not that the rest of the family are saints — Troy’s eldest son Lyons (Russell Hornsby), a jazz musician who no longer lives in the family home, still manages to come by every Friday on Troy’s payday to get a weekly loan from his resentful father.  But at least Friday also brings an after-work drink in the backyard with Troy’s co-worker and best friend Bono (August Wilson veteran Stephen McKinley Henderson).  If you know anything about plays, you’ll know that when a bottle of gin appears onstage, secrets will be spilled and truths revealed.

And make no mistake about it, “Fences” on film is still very much a play.  People in real life just don’t take a swig from a gin bottle and wax as poetically as these people do.  But when that poetry is so magnificently expressed and so beautifully performed, you’re tempted to just shut your eyes and let all that dialogue wash over you.

It’s little wonder that there’s such chemistry present with this cast — most appeared in the acclaimed 2010 Broadway revival of “Fences,” a production that not only the Tony winner for Best Revival but also brought Tony Awards to Washington and Davis for their performances.  Henderson, Hornsby and Williamson return for the film and are at the top of their game, and newcomer Adepo (in his film debut!) goes toe-to-toe with Washington and walks away with his head held high.

Troy is a hugely demanding role — as Troy loves the sound of his own voice, the amount of dialogue that Washington must handle is staggering — but this actor knows the rhythms and voice of this playwright so well that he always leaves you wanting more.  As well as Washington can play heroes (such as in the recent “The Magnificent Seven”), he becomes a much more interesting actor when he takes on morally ambiguous characters and few characters are as challenging to play as Troy, whose complexity has sparked one of Washington’s very best performances.

But when you walk away from “Fences,” you will do so still thinking of Viola Davis’ Rose.  Rose lacks the moral ambiguities that torment Troy, and (remember, it’s the 1950s), there is a certain manner of speech and support that housewives are expected to maintain.  But when she suddenly doesn’t maintain that facade and emotionally asks the question “What about my life?,” you will feel every ounce of her emotion.  And whether or not the film around her feels like a play, “Fences” proves that great acting like that cannot be denied.

As the Worst Movie of 2016, Please Consider the Absolutely Preposterous “Collateral Beauty”