Gay? Ick! The Dreadful “CHIPS” Marks The Unwelcome Return of Gay Panic Jokes To the Screen 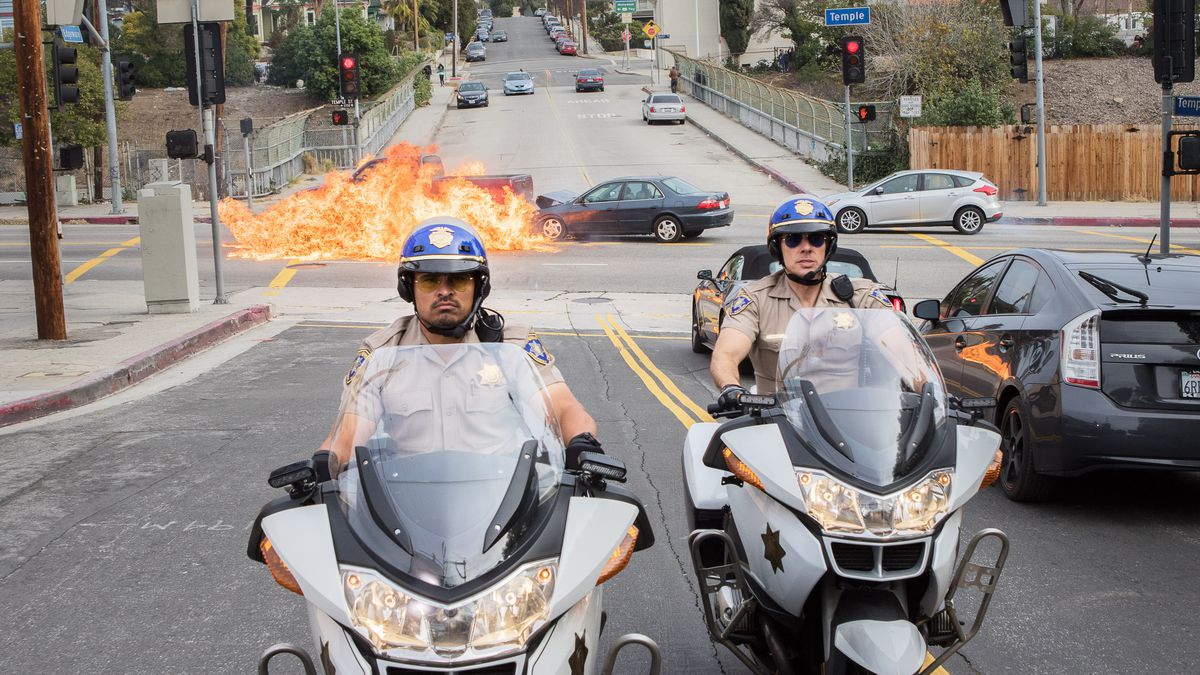 I can hear you now.  “Why, for God’s sake, are you wasting time reviewing something like ‘CHIPS’?  It’s supposed to be terrible.”

Is it really that terrible?  Absolutely.  In fact, it’s terrible in so many different ways that it’s perversely fascinating.  And one of the many many reasons why “CHIPS” is just awful is because it reintroduces an unfortunate topic to film that may be alarming but is worth discussing.  But we’ll get to that in a second.

In case you may not remember, “CHiPS” (note the lower-case “i”) was an NBC TV series that aired from 1977-1983 focusing on two California Highway Patrol motorcycle cops patrolling the freeways of Los Angeles Country.  The pair, straight-arrow Jon Baker (Larry Wilcox) and macho man Frank “Ponch” Poncherello (Erik Estrada), would solve crimes (sometimes several in an episode) though usually using non-violent methods.  It was an action show for viewers who didn’t like action, which made it a valuable utility player for NBC, as it could play in early evening time slots.

While the backstory of Jon and Ponch was minimal on the TV series, Dax Shepard, who also produced and directed this film version, has given each of the cops an extensive history — Jon (Shepard) is a former motorcycle-riding champion who, in an effort to save his marriage to his shrewish wife Karen (Shepard’s real-life wife Kristen Bell, in what is arguably her worst screen performance ever), hopes to earn her respect by joining the Highway Patrol.  For his part, Ponch (Michael Peña) is an undercover FBI agent assigned to infiltrate the department to flush out a cabal of crooked cops.

Shepard’s film adaptation of the TV series is, however, is anything but family-friendly with lots of bare boobies, F-bombs, explicit violence and dick jokes (none of them even remotely funny).  Unlike what should have been Shepard’s model, the first two “21 Jump Street” films which balanced wit and sentiment, he goes full “bro”-movie here, with lots of degradation of women on full display.  (What they do to the wonderful Jane Kaczmarek is downright criminal.)

But the issue for which “CHIPS” will likely be remembered is its reliance on gay panic jokes, an ugly form of humor that, with a few exceptions, has blessedly disappeared from theater screens over the last decade.  There have been a few — 2006’s “Let’s Go To Prison,” a don’t-drop-the-soap “comedy” starring (surprise!) Dax Shepard (this guy obviously has issues) and 2015’s “Get Hard” with Will Ferrell as a white-collar criminal anxious to get lessons from Kevin Hart (whom Will assumes is an ex-con because he’s black) as to how to keep from getting raped in a men’s prison, an especially offensive “don’t-drop-the-soap” dud.

In “CHIPS,” however, the gay freak-out scenes are largely given to Ponch, who loudly asserts his heterosexuality, even as he is repulsed at Jon giving him a welcome hug while wearing his tighty-whitey underwear.  The words “Gay? Ick!  I’m straight!” doesn’t even need to be spoken to communicate the film’s message.  (To be fair, there are 3 gay characters in the film, one of whom is regularly injured, while the other dies a grisly death.  So there’s that.)

What is intended to be the film’s comic pièce de résistance is a scene where Jon, who is injured and unable to move, asks Ponch to carry him over to his bathtub.  Seeing that Jon is naked, Ponch initially refuses but reluctantly agrees.  But when Ponch trips, his face lands in Jon’s crotch, producing more “ick” moments.  I tell you, the laughs just abound.

“CHIPS” is not without any redeeming features.  The many scenes of the cops riding their choppers around picturesque Los Angeles prove to be a welcome respite from the rest of the film, and Peña, the co-star of 2016’s Worst Picture, “Collateral Beauty,” is once again the best thing in an absolutely terrible movie.

What worries me most about the scenes of gay panic passing as comedy in “CHIPS” is not that it’s dated.  It’s that, in this political environment, it’s may be a harbinger of things to come.