“The Great Comet of 1812” and “Hello, Dolly!” Lead A Wildly Diverse Set of Tony Award Nominations 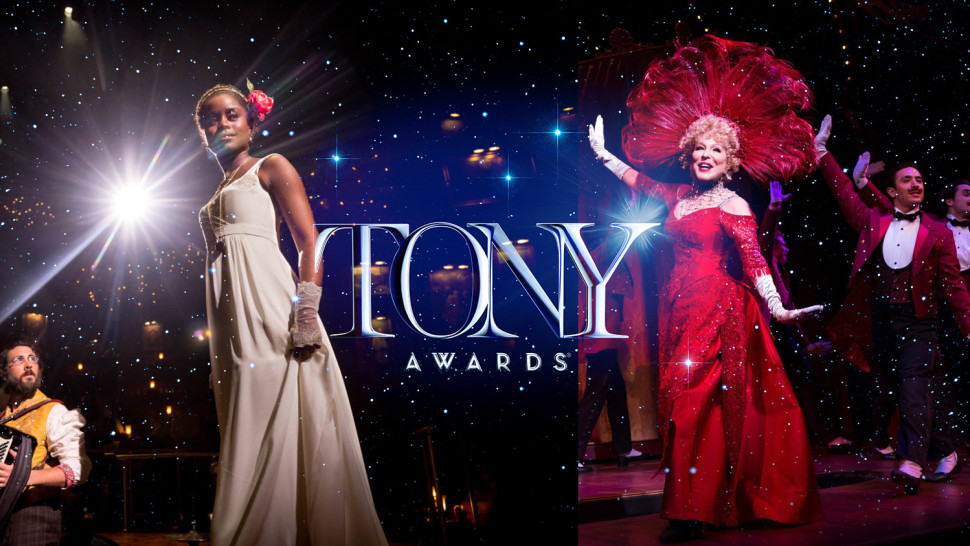 What a difference a year makes.

Though the 2017 Broadway season lacked the kind of once-in-a-generation phenomenon that “Hamilton” became, what it lacked in hoopla, it made up for in diversity, not just in casting but also in subject matter.

That was clearly reflected in the nominations for the 2017 Tony Awards, which were announced on Tuesday morning in New York.

Yes, there’s your usual film-to-stage musical adaptation among the nominees for Best Musical (this season it’s “Groundhog Day” based on the Bill Murray movie), but the other three musical nominees tackle subjects that hardly seem to be likely fodder for a musical adaptation.

Strictly in terms of number of nominations, the morning’s big winner was “Natasha, Pierre & The Great Comet of 1812,” starring nominees Josh Groban and Denée Benton (pictured above, left), which garnered 12 nods, leading all shows.  This musical adaptation of Tolstoy’s “War and Peace” is given an immersive staging with audience members finding themselves right in the midst of the action.

“Dear Evan Hansen,” which earned 9 nominations, tackles the subject of teen suicide focusing on a high-school senior deeply affected by a classmate’s death.  The musical’s star, Ben Platt, is the favorite in the hotly-contested Best Actor race, and the show’s original cast album recently debuted in the Top 10 on the Billboard album chart.  This, I think, is the show to beat.

“Come From Away,” which is routinely called “the 9/11 musical,” is set on that day in a small town in Newfoundland which suddenly found itself hosting passengers from 38 planes that were forced to land there.  The musical, which received 7 nominations, has become a word-of-mouth hit on Broadway and is currently playing to standing-room-only crowds.

In the race for Best Revival of a Musical, all you need to know is “Hello, Dolly!” and Bette Midler (pictured above, right).  Game, set, match.  “Falsettos” and “Miss Saigon” will have to settle for participation medals.

On the Best Play side, the subjects taken up by the four nominated plays are as wildly diverse as their musical counterparts.

Lucas Hnath’s “A Doll’s House, Part 2,” which received 8 nominations, picks up 15 years after Nora (nominee Laurie Metcalf) slammed that door in Ibsen’s original play and here decides to open it again, pondering her life after she left her husband (nominee Chris Cooper) and her family.

Paula Vogel’s “Indecent” recreates the furor that surrounded the 1921 production of a play called “God of Vengeance” which prompted anti-Semitic and homophobic reactions, resulting in the arrest of the entire cast on grounds of obscenity.  For Vogel, one of America’s most highly-regarded playwrights, “Indecent” marks her first play to be produced on Broadway.

J.T. Rogers’ sprawling drama “Oslo,” nominated for 7 Tonys, follows the efforts of two Norwegian diplomats to negotiate what was to become known as the 1993 Oslo Peace Accords between Israeli Prime Minister Yitzhak Rabin and PLO Chairman Yasser Arafat.  With its dramatization of a big political subject brought to life by a comparatively large cast, “Oslo” offers a stark alternative to its Best Play competitors.

This year’s Pulitzer Prize Winner for Drama, Lynn Nottage’s “Sweat” is set in a blue-collar bar in industrial Pennsylvania as its patrons air their views about such topics as outsourcing of jobs to Mexico and their town’s changing racial demographic.  “Sweat” is this year’s “ripped-from-today’s headlines” nominee, a description that has led similar plays to a Tony victory in years past.

As for the very competitive Best Revival of a Play race, “Jitney,” the only play in August Wilson’s 10-play Pittsburgh Cycle never to receive a Broadway production, finally arrived this season and grabbed 6 Tony nominations.  The current production of Lillian Hellman’s “The Little Foxes” boasts two great actresses (nominees Laura Linney and Cynthia Nixon) who swap the two leading roles night after night.  The revival of Noël Coward’s “Present Laughter” brings a welcome element of farce to the revival race, with Kevin Kline at his smoking-jacketed best.  And the most recent play of the revivals, John Guare’s “Six Degrees of Separation” again reminds us of how connected each of us are to even the unlikeliest of other people.  The play revival category looks to be one of the evening’s hottest toss-ups.

The Tony Awards will be on Sunday, June 11 on CBS, hosted by Tony Award winner Kevin Spacey.  (You can probably bet that we’ll be treated to his superb Christopher Walken sometime during the evening.)  So be there or be square!

With that, here are the nominees for the 71st Annual Tony Awards:

“The Lost City of Z” — A Brave Explorer Sails Into the Depths of the Amazon Jungle. But Why?

Why Do Dictators Seem To Give Donald Trump a Chubby?