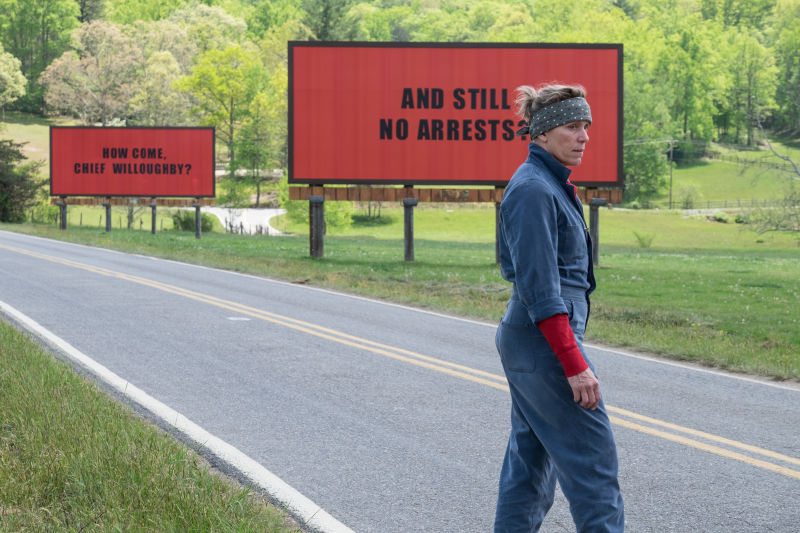 Mildred Hayes (Frances McDormand) is trying to mediate an argument between her daughter Angela (Kathryn Newton) and son Robbie (Lucas Hedges), as Angela wants to borrow the family car.  Mildred offers her cab fare instead, but Angela says that she’d rather walk and is so angry that she says she hopes that she gets raped.  Mildred says that she hopes that Angela gets raped, too.  While walking, Angela not only is raped, but she is set on fire as well.

Some way to start a comedy.

And make no mistake about it, “Three Billboards” is a very very very black comedy, whose laughs are essential in making the film’s subject matter go down more easily.

Seven months after the incident, the local police still have not even come up with a suspect, so Mildred, frustrated at their inaction, decides to rent the three billboards under which her daughter was incinerated to goad the police into reigniting the investigation.

AND STILL NO ARRESTS?

Their appearance certainly captures the interest of the town, particularly Chief William Willoughby (Woody Harrelson), who points out that the billboards singling him out aren’t very fair.  He reveals that he has terminal pancreatic cancer, so he asks Mildred why would she put that billboard up in his last days?  Then she delivers the zinger: “They wouldn’t be as effective after you croak, right?”  As you can see, the humor in “Three Billboards” is pretty rough.

So here’s what we think we have — a noble heroine (McDormand) who is fighting to find her daughter’s killer, an aloof police chief (Harrelson) who has no interest in solving Angela’s murder, and racist deputy Jason Dixon (Sam Rockwell), who is accused of torturing a black suspect while in custody and has no stake in this case except to gum it up.  Easy, right?

Except you couldn’t be more wrong.

Though McDonagh is primarily known as a playwright for such stage work as “The Pillowman,” “The Lieutenant of Inishmore,” “A Behanding in Spokane” (which starred Rockwell and Christopher Walken, which I saw onstage — now that was a trip), and “The Beauty Queen of Leenane.”  His work has been nominated for four Tony Awards, three Golden Globes (including a Best Actor win for Colin Farrell for in “In Bruges”) and two Oscar nominations with one win for his short subject “Six Shooter.”

Now McDonagh finds himself in the midst of a hot and heavy Oscar race, largely thanks to the extraordinary performances that he has elicited from his cast and even more importantly from his own script, which takes all the character expectations that I have listed above, and turns them all upside their heads.

Let’s just say it outright — “Three Billboards Outside Ebbing, Missouri” is absolutely brilliant, one of the year’s best films, if not the best film so far.

Much as I have cited McDormand’s work in “Fargo” as one of the best performances in the past two decades, she is even better here.  Dressed in work clothes while wearing a bandanna, Mildred is ready to go to war, and go to war she does.  She rents the billboards for one year from Red Welby (Caleb Landry Jones, most famous for playing Allison’s Williams’ screwy brother in “Get Out”) and waits for the fallout.  The local priest tries to argue that the community doesn’t like the billboards, an idea that she swats away, and then her local dentist attempts to change her mind while wielding a whirring drill, which Mildred promptly plants in his thumbnail.

For his part, Chief Willoughby is a good and decent man, as well as a dedicated cop who has done everything right– he has collected all DNA samples and cross-referenced those people who were in town at the time of the rape.  All the proper police work has been done, and he has come up dry, so that, short of a miraculous stranger wandering into a bar proclaiming that he is the killer, not much more can be done.

Sam Rockwell’s Dixon is another matter entirely.  After a series of brutal acts, he suffers a painful experience of his own which is better left unsaid only to say that it produces a change of heart that makes two former antagonists into allies in a righteous quest.

If you’ve ever seen the rollicking red-band trailer for “Three Billboards” online, you’d think this film was simply a laugh riot.  And I have to admit that it is indeed very very funny at times.  But the hilarity there largely misses the heartbreak of the real lives damaged through the events in the entire film.  As a playwright, McDonagh has a obligation to entertain an audience, but he also has a responsibility to take his characters as far as he can emotionally, and in “Three Billboards Outside Ebbing, Missouri,” he has done just that.  And, as audience members, we are much the better for it.

Now That Michael Flynn Has Flipped Against Trump, Who’s the Next to Squeal?