“Angels in America” Returns to Broadway, As Powerful As Ever 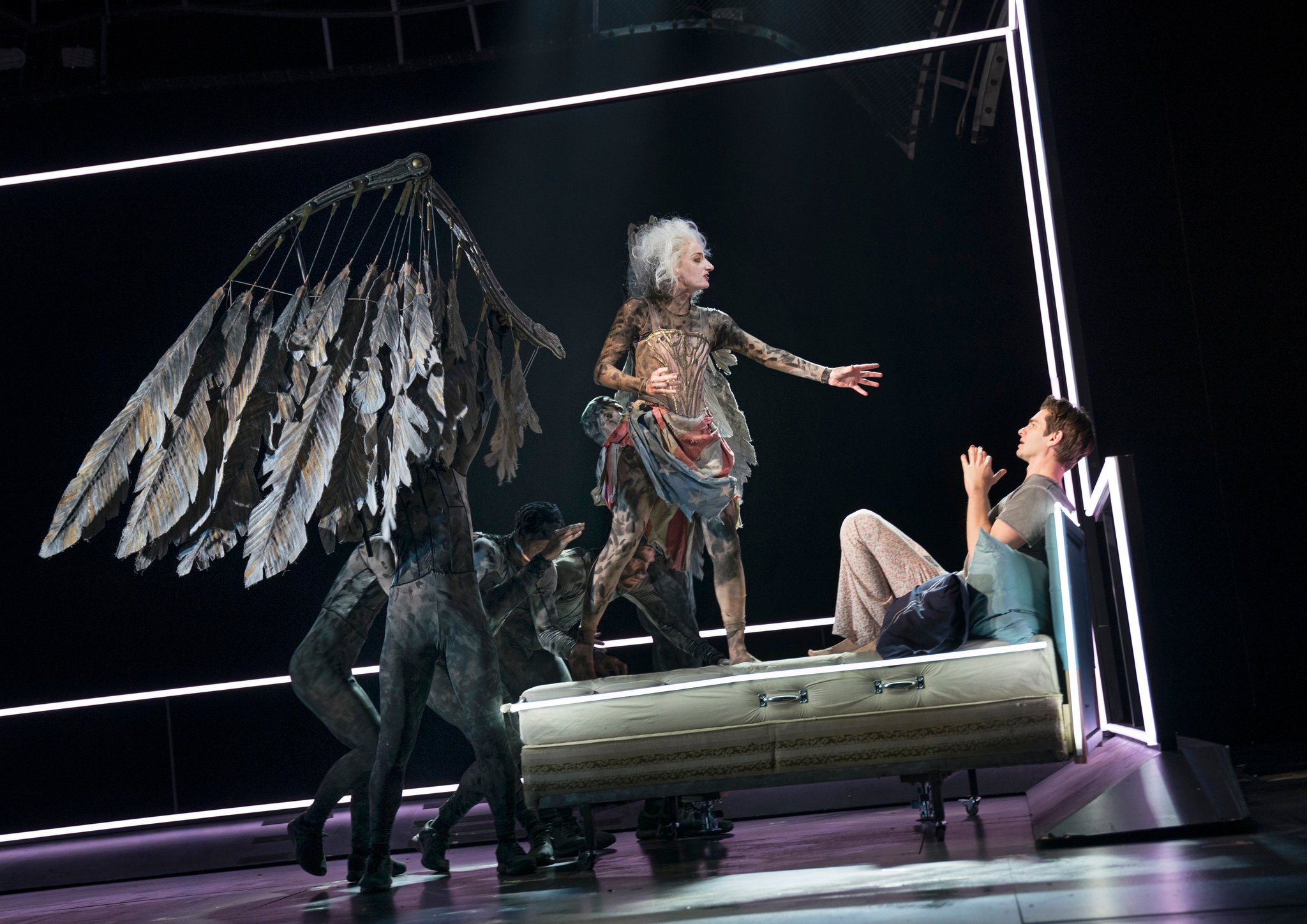 If you weren’t around in 1993, it’s hard to describe the thunderclap that occurred when Tony Kushner’s two-part play, “Angels in America: A Gay Fantasia on National Themes,” opened.  Kushner’s overview of the era of the AIDS epidemic during the Reagan Administration was devastating in its impact, and its subject (and length) forever changed the standard of what kind of material could be mounted on the Broadway stage.

For those who have only heard of “Angels in America” but haven’t seen it, the entire work consists of two plays — Part 1, “Millennium Approaches,” won the 1993 Tony Award for Best Play and the Pulitzer Prize for Drama, and Part 2, “Perestroika,” which opened after Part 1, won the 1994 Tony for Best Play as well, an unparalleled achievement.  “Angels in America” was also adapted into a 6-part Emmy-winning miniseries for HBO, directed by Mike Nichols and starring Al Pacino and Meryl Streep.

I cite the history of this play only to set the stage for the high expectations that met the first Broadway revival of both parts of “Angels in America,” which opened on Sunday night at the Neil Simon Theater.  This revival not only meets but exceeds that very high bar.  I have to say at the outset, however, that I am not reviewing the staging on Broadway.  From all reports, except for one cast change, this is merely a transfer of last summer’s production direct from London’s National Theatre, which I did see via “NT Live,” National Theatre’s program of beaming its productions to movie theaters all around the world.

“Angels in America” is not an easy play to stage.  There is a major effects sequence at the end of Part 1 that needs to be made convincing, as well as challenging tonal shifts — from hilarious one-liners to the darkest of tragedies in just a few moments.  But in the capable hands of the imaginative director Marianne Elliott (“War Horse,” “The Curious Incident of the Dog in the Night-Time”), this production soars.

It’s 1985 in New York, and the AIDS epidemic is ravaging its way through the city’s gay population.  We focus on one couple — Prior Walter (Oscar nominee Andrew Garfield), who learns that he has contracted the disease and his lover Louis Ironson (James McArdle), a preachy law clerk who is terrified by Prior’s diagnosis and abandons him.  Now alone, Prior is visited by the ghosts of his ancestors and is told to prepare for the coming of an angel.

Louis, meanwhile, works in the same law office as closeted Mormon Joe Pitt (Lee Pace, new to the cast) who is offered a job in Washington D.C. working for Roy Cohn (Nathan Lane) — yes, that Roy Cohn — who has contracted AIDS himself and will do anything to conceal his affliction from the world.  But Joe is hesitant to accept the position due to the agoraphobia of his wife Harper (a sensational Denise Hough), who gets through her day on drugs.

Then there’s the angel (Amanda Lawrence), Cohn’s drag queen nurse (Nathan Stewart-Jarrett), as well as the ghost of Ethel Rosenberg and Joe’s determined Mormon mother (both played memorably by Susan Brown).  All of these distinctive characters have come from the fertile mind of playwright Tony Kushner who, with “Angels,” has created one of the truly great pieces of drama in the past two decades, a piece that has already stood the test of time.

Elliott makes the most of the many colors that Kushner’s text provides her, with an intimate feel to even the most spectacular scenes.  But Elliott’s most notable skill is her work with actors, and this ensemble is remarkable across the board.  Two, however, truly stand out.

Andrew Garfield.  Spiderman as Prior Walter?  Really?  I was skeptical, and I was wrong.  Garfield embraces all the fears, sass and strength that make up the character, and he is not afraid to swish.  (It’s not the kind of swish that intolerant straights use to mock gay people but instead the swish that we display among ourselves to let our hair down, and Garfield gets that.)  It’s a beautifully modulated performance.

Nathan Lane.  Arguably the most versatile stage performer of his generation, Lane reveals even more layers of his talents as Roy Cohn, who will appear to be warm and supporting one minute, then slice you the next.  The fact that Donald Trump was Cohn’s protege while he was still alive adds another dimension to the character that Kushner could not have foreseen, but Lane runs with it, determined to remain the alpha male even as the life is draining away from his body.

If I have to gripe about anything, the set design by Ian MacNeil seems cheap.  I can understand the idea of having several settings onstage to remind us that there are many stories being told at the same time, but what’s there looks chintzy.  (Note to self:  “Really, O’Brien?  You’re watching ‘Angels in America,’ and you’re bitching about the sets?  Focus, man!”)

This an important revival, well worth seeing even if you have experienced the 7 1/2 hour journey before, and I would not be surprised if you saw moments in this “Angels in America” that you may have not noticed before.  I know I did.  And if you’re seeing it for the first time, buckle up.

“Annihilation” — The Best Film Out There That You’re Not Seeing