“Ocean’s 8” Is Entertaining Enough, But Does It Play It Too Safe? 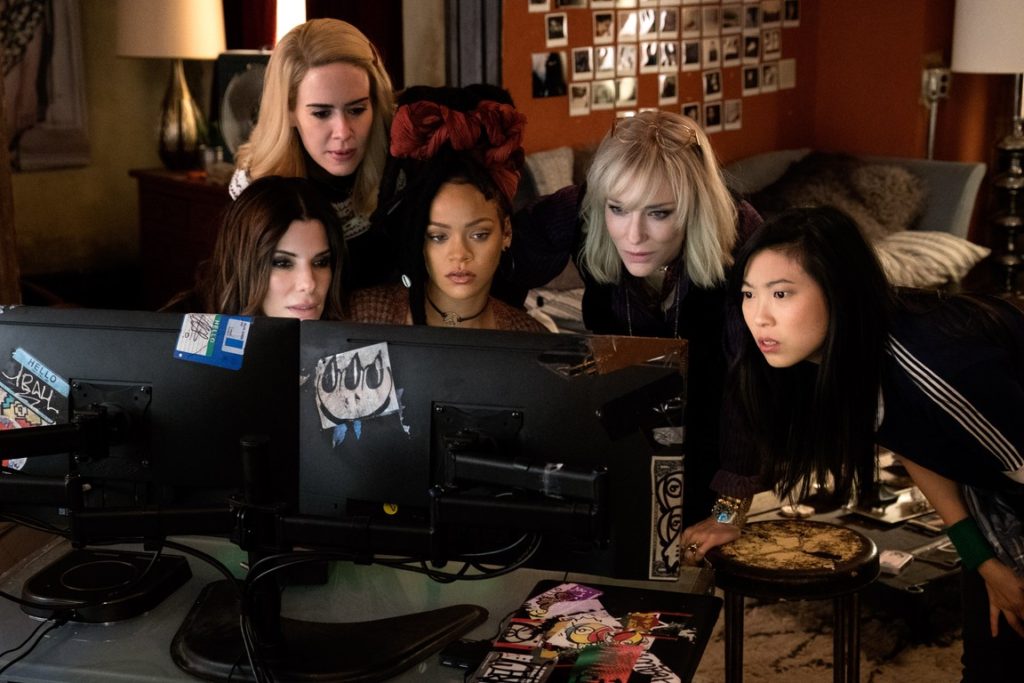 When “Ocean’s 13” completed the Ocean’s trilogy of heist movies in 2007, it seemed like the series had gone as far as it could go without becoming completely repetitious.  So when I heard that a reboot was being planned featuring an all-female cast, I was intrigued with the idea but worried that all it would be was a gender swap of a tiring formula.

Instead, it has taken a different path and relies instead on an entirely new idea, not always to its benefit.

George Clooney’s Danny Ocean is now out of the picture, and we focus instead on his estranged sister Debbie (Sandra Bullock) whom we meet as she bluffs her way out of prison with the parole board.  But it remains abundantly clear that larceny is a part of the Ocean family bloodline, because Debbie is no sooner sprung when she puts her latest heist plan into motion.

Debbie’s target is not a casino or some such target as in the Clooney films but is instead the Met Gala, the ultra-glamorous benefit held at New York’s Metropolitan Museum of Art.  Her plan is not to rob the museum itself but to snatch a diamond necklace, worth $150 million which she plots will be around the neck of self-centered movie star Daphne Kluger (Anne Hathaway).

A quick word about Anne Hathaway.  Since her successful campaign to get an Oscar for “Les Miserables,” Hathaway has taken a lot of crap on social media for what some people perceive as a phony or entitled attitude.  Well, obviously Hathaway has a sense of humor because the attitude that these folks think she is projecting, Hathaway channels that perception into her character of Daphne, who is as self-centered as Hathaway has been accused of being.  She is an absolute hoot here and by far the best thing about “Ocean’s 8.”

The big difference between the men’s version of “Ocean’s” and “Ocean’s 8” is the lack of a big threatening bad guy.  In the men’s “Ocean’s” trilogy, there is usually one intimidating nemesis that they have to take down, be it a character played by Andy Garcia or Al Pacino.  Here the big question is “Can they pull this off?” which is fine, but it doesn’t have the same satisfaction as bringing a bad guy to justice.  Yes, there’s Debbie’s ex-boyfriend (Richard Armitage), or the guards from Cartier trying to protect the necklace who can be seen as nemeses, but there’s no one of the same stature here as the women, and that creates a diminished level of tension that prevailed in the previous “Ocean’s” movies.

No problem with the cast at all, although I wish they had used a little more Rihanna, who is turning into a really interesting actress.  The only problem that I have with “Ocean’s 8” is with the direction of Gary Ross.  He’s an OK director with films such as 1998’s “Pleasantville,” 2003’s Oscar bait “Seabiscuit,” the first “Hunger Games” and the odd Matthew McConaughey vehicle, 2016’s “Free State of Jones.”  Not to be unkind, but Ross is a journeyman director, not an artist.  And this franchise, at this point needs an artist of the stature of previous director Steven Soderburgh.

“Ocean’s 8” provides a diverting couple of hours, but with so many more interesting choices at your local cineplex, I might suggest that you look elsewhere.

It’s Been 14 Years Since the First Film, But “Incredibles 2” Was Worth the Wait