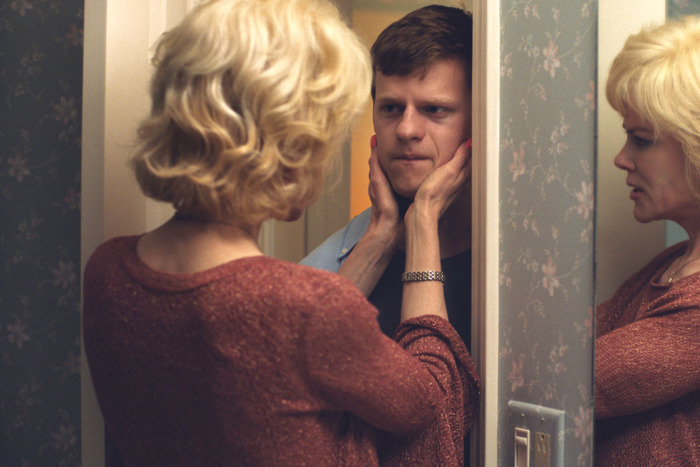 2018 has proven to be the autumn of the troubled teen.

We’ve had a parade of some of Hollywood’s hottest young actors emoting their best by snorting, smoking, shooting up or just being too darn gay.

There’s, of course, the drug-addicted teens.  A few weeks ago, we had Timothée Chalamet getting hooked on crystal meth in “Beautiful Boy,” and next week, we’ll see Lucas Hedges as an opioid addict in “Ben is Back.”

Then there are the gay ones.  Chloe Grace Moretz was terrific in the too-little seen “The Miseducation of Cameron Post,” which chronicled the dilemma of the title character (Moretz) who is forced by her parents into a reeducation camp designed to “reverse the gay” in her.  Cameron has no interest in changing and no interest in returning to her family, choosing instead to create a new family from among the gay kids around her.

In Joel Edgerton’s very fine “Boy Erased,” however, Jared Eamons (Hedges again) is also looking for a family, specifically his own biological family, which has forced him to undergo gay conversion therapy after he was outed by a college classmate (Joe Alwyn) who tried to sexually assault him.

Jared’s parents obviously love their son, but still their priority appears to be maintaining their reputation as the moral pillars of their small Arkansas community — his dad Marshall (Russell Crowe) is the town’s Baptist minister (and owner of the largest Ford dealership in town), and his mom Nancy (Nicole Kidman), who resembles Pat Nixon (without the booze), is the perfect embodiment of the devoted Southern wife.

Jared does not mention the assault to them but, to his credit, he does tell his parents that he does have feelings for men.  Confused, Marshall consults the Baptist elders in his town, who advise him to send Jared away to the Love In Action gay conversion therapy camp, where gay individuals can allegedly become heterosexual.

Operated by its charismatic chief therapist Victor Sykes (Edgerton), the camp’s approach focuses on blame, and on his first day there, Jared becomes immediately uncomfortable when asked to draw a family tree and assign a moral fault (alcoholism, gambling, sex addiction, etc.) to each one of his relatives, implying that the bad choice he made by being gay is equivalent to the bad choices that his family members made.

In case you were wondering whether these blame games are really true, “Boy Erased” is based on the memoir by Garrard Conley (the real-life Jared) who actually went through this entire experience.

Truth be told, I’m particularly drawn to process films — movies that show me how something is done about which I never really knew.  For example, I had always thought that gay conversion camps involved physically beating the Jesus into its victims.

Turns out, its techniques are much more insidious than that.  According to Conley’s memoir, there’s a concerted effort to emotionally separate gay kids from their parents and to foster a dependence instead on the Love In Action staff, so that when Sykes pronounces that a camper has not been cured, that camper’s family is coerced to pay rent to stay ad infinitum.

At least Jared has some fellow campers with whom he can confide — Cameron (Britton Sear), an ex-football player whose family is told by Sykes to physically beat him with a Bible; Gary (out singer Troye Savan) who urges Jared to pretend to go along with the program so that he can be released early; and Jon (out Canadian director Xavier Dolan) who appears to have the whole scam figured out.

Hedges is spectacular here, just as he was in his Oscar-nominated performance in 2016’s “Manchester By the Sea” (Best Picture nominee) and last year’s “Lady Bird” (Best Picture nominee) and “Three Billboards Outside Ebbing, Missouri” (Best Picture nominee).  Hedges obviously knows how to pick his projects — he is currently starring on Broadway opposite comedy legend Elaine May (!!!) in “The Waverly Gallery.”  The sexual assault aside, his Jared doesn’t appear to think that there’s anything wrong with being gay but is going along with this camp in order to please his parents.  But he is approaching is breaking point soon.  Very soon.

In the film’s trailer, Crowe’s conflicted Marshall appeared to be a Bible-thumping cliché, but in the context of “Boy Erased,” his performance is much more nuanced.  Marshall is torn between the love of his son and the expectations of his congregation, whose admiration is very tied up with his own self-worth.  Despite his once-hunky image, Crowe has always seemed to have the soul of a character actor inside, and now he is of the age where he can fulfill that destiny, which he does ably here.

But it is Kidman’s performance that really snaps you to attention, particularly in the film’s final hour.  Many Oscar observers have compared her work here to her nominated performance in 2016’s “Lion,” but her Nancy here is so much more complex.  Nancy knows that sending her son away for recognizing his sexuality is wrong, but she has been too much of a supportive doormat to have raised any objection at the time.  No more.  She becomes Jared’s avenging angel, and Kidman shines with a fierceness that ranks Nancy among her very best performances.

Although I suspect that “Boy Erased” will largely appeal to an audience already aware that gay conversion therapy is wrong and ineffective, for any parent who is contemplating such a move for their gay child, Edgerton makes a very compelling case that, for the parent as well as the child, such a decision will not end well.

Melissa McCarthy is Magnificent in the Slyly Heartbreaking “Can You Ever Forgive Me?”