Melissa McCarthy is Magnificent in the Slyly Heartbreaking “Can You Ever Forgive Me?” 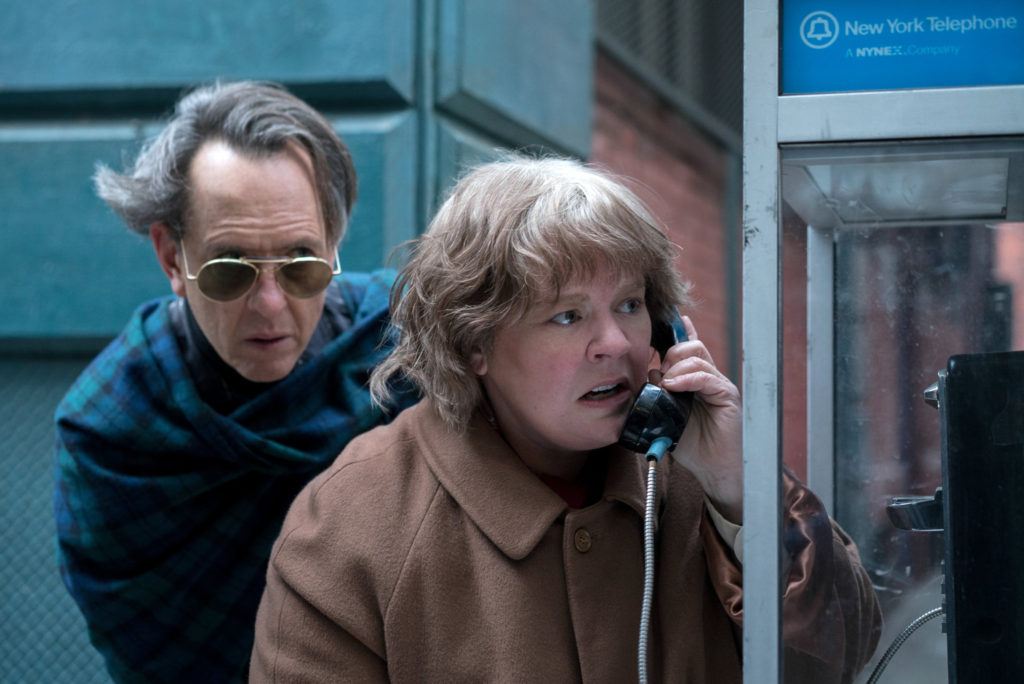 “Can You Ever Forgive Me?” is one of the funniest films about loneliness that I have seen in…maybe ever.

It’s the early 1990s in Manhattan.  The real-life writer Lee Israel (Melissa McCarthy), who was once flying high as the author of popular books profiling the lives of such long-ago celebrities as Tallulah Bankhead and Dorothy Kilgallen, has fallen on hard times.  The tastes of the book-buying public have changed by the ’90s, and, in order to pay her rent, Lee is forced to sell off her personal library collection to a bookstore that has put her most recent bio of Estée Lauder on the bargain table at 75% off.

After having broken up with her romantic partner Elaine (Anna Devere Smith), Lee now lives alone in her shabby Village apartment with her only friend, her cat Jersey.  Desperate, Lee begs her agent Marjorie (a welcome return of Jane Curtin) to get her an advance for her new book on Fanny Brice.  After Marjorie gently tells her that no one is interested in a book about Fanny Brice and suggests that Lee might be more successful if she was nicer to people.

Marjorie is right.  Lee can be a real pill.  She’s not just a curmudgeon (which in some people could be kind of lovable).  She’s also self-absorbed and a genuine misanthrope, resenting people whose careers seem to be rising while hers is crashing.  So Lee usually spends her late afternoons drinking alone at her neighborhood gay bar, Julius.

One day, who should walk through Julius’ door (a door I’ve walked through many times myself) but local Village dandy Jack Hock (Richard E. Grant), a man of dubious personal address who seems to rely on the kindness of strangers to get by.  He soon strikes up a friendship with Lee, who sees Jack as a kindred spirit, a friend of which she is in short supply.

While doing background for her Brice book, Lee sees something fall out of a library book, which turns out to be a personal letter from Fanny Brice.  Thinking it might be valuable, Lee pockets it and takes it to bookstore owner Anna (a wonderful Dolly Wells), who can only offer a low price because there’s nothing personal about the letter.  Leave it to Lee to add a personal addendum (which she composes in Brice’s writing style), and Anna flips over it, offering Lee a substantial price.

And thus a criminal career was born.

“Can You Ever Forgive Me?” has to walk a fine line between light and dark in order to work, and thanks to the perfect tone set by screenwriters Nicole Holofcener (“Enough Said”) and Jeff Whitty (“Avenue Q”).  When I began by saying that this was the funniest film about loneliness, I didn’t mean that “Can You Ever Forgive Me?” is an out-and-out comedy.  It’s extremely dramatic but is filled with a dry wit so appropriate to a film centered around writers.

Director Marielle Heller does a remarkable job evoking the Greenwich Village of the 1990s (not easy to replicate given how much it has changed in the years).  Her love for the disappearing bookshops (whose business has now largely been gobbled up by Amazon) and the neighborhood gay bars such as Julius, which is thankfully still going strong.  I lived in NYC through the late 1980s, and I’ll tell you, Heller really nails the special vibe that the neighborhood had.

Heller does even better with her supporting cast, which includes not only great work by Curtin, Smith and Wells but also Stephen Spinella as a skeptical bookbuyer and McCarthy’s husband Ben Falcone as a blackmailing one.

Yet “Can You Ever Forgive Me?” is basically a two-hander for Grant and McCarthy.  Since his brilliant debut in 1987’s “Withnail and I,” Grant has become one of those great character actors whose face is known by millions and his name by far fewer. That will change with “Can You Ever Forgive Me?”  His Jack, as deeply lonely as Lee, tries to compensate with foppish flamboyance in order to deflect the emptiness he feels inside, even as he is surrounded by happy, fulfilled gay people.  Grant is both hilarious and heartbreaking at the same time.

But clearly the revelation here is Melissa McCarthy.  Not that she isn’t a terrific actress — her Oscar-nominated performance in “Bridesmaids” alone and her fearless hosting gigs on “SNL” should dissolve that notion.  What’s revelatory is the depth of emotion she is allowed to display as Lee.  Depressed at the idea of her career slipping away, Lee displays an arrogance that she can no longer get away with, retreating instead to her many glasses of scotch.

There’s always been a modicum of anger bubbling under McCarthy’s comedy (think of “Bridesmaids” or her volcanic Sean Spicer on “SNL”), but she channels that same energy here for dramatic purposes and is unafraid to show us the very unpleasant side of a very complicated character.

Yet what I didn’t entirely expect was how McCarthy manifests Lee’s desperation, willing to do anything that could return her life to the way it was, one that gave her at least a little modicum of happiness.  McCarthy never winks at the audience as if to say “I’m only acting.”  Without concern about her vanity, she commits to showing us a woman at the end of her rope looking for an answer — any answer — that can give some direction to her life.

The fact that the answer is also happens to be illegal is of little concern to Lee, because it is that very illegal activity that allows her the chance to become the literary artist that she has always dreamed of being.

“Can You Ever Forgive Me?” chronicles Lee’s remarkable journey to get to that point with a combination of grace and compassion, with a powerhouse performance leading the way.