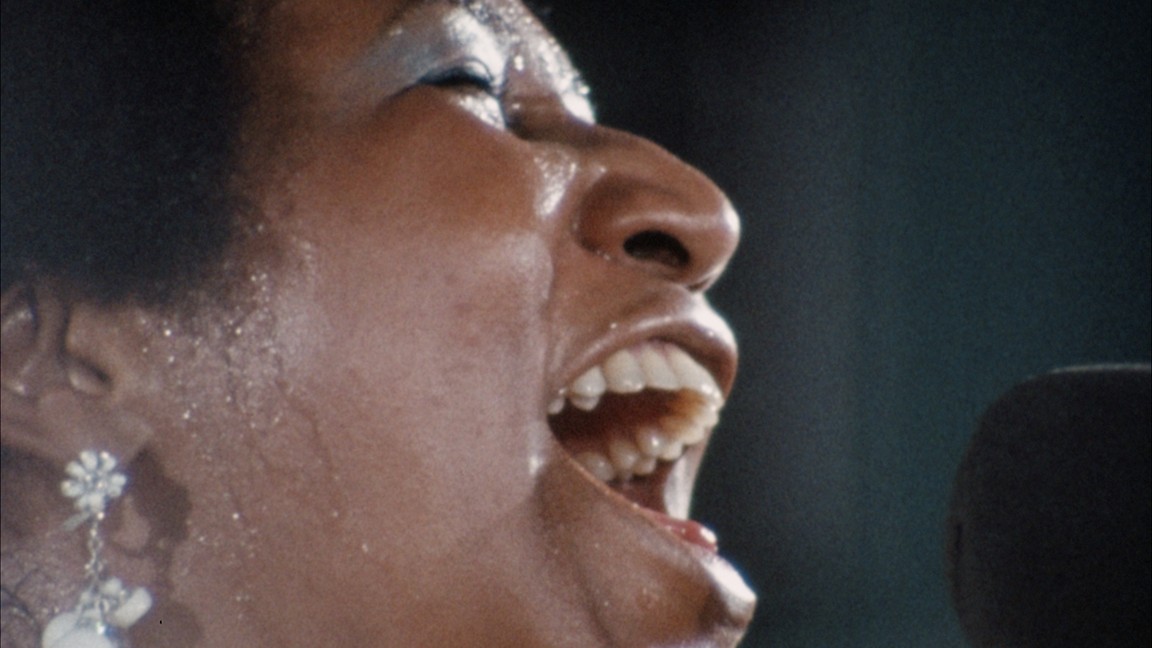 ​It took 47 years to reach theaters, but the documentary “Amazing Grace” is sheer musical bliss. Originally shot in 1972 at a two-night recording session held at the New Temple Missionary Baptist Church in Watts, the film captures the glory of 29-year-old Aretha Franklin in her heyday. That unmistakable voice simply soars over this collection of spiritual songs that resulted in Franklin’s best-selling album ever, the biggest selling live gospel record in history and an album that many music critics regard as the pinnacle of her musical career.

With a musical artist of Franklin’s caliber and an Oscar-nominated director (Sydney Pollack) at the helm, “Amazing Grace” had the promise of a smash music documentary. But because Pollack failed to slate the film as he shot it, the audio and video could never be properly synced.  In 2008, just before his death, Pollack asked producer Alan Elliott to give it another try.  Elliott mortgaged his house to buy back the rights from Warner Bros and managed to successfully match picture and film.

When he tried to show the completed film in 2011, however, Franklin sued and successfully shut down any screenings of “Amazing Grace” for reasons unknown.  It was only after her death in 2018 that Elliott showed the finished film to the Franklin family and received their blessing, so that the film was freed to be seen by the public, and “Amazing Grace” is finally ready for its moment in the sun.

So now that we can finally see this legendarily unavailable film, what kind of a doc is “Amazing Grace”? For one thing, it’s not a traditional or formal concert film as if it was set in a theater or concert hall with set camera positions. This is an active house of worship with parishioners inviting us in as witnesses to what turned out to be a historic music event.

Pollack’s camera crew treat the church with the respect it deserves, but that doesn’t stop them from prowling the aisles in search of magical moments from the awestruck parishioners. This is real “fly-by-the-seat-your-pants” filmmaking, and “Amazing Grace” at times feels a bit disjointed because of that approach. But it yields a number of remarkable shots of audience members being driven into a kind of frenzy by the intensity of Franklin’s singing. (There’s also an unexpected cameo by a rapt Mick Jagger who has slipped into a back pew.)

The focus of “Amazing Grace” is, as it should be, on the woman behind the piano in front of the pulpit giving it her all. At the time, it was widely reported in gospel music circles that when Aretha (who had previously been a gospel singer) signed with Atlantic Records and became and pop and soul star, she turned her back on the gospel world. Reportedly the idea for the album and film was to prove to her gospel colleagues that she had not. And did she ever prove it.

The set-lists for both nights were basically the same, but there were surprises aplenty at both shows. Aretha makes a big entrance down the aisle both nights, but once she gets behind the piano, there’s just Aretha and the piano, and the first notes she sings are absolutely mesmerizing, a sensation that only builds throughout that first performance.

Nothing prepared me, however, for the second show, which had an immediate intensity that, rather than forcing you to sit back, actually draws you in closer so as to better hang on her every word. As to be expected, the highlight is the film and album’s title song, and I’ve never heard “Amazing Grace” performed quite this way before. It’s not just the power of her voice, but her ability to invest the lyrics with an emotion that plainly reveals the depth of her obvious faith.

Franklin rarely speaks throughout the film, a job ably handled instead by gospel legend Rev. James Cleveland. At one point during the “Amazing Grace” performance, Rev. Cleveland is so overcome with emotion that he begins to sob into a towel, and in the only acknowledgment of the presence of the filmmakers in the church, he throws his wet towel at the camera. There are other religious and music luminaries in the pews, including gospel star Clara Ward and Aretha’s father, the Rev. D.L. Franklin. But it’s clear from every frame just who the star is.

“Amazing Grace” is not the prettiest-looking documentary you’ve ever seen. It was shot in 16mm with 1972 stock and blown up to 35mm, and the film’s graininess may come as a surprise to moviegoers who like their documentaries to achieve digital perfection. This is not that kind of film. But trust me, if you open your ears, “Amazing Grace” is one of the most beautiful documentaries in years.

“Amazing Grace” opens today in New York and Los Angeles and will be opening around the country in the coming weeks.