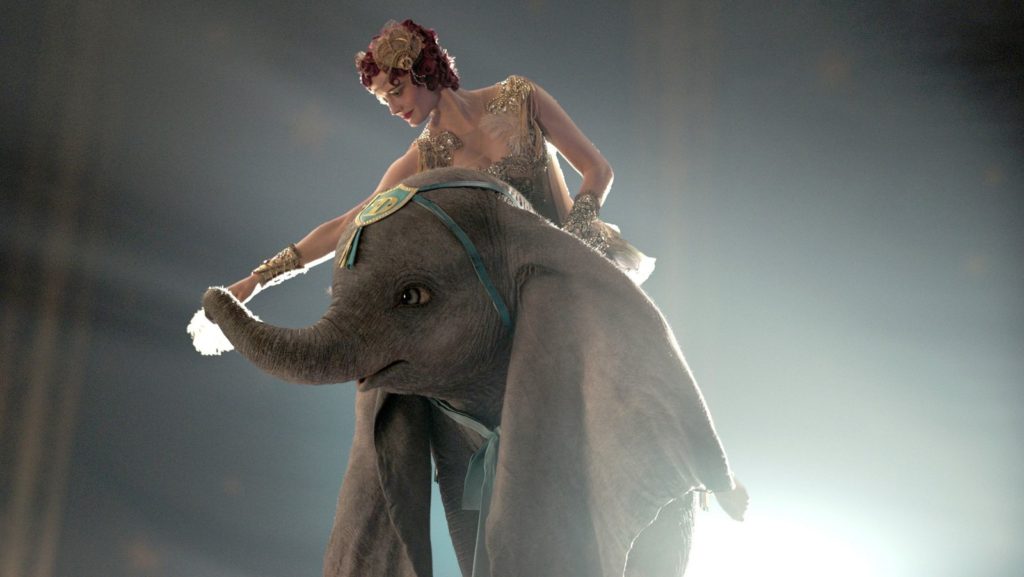 In 2010, Disney took a chance with director Tim Burton who had an idea just how to remake the studio’s animated classic “Alice in Wonderland” and turn it into a live-action film.  The result was not a critical success, opening to largely mixed to negative reviews, but it was a box-office bonanza for the studio, earning $334 million in the U.S. alone and $1 billion worldwide.

Those grosses prompted Disney to produce a series of live-action remakes of its animated classics that turned into a cash cow for the studio.  Most fared better with critics than Burton’s film — 2016’s “The Jungle Book” was dazzling, “Cinderella” (2015) and “Beauty and the Beast” (2017) were both very good, with only “Alice Through the Looking Glass” (2016) and “Christopher Robin” (2018) turning out to be duds.

When I had read that Disney had gone back to Burton to helm a live-action version of the 1941 animated classic “Dumbo,” I was intrigued, feeling that it might be a better fit for him than “Alice.”  After all, “Dumbo” is set in a circus, and there’s always been a carnival-like tone to Burton’s films.  And the director has always been attracted to characters who are at the fringes of society whether it be Ed Wood or Edward Scissorhands or Sweeney Todd.

But “Dumbo” presented a special challenge to adapt to a two-hour live-action feature.  To begin with, the original film is only 64 minutes long and virtually its entire speaking cast consists of talking birds and animals, a challenge for any filmmaker to meet.  Burton had his own ideas.

Gone are Timothy Mouse, the tiny guide who teaches Dumbo to life in the circus, and the quartet of black crows, who teach Dumbo how to fly.  Those birds, whose leader was unfortunately named Jim Crow, became a lightning rod of controversy in the 1960s when the crows’ manner of speaking was perceived as making fun of American-Americans.

The crows won’t be missed, but their famous song “When I See an Elephant Fly” will be, as it is now eliminated completely.  In fact, Burton seems to have deliberately tried to distance his film from the animated classic by tampering with the film’s iconic songs.  The famed choo-choo song “Casey Junior” is now relegated to brief background music.

What Burton does to the original’s most iconic song, “Baby Mine,” however, is downright criminal.  In the 1941 film, Dumbo’s mom Mrs. Jumbo is locked up after being labeled a mad elephant.  Having his mother torn away from him proves to be traumatic to the baby elephant, so Timothy Mouse leads Dumbo to his mother’s cage.  Mrs. Jumbo is not able to see out of her prison, but when she touches and embraces trunks with Dumbo, she knows that her baby is safe, as we hear the lullaby “Baby Mine” in the background.  It’s a heartbreaking scene, arguably the most moving among any Disney animated feature.

For Burton, the scene is there, but he treats it almost as a throwaway, as if he had to include it.  But it lasts under a minute and is devoid of all of the powerful emotions of the original.

In place of the talking animals, Burton has created new human characters.  Colin Farrell is Holt Farrier, a trick rider for the Medici Brothers Circus, who goes off to fight in World War II, only to return home minus one arm.  He is devastated to learn that in the meantime his wife has died, leaving his kids motherless.  (Dead mothers, as we all know, seem to be a contractual part of every Disney animated film.)  In addition, his beloved horses have been sold by his boss Max Medici (Danny DeVito) in order to keep his ramshackle circus afloat.

Now it’s up to Holt’s kids — Milly (Nico Parker) as the science-minded daughter and Joe (Finley Hobbins), his bubbly son — to produce the magic feather that allows the floppy-eared Dumbo to fly.  Dumbo’s flying quickly makes the circus a sensation and brings it to the attention of megolamaniacal entrepreneur V.A. Vandevere (Michael Keaton), who runs a futuristic amusement park called Dreamland.  (Think Disney World.)

Max becomes partners with Vandevere, who promises to take care of each and every act, but really all he cares about his Dumbo and will do anything (and I mean anything) to keep his new star attraction.  This entire second hour is comprised of new material, none of which is memorable and all of it seems to be a betrayal of the simplicity of the original story.  As a side note, I find it curious that Disney would spend $175 million on a film about a corporate entertainment behemoth gobbling up smaller rivals to exploit them, a practice of which Disney, which has recently devoured 20th Century-Fox, has been accused many times.

Even when his movies have gone off the rails, however, Burton has usually been very good with actors.  Not so here.  How do you make Colin Farrell dull?  I’d never seen it before, but Burton manages to do that here.  Parker and Hobbins are fine as the kids, as is Eva Green as a French aerialist (and Vandevere’s mistress) who is ordered by him to fly atop Dumbo.  Keaton is simply terrible as Vandevere — Johnny Depp must not have been available.  (At least we dodged that bullet.)  I for one had no idea what his character is supposed to be — he seems to be screenwriter Ehren Kruger’s idea of what a preening villain should be without providing us with any details as to his motivations other than greed.  The only cast member who seems to be having any fun is DeVito, whose ringmaster character is at least given a story arc, and DeVito manages to make the most of it.

Though “Dumbo” represents a major speed-bump for the Disney live-action juggernaut, it’s not going to slow it down.  We’ve got a live-action “Aladdin” coming just next month and a CGI “The Lion King” remake in July, so buckle up.  In the meantime, if you can spare 64 minutes, why not curl up on your couch and pop in your DVD of the 1941 “Dumbo” and experience what genuinely emotional storytelling feels like?