Keanu Reeves Is on the Run in “John Wick 3: Parabellum,” But the Doggies Are Still Adorable 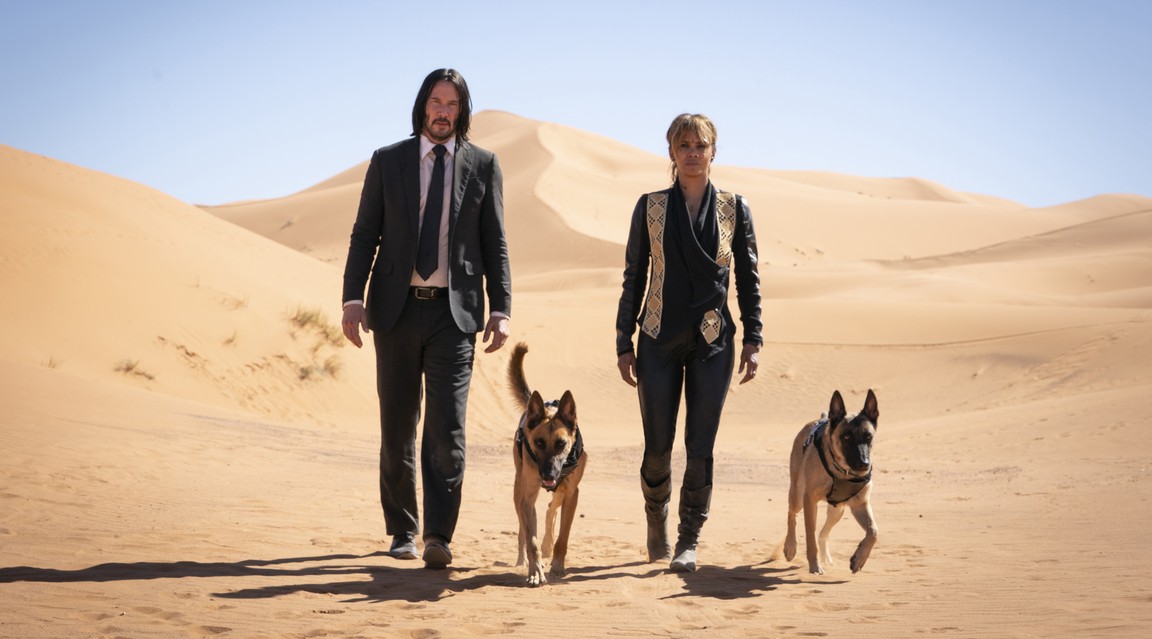 I know that there are a whole lot of film series out there for moviegoers to love, but I have a particular affinity for the “John Wick” series of action films.  Star Keanu Reeves’ career was on a downward slide (in much the same career position that Nicolas Cage is now) when the first “Wick” film in 2014 was released, and I was ready to dismiss it as yet another Keanu straight-to-video programmer, but I noticed that it had earned an 86% favorable rating from the world’s toughest film critics, so I thought I’d give it a try.  Am I glad I did.

If you’re unfamiliar with the “John Wick” universe, here’s what you need to know in three paragraphs.  John, a former contract killer, has retired to settle in with his wife Helen (Bridget Moynahan).  When Helen succumbs to a terminal illness, John, in his grief, turns his affection to his dog Daisy.  However, Russian mobsters invade his home, knock him out, steal his car and in a senseless act of cruelty, kill Daisy.

When John regains consciousness, his old assassin genes kick in, and he wants retribution for the murder of his dog and eventually gets it.  Given his fearsome reputation, John is granted admittance to The Continental, a luxury New York hotel that caters exclusively to the criminal trade and run by the suave Winston (Ian McShane) and his concierge Charon (Lance Reddick).  The Continental, where blood feuds are left at the door, has only two hard and fast rules: absolutely no blood on the grounds of The Continental and all markers have to be honored.

At the end of “John Wick: Chapter 2,” John violates this rule by killing Italian crime lord Santino D’Antonio (Riccardo Sarmarcio) in the lounge of The Continental.  Winston, who has become close friends with John, has no choice but to call out John’s actions and notify the High Table, a group of criminal overlords that run New York’s crime empire who declare that John is excommunicado from the criminal hierarchy.  But in the spirit of professional courtesy, Winston gives John an hour’s head start before assassins from around the world descend on New York to collect the $14 million bounty on John’s head.

Now you’re caught up. “Chapter 3 — Parabellum” begins a few minutes after the last film ended, as John and his new pitbull (still unnamed, whom John saved from euthanasia at the end of Chapter 1) wander through a rainy Times Square en route to the New York Public Library to retrieve some valuable artifacts.  There he is met by an assassin whom John dispatches with a library book.  From there he fights off hitmen in an antique weaponry store (a brilliantly staged sequence) and finally rides off through Times Square on a stallion.  And that’s just the first 15 minutes.

More so than the other “John Wick” films, “Chapter 3 — Parabellum” is structured like a musical (without the songs).  It’s elaborate set-piece after set-piece, with such detailed fight choreography that it’s almost breath-taking in its intricacy.  Still, if I place “Chapter 3” slightly lower in ranking compared with the first two (both of which made my Top 20 films of their respective years), it’s because the set-pieces, as impressive as they are, don’t quite make up for the emotional impact that the first two films achieved — “Chapter 1” had John avenging the death of his dog and “Chapter 2” built up The Continental and entire High Table world about him.

Reeves has grown into his role as Wick, which now fits him very comfortably, even though he plays a character of few words.  (Twitter geeks have clocked him at less than 100 lines of dialogue in this 130-minute movie.)  And McShane is just a delight (as he was in “Deadwood”) as the suave, slightly decadent hotel owner.  This time around, we’ve got two Oscar winning guest stars — Anjelica Huston as a ballet mistress who runs a school for tattooed ballerinas (!) and potential assassins, and Halle Berry as a hitman colleague whose most potent weapon are her two large canines (pictured above, as doggies are a very big presence in the “John Wick” films).  Huston is terrific (I wish there was more of her in the story), and this is probably the best film that Berry has done in the past several years.

Just a warning: the body count in “John Wick 3” is pretty high, and even though it’s mostly black-suited stuntmen being sent to meet their maker, any moviegoer who is squeamish toward violence might consider a safer alternative.  But if you can distance yourself by seeing the great fight scenes as choreography, you’ve got a hoot-and-a-half waiting for you in “John Wick: Chapter 3 — Parabellum.”

The 2020 Democratic Primary Race: Who’s Up, Who’s Down — May Edition