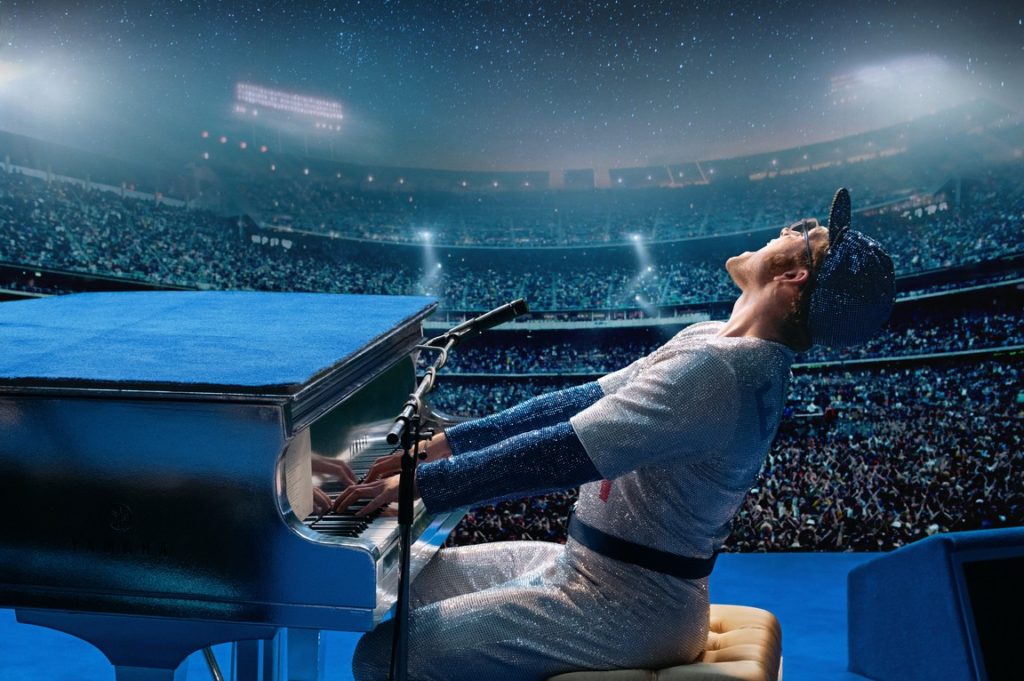 Elton John means so many things to different people.  Kids discovered him through his Oscar-winning songs from “The Lion King,” teens in the 1970s rocked to “Saturday Night’s Alright For Fighting” and those same folks, now in their 60s, probably still get gushy to “Your Song.”  In the intervening years, Elton’s ability to reinvent himself has made him relevant to several generations of music lovers.  Yet being a beloved figure in real life is no guarantee for a successful movie biography.

Luckily, Elton has director Dexter Fletcher at the helm.  When Bryan Singer, the original director of “That Freddie Mercury Thing That Shall Not Be Named” was fired for diddling underage boys, Fletcher was brought in to try to salvage the project and did a good enough job that the whole thing wound up winning four Oscars.

With “Rocketman,” however, Fletcher has a blank canvas all to himself, and the results couldn’t be more different than that previous film.  From an opening image of Elton (Taron Egerton) walking down a corridor in full stage dress, complete with feathery angel wings and devil horns, presumably about to take to the stage, Fletcher’s visuals are on full display.  He uses those visuals to set up expectations, then on occasion, reverses them completely.  The door that the feathered Elton opens leads not to the stage but to a group therapy session where he recounts the major events in his life, starting with his loveless childhood.

From an early age, young Reginald Dwight (Matthew Illesley as a boy, Kit Connor as an adolescent) loved music, developing a particular interest in the piano.  His hateful parents Stanley (Steven Macintosh) and Sheila (Bryce Dallas Howard) show little interest in Reg, but his grandmum Ivy (Gemma Jones) gets him to show his stuff to the Royal Academy of Music where he blossoms over the next few years.

At this point, the film is a fairly standard music biography, but in what promises to be a rote scene at a pub where teenage Reg is singing “Saturday Night’s Alright” to the crowd, when he bursts out the door down the street and into a fairground where he becomes the adult Reg and leads a group of singers and dancers.  All of a sudden, what promised to be just another music biopic with songs has now become a full-fledged musical, and the moment is magical.

That magic continues throughout much of the film.  Fletcher and screenwriter Lee Hall take the time to make sure that each song has some kind of dramatic underpinning and not just tossed off as in a jukebox musical.  And Fletcher has created a number of stirring images to deepen the emotion of each song — the child Reg and adult Reg duetting on “The Bitch Is Back” in glowing color with the accompanying dancers who have their color desaturated, Reg (now named Elton John by this time) physically levitating the audience at his breakthrough gig at West Hollywood’s Troubador nightclub, and a haunting underwater pas de deux that Elton believes are the last moments of his life.  It’s how Fletcher weaves music with emotion that makes these songs which we all know, now seem suddenly so powerful.

That emotion carries through to the dramatic portions of the film as well, with a highlight being the through-line of his partnership with his lyricist Bernie Taupin (Jamie Bell, wonderful) whom Elton loves as a brother, despite their ups and downs.  The scenes that show their creative process are a wonder — it almost comes too easy for both of them.  And it is Elton’s need for love that is present throughout — being deprived of it as a child, experiencing it only through adoring crowds and finally seeking solace in sex, drugs and alcohol (the necessary roadside stop for all music biographies).  It’s not the most novel of motivations, but Elton in real life has acknowledged that it was actually what moved him.

This touches on the most glaring weakness of “Rocketman” — its dependence on the “rise and fall and rise” structure of most music biographies.  All the familiar tropes are here — the hardscrabble beginnings, the big break and the rise to fame, the high life with drinking and drugs, turning on those who love him and hitting rock bottom, and finally the long climb back to sobriety and respectability.  We’ve seen this story a million times and can anticipate each plot milestone coming up.  Still, Fletcher’s razzle-dazzle is one of two reasons why this familiar story feels suddenly fresh.

The other, very big reason is the performance of Taron Egerton as Elton.  I was not a fan of Egerton’s work in the “Kingsmen” movies, but he’s won me over here.  Yes, there’s a certain impersonation quality at work, but given how everyone knows what Elton looks and sounds like, it’s understandable.  Egerton’s performance, however, is far from mimicry — he manages to dig below the man’s spangly surface to reach his motivations and, perhaps more importantly, his doubts.  His struggle to deal with coming to terms with his sexuality is movingly portrayed, and once Elton hits rock bottom, Egerton really nails his almost desperate desire to get his pre-drugs life back.  Did I mention that Egerton sings Elton’s songs with his own voice?  No lip-syncing here.

What’s distinctive about “Rocketman” as a film is that it is one of the few recent music biopics that hasn’t been whitewashed to make the material more audience-friendly.  (Not naming any names here.)  Elton John is, in fact, one of the executive producers on the film and backed the filmmakers’ resistance to tone things down to get a PG-13 rating, stating that he hasn’t lived a PG-13 life.  The language is at times raw, and Fletcher doesn’t shy away from the sex part of sexuality, including a nude sex scene with Elton and his manager John Reid (Richard Madden).  The producers welcomed the R-rating with open arms, and to that I say, bravo!

Yes, you can see some of the story beats of “Rocketman” coming from a mile away, but it’s the joy that Fletcher displays in getting there that makes “Rocketman” so special.

Keanu Reeves Is on the Run in “John Wick 3: Parabellum,” But the Doggies Are Still Adorable