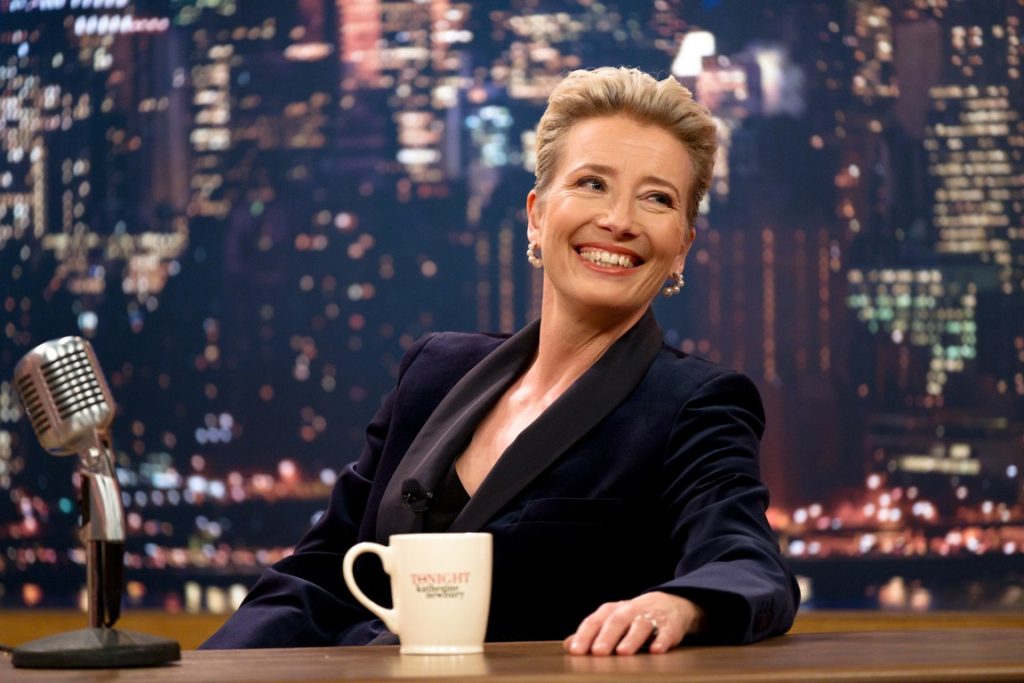 “Late Night” is about an Indian-American woman who is working for a late-night talk show host who is the only woman at the time leading a nightly show.

Full disclosure:  I am a white man whose last job (before creating this esteemed blog) was working for a late-night talk show host (Chelsea Handler) who was the only woman at the time leading a nightly show.

The difference between our two experiences working at the same job is what “Late Night” is all about.

Katherine Bradbury (Emma Thompson) is the first woman ever to host a late-night talk show, a show that began in the early 1990s and which has garnered 43 Emmys in its nearly 30-year run.  But as the years have gone on, the show has become less and less relevant to coveted viewers, a fact not unnoticed by the network, whose new program executive Caroline Morton (Amy Ryan) arrives in Katherine’s dressing room to deliver the news that this upcoming year will be the show’s last.

Katherine has been accused of being “a woman who hates women,” and, looking around her writers table filled with nothing but white men, she begins to understand why.  Knowing that she has a problem, Katherine consults her right-hand man Brad (Denis O’Hare, wonderful) who suggests hiring a gay guy. But Katherine knows that she has to hire a woman and orders Brad to make it happen.

Enter Indian-American chemical plant worker Molly Patel (Mindy Kaling) who fancies herself a comedy writer and somehow wangles an interview with Brad, who, pressured by Katherine, feels forced to hire her on the spot.  Molly is given a three-month trial period, and at first she has trouble penetrating the bro mindset of her fellow writers.  Only when a sympathetic colleague suggests that she stop trying to fit in and start actually writing that Molly finds her true voice for Katherine.

The host begins to notice the uptick in quality to her jokes and asks Molly to confide in her as to what the problem with her show might be.  Molly honestly tells her that the show has gotten too complacent and that Katherine is a little old and a little white.  Turns out Katherine didn’t really want the truth after all.  But that’s just the beginning of complications for Molly.

Several film writers have noted the similarity between “Late Night” and “The Devil Wears Prada” — both are stories of fish-out-of-water newbies having to contend with a tough female boss — but there are significant differences between them.  “Prada” has a much more detailed group of supporting characters — can you ever forget Emily Blunt’s assistant or Stanley Tucci’s confidant?  “Late Night,” however, grapples in a comic way with more substantive issues such as the devaluation of creative women in the workplace and the #MeToo movement in general.

That story has to be told, however, through the eyes of the film’s female characters, because by and large, the film’s male characters aren’t introspective enough to truly articulate their feelings.  The staff of white men around the writers’ table are largely presented as doofuses, pitching lame pirate-skit ideas and afraid of the very approach of Katherine in the hallway.

Instead, the way that Kaling has structured her script is that it’s up to the women in “Late Night” to make change happen, and director Nisha Ganatra makes sure to make that point though, happily, not in a heavy-handed way.

Kaling delivers a delightful fish-out-of-water performance as Molly, but she is canny enough as a writer not to give herself the big juicy role.  That goes instead to Thompson’s Katherine, who dominates every scene that she is in, from bullying her nitwit writers to tenderly caring for her husband Walter (John Lithgow) who has been diagnosed with Parkinson’s.  Her gradual realization that that she has indeed become complacent, fueled by the news that the network is planning to replace her with frat-boy jerk Daniel Tennant (Ike Barinholtz), fires her up to see Molly as an ally to help to keep her show and her job.

Kaling has inserted a plot twist in Act 3 that I think is a bit unfortunate and deprives the film of the satiric bite it really deserves, yet it doesn’t change the good will that “Late Night” has engendered by then.  There have been precious few comedies about the role of women in the workplace (“Prada” and “Working Girl” are the only two that come immediately to mind), but, with its deft combination of sophistication and slapstick, “Late Night” deserves to be counted as one of the best of the genre.

With “Toy Story 4,” The Best Movie Trilogy Ever Has a Worthy New Addition