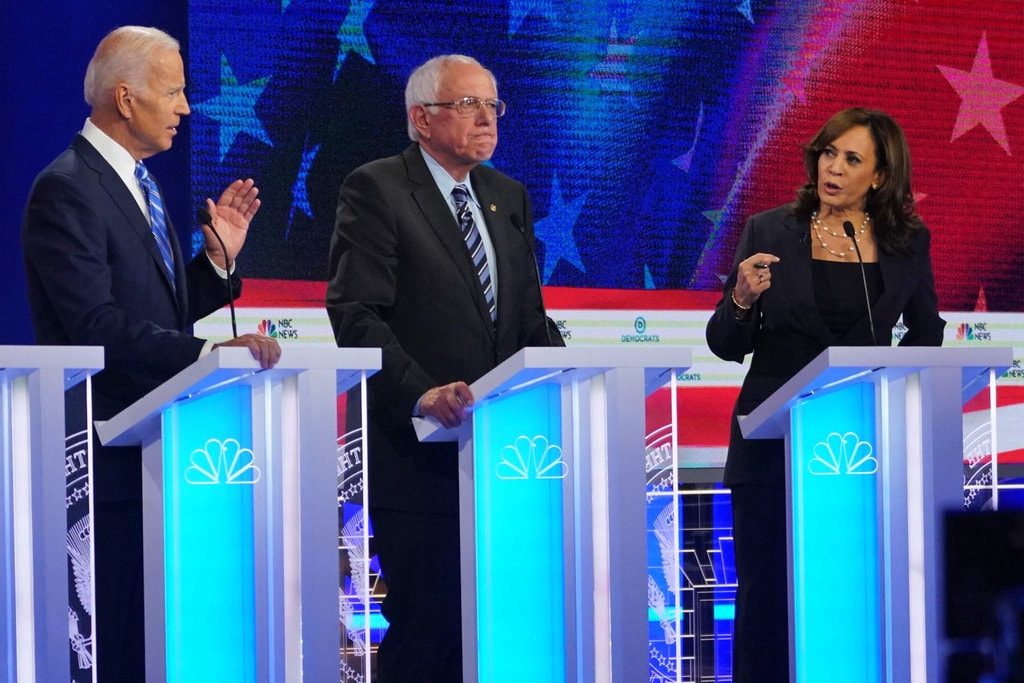 Well, that was not what I expected.

Night 1 of the Democratic Presidential Debates on Wednesday was (with the exception of Julián Castro’s epic takedown of Beto O’Rourke) as genteel as a society matron’s tea party compared with the hockey melee that erupted on a Miami stage in Night 2 on Thursday.

Civility lasted for approximately five minutes into the debate when, after Bernie Sanders finished his answer to the first question, several of those onstage attempted to interrupt.  (They must have seen how genuinely successful Bill DeBlasio’s interruptions were on Night 1.)  The attempted interruptions continued through the first half hour until Kamala Harris raised her arms and said “Hey, guys, you know what? America does not want to witness a food fight. They want to know how we’re going to put food on their table.”  The crowd erupted in approval that there was finally an adult in the room, and even Joe Biden applauded her efforts onstage.

That was not the last the crowd would hear from Sen. Harris.  When the topic turned to race with a question about Mayor Pete Buttigieg’s difficult week handling the after-effects of a police shooting in his town of South Bend, the usual cacophony of interrupters chimed in only to be silenced with Harris’ loudly noting that as the only black person on the stage, she wanted to speak on the issue of race.

Suffice it to say that she detailed her own experience with racial discrimination and how Biden’s comments about working with segregationist senators hurt her personally, particularly since Biden was against school busing in the 1970s, a program that allowed her to go to a good school and get a top-notch education.  Biden retorted (lamely, I thought) that he was only against busing as a Federal program, which I believed (and I suspect that others did too) was a distinction without a difference.

Biden appeared shaken after the encounter.  Over his decades-long career, Biden has been knocked for many things, but his devotion to the cause of civil rights has never been questioned, especially by a person of color.  There had been leaks throughout the week by members of Biden’s staff that he was sloughing off debate prep because he felt he didn’t need it.  Obviously he did, and as the debate went on, he stepped back, relying on mostly rote answers.  (On Friday, Biden regrouped and delivered a much more effective defense of his record at a civil rights luncheon in Chicago.)

In the short term, what does this mean?  Despite protestations from the Biden camp, his campaign was clearly hurt by this encounter, and if there are any sharks among his rivals, they will likely smell blood in the water and pounce.  These will likely be a difficult few weeks for the Biden campaign.  How he responds will be telling on how long he can remain the front runner.

In the long term, voters whose #1 desire is a candidate who can go toe-to-toe with Trump may have to take a second look at Harris.  Though it may have been difficult to visualize before, it’s now much easier to imagine prosecutor Harris filleting Trump with the same precision as she took down Biden.

How will this effect the polls?  I suspect not much.  Biden may go down a couple of points, and Harris might go up a few.  Biden has amassed such a huge lead so far that a few points down won’t make him lose any sleep.  Still, such an unprepared performance as he displayed on Thursday night may seriously impact Biden’s credibility if it happens a second time in the July debate in Detroit.

With that, let’s review the evening’s winners and losers:

KAMALA HARRIS – See above.  One warning for Harris, though.  Her record as a San Francisco prosecutor is about to undergo some intense scrutiny as rival campaigns look for signs of hypocrisy.  She’ll need to weather the next few weeks as well as Biden does.

PETE BUTTIGIEG – The South Bend mayor had perhaps the toughest week of all the candidates, leaving the campaign to return home to deal with a police shooting in which a black man was gunned down by a white police officer who (oops) happened to turn off his bodycam before the incident.  Buttigieg, whose relationship with the African-American community in South Bend has been strained ever since he fired the city’s black police chief, seems determined to repair that rift.  So when Rachel Maddow asked him why there’s still a divide, Buttigieg admitted that he simply couldn’t get it done.  It was such a refreshing bit of honesty from a politician (unlike Trump or Biden, each of whom never seem willing to apologize for anything) that it may have opened the audience’s eyes and ears to the responsibility of actually governing.

JOE BIDEN – See above.  It’s very possible that Biden can get his act together (as he did at Friday’s Chicago appearance) but he needs to recognize that this isn’t 1988 or even 2008.  Jovial slaps-on-the-back just won’t cut it in this field.  He needs to do the same kind of prep work now that the Harris campaign obviously demonstrated in the weeks leading up to the debate.  Harris did her homework, and Biden didn’t.  Putting on my imaginary campaign manager hat, Biden needs to show voters that he really wants this job and that he intends to do something productive with it.  Just running on being Barack Obama’s best buddy can only take you so far if your voters are more focused on the future rather than your past.

BERNIE SANDERS – Where did he go?  After the Biden/Harris dustup, Bernie receded throughout the rest of the evening.  Yes, there was his usual Wall Street/millionaires/billionaires schtick, but it seemed to be dwarfed by what was happening elsewhere on the stage.  Now the Bernie campaign is complaining that other candidates have appropriated Bernie’s talking points from 2016, but the problem is that the candidate hasn’t updated his message.  On the stump, he repeats virtually the same points that only took him so far in 2016, and he needs a new approach.  For the past few weeks, the poll numbers for the Sanders campaign have been down, and, without any new ideas, it’s little wonder that support from the progressive left has shifted instead to Night 1 debate winner Elizabeth Warren who is about to pass Sanders in the polls (if she hasn’t already).

MARIANNE WILLIAMSON – The inspirational author became an internet sensation just moments after she concluded her debate performance, usually in a mocking way.  When Chuck Todd asked for quick answers as to what each candidate would do as their first act in office, we heard others mention gun control, climate change and immigration reform, but Williamson said that first thing she would call the prime minister of New Zealand to tell her the the U.S. is a much better place to live than Christchurch.  (You can’t make this up.)  Seriously, I have friends who regularly attended Williamson’s “Course in Miracles” every Sunday morning for years and felt improved by their experience with her, and I don’t begrudge that.  I know that she (along with Andrew Yang) have an enormous fan base online and can probably make the threshold for the next few debates.  Please don’t, Ms. Williamson.  You’ve worked for decades to establish your brand that has helped people.  That’s where you should be, not the debate stage.

So where do we go from here?  In one sense, candidates who did well in the first two nights of debates (Warren, Castro, Harris, Buttigieg) have to keep that momentum going for the next four weeks until the next series of debates (July 30-31 in Detroit).  For those who didn’t do quite so well (O’Rourke, Biden, Sanders), they have to decide whether they stick to their (failing) game plans or adjust their campaigns to the feedback they have received from pundits and the voters.  It’s a long month until that verdict is rendered.  In the words of Rachel Maddow, watch this space.