“Midsommar,” Ari Aster’s Latest Horror Triumph, Will Stay in Your Head For Days 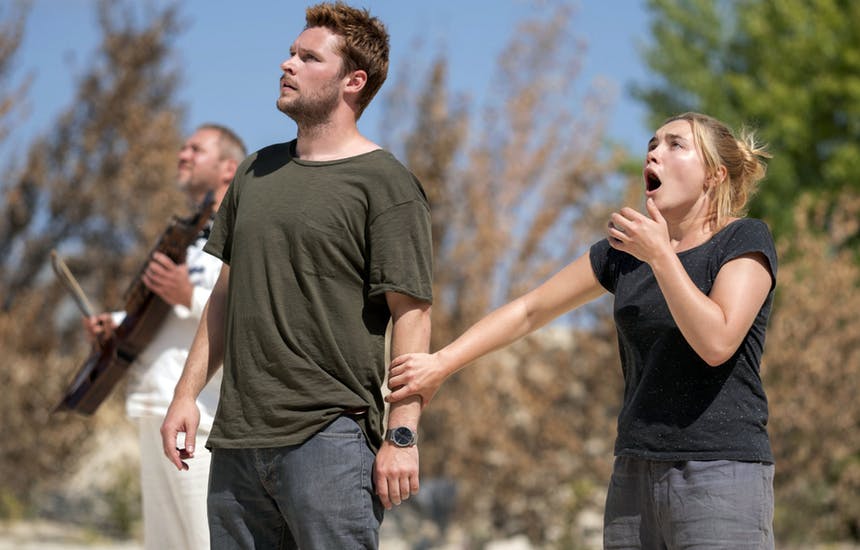 Have you ever seen a horror movie that’s entirely shot in bright daylight?  Neither had I until I saw Ari Aster’s latest horror offering, “Midsommar.”  But if you see it (and I highly recommend that you do), you’ll learn that there’s nothing scarier like being able to see the horrors around you in the harsh light of day.

Remarkably, this is only Aster’s second film as a writer/director.  His first was last year’s enormously scary “Hereditary,” which to my mind is one of the seminal horror films of this decade.  With “Midsommar,” he is batting 2 for 2.

Like “Hereditary,” “Midsommar” deals head-on with familial grief and the lasting effects on those who are left behind.  Here Dani (Florence Pugh), a young student, has been in a long-term relationship with fellow anthropology student and oblivious dullard Christian (Jack Reynor) that is really going south fast.  Christian is about to break up with her and leave on a vacation with his bros, serious student Josh (William Jackson Harper), party boy Mark (Will Poulter) and Swedish student Pelle (Vilhelm Blomgren), but he has yet to tell Dani of his plans.

At that moment, Dani suffers a devastating family tragedy that leaves her distraught, and a guilty Christian, not wanting her to be left alone, invites her to join them for their bros vacation.  To Christian’s dismay, she accepts, and the quintet flies off for a holiday in Sweden, where Pelle brings them to his hometown of Hälsingland, where the people of his commune, the Hårga, are about to begin a celebration that happens only once in 90 years.

While Mark is expecting to see Swedish babes, the group is instead greeted by townspeople of all ages, dressed in flowing white garments, who extend a sincere welcome to their American visitors, choosing to include Dani and her friends in all of their festival activities.  While initially hesitant to join in on the town’s strange rituals, the Americans’ enjoy being treated as family by the Swedes, and soon they become an integral part of the celebration.  Big mistake.

Let me clarify one thing about “Midsommar” — it’s not a “boo!” movie.  It’s not the kind of horror film where things in the dark jump out to scare you.  (Since it takes place in the Land of the Midnight Sun, there’s no dark anywhere.)  The film takes its time, and for the first hour or so, there are no scares at all, just an occasional creepy sense of foreboding.  And when the shocks come (and some are shocking), they mean something because Aster has taken such time to set up the characters and make you care about them.

When I left the theater, I put on my critical hat and recognized just how technically accomplished “Midsommar” is.  But as the week progressed, I noticed myself considering the film to be more disturbing every day (I don’t know whether it says more about the film or my state of mind).  Though the emotional touchstones that the film hits are very much as potent as Aster’s “Hereditary,” I began to realize that “Midsommar” is much closer in spirit to Jordan Peele’s “Get Out.”  Not only does it have a similar set-up (innocents lured into a situation where they are greeted with smiling faces who soon turn diabolical), but there’s a wit to “Midsommar” that echoes back in style to Peele’s Oscar-winning screenplay.

With all of that, “Midsommar” wouldn’t have had a chance of working without the performance of British actress Florence Pugh as Dani.  Pugh has been on the cusp of mainstream success for some time after her critically-acclaimed performance in the 2017 British indie “Lady Macbeth,” and Dani may be the perfect role for her to catapult her to film stardom.  Not only does Pugh nail her character’s scenes of extraordinary grief but, without dialogue to back her up, she communicates to us Dani’s need for a family after her extraordinary personal loss, a trait we need to feel if the third act is to work.

Yes, “Midsommar” runs 2 hours, 27 minutes, and while it certainly would have been more effective with 20 minutes trimmed out of it, it can be argued that we need the extra running time to lull us into a sense of security before the world that Dani knows is turned upside down.

There’s certainly a number of alluring alternatives at the movies right now (“Spiderman: Far From Home,” “Toy Story 4” and Friday’s “The Lion King”), but if you’re looking for a deeper experience than popcorn entertainments, may I suggest that you consider an afternoon in Sweden.  Because “Midsommar” may shake you to your core.

Do Any of the Films from the First Half of 2019 Have a Chance at an Oscar Nomination?