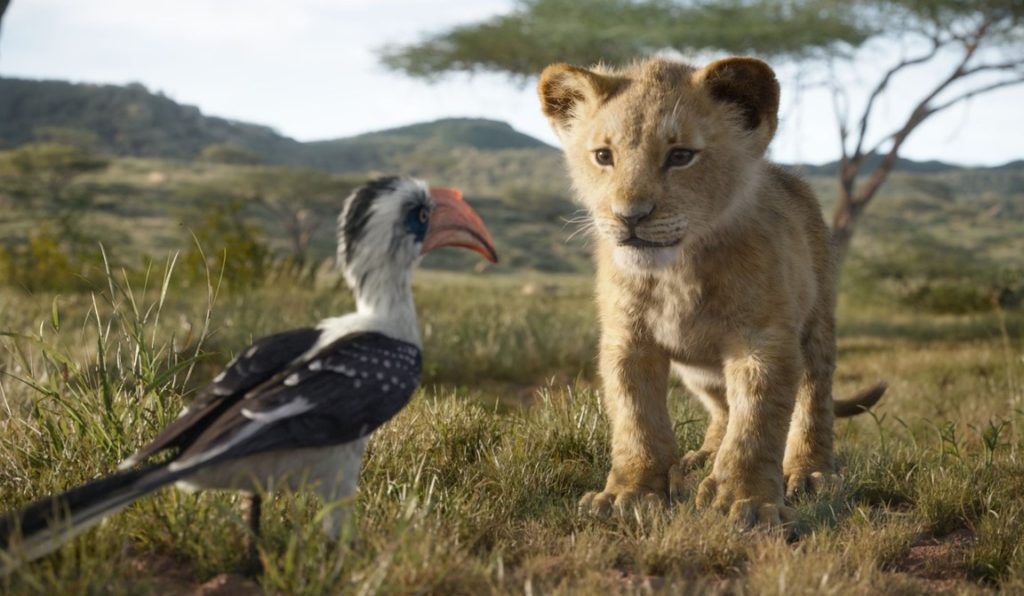 I so admire the 1994 2-D animated “The Lion King.”  I love everything about it — the look, the music, the voice acting, the Shakespearean story, everything.  I especially love the expressiveness of the animated animals’ faces, such as young Simba’s wide eyes at experiencing the world for the first time, and the villainous Scar placing his chin in his hand while listening to the fools around him.  Great stuff.

So when I saw the first stills from Jon Favreau’s computer-generated photo-realistic images for the current remake, my jaw dropped.  Wow, I thought, young Simba (pictured above) really looks like a real-life lion.  This could really bring the story to contemporary life — it could even improve the already perfect, right?

Boy, was I wrong.

This new “Lion King” is but a pale shadow of the glorious animated film that preceded it.  Don’t judge it by the first seven minutes.  The “Circle of Life” opener here is still as remarkable as it was in the 1994 version.  It should — Favreau has recreated it shot-for-shot from the original, and it still raises hairs on the back of your neck by its conclusion.  It’s in these shots were you see the technical wizardry and detail given to making these digital creations look like real animals as they all look up to pay homage to young Simba.  At the conclusion, I would suggest gathering your things and sneaking into the multiplex screen next door to watch something else because you’ve already seen the best part of “The Lion King.”

I do understand Favreau’s desire to take his Oscar-winning visual effects work in 2016’s “The Jungle Book” to a new level.  Could he do it?  The visuals here prove that the answer is clearly “yes.”  But should he do it?  The answer to that is far less clear.

The plot, of course, remains the same.  Mufasa (James Earl Jones), the lion king, and his wife Sarabi (a woefully underutilized Alfre Woodard), give birth to baby Simba (JD McCrary) who is presented to the animals gathered in “Circle of Life” as the once and future lion king.  At the same time, Mufasa’s brother Scar (Chiwitel Ejiofor) steps up his plans to take over the throne by using Simba as bait.

But the execution of that plot here is something else entirely.  For one thing, the original animated film had real voice artists who know how the medium works, with such voices as Moira Kelly, Ernie Sabella and Jim Cummings giving it their all.

Here was have celebrities doing the voice work, and to say it’s a mixed bag is an understatement.  Yes, James Earl Jones is back and providing a wonderful voice link to the previous film.  But Beyoncé?  Look, Queen Bey can do many many things extraordinarily well, but an expressive voice artist she is not.  As the lioness Nala, her scenes with adult Simba (Donald Glover), even in “Can You Feel the Love Tonight?”, are totally flat vocally.  And to varying degrees, most of the the voice work here falls short of the standard set by the voice artists in the previous film.

The major exception is Billy Eichner (“Billy on the Street”) and Seth Rogen, who voice Timon and Pumbaa respectively.  It’s like they’re in another wonderful movie entirely.  That’s the result of one of Favreau’s best creative decisions — to allow Rogen and Eichner to record their lines together as opposed to the usual practice of voice artists recording separately.  As a team, they clearly improvise (in largely the sole deviation from the original “Lion King” script) and manage to riff off each other hilariously like an old married couple.  If Disney is ever considering a spinoff Timon and Pumbaa movie with these two, please…just take my money now!

Chiwitel Ejiofor’s Scar, however, is the best example of what’s wrong with this “Lion King.”  There’s nothing wrong with Ejiofor’s performance per se — it’s Favreau’s photo-realistic Scar that’s the problem.  Gone is the complex characterization of the film’s Shakespearean villain.  The particular lion we see is expressionless with eyes that hardly move and no ability to emote.  I’m not saying that animals can’t emote — anyone who’s looked into a dog’s eyes as he’s pleading for love will know that.  And cats can emote too, though it’s usually seen in looks of disdain.  But lions?  Not so much, and there’s the drawback.

In the 1994 film it was the animals’ expressions, to a large degree, that helped to sell the story and were the heart and soul of the film.  Those aren’t present here, and while the photo-realistic CGI is visually stunning, I miss that feeling from the original.

This is not to say you won’t enjoy it.  Several members of the audience around me said it was the best film they’d seen in a while or wanting to see it again.  But, sorry to say, it didn’t work for me, and as I left the theater, I simply felt that it was an empty experience.  What had made “The Lion King” special was simply not there.

It made me want to do nothing else but to go home and pop in the DVD of the animated film to get back what I missed here.  And once I’m immersed on that animated world, now that’s hakuna matata!

“Midsommar,” Ari Aster’s Latest Horror Triumph, Will Stay in Your Head For Days