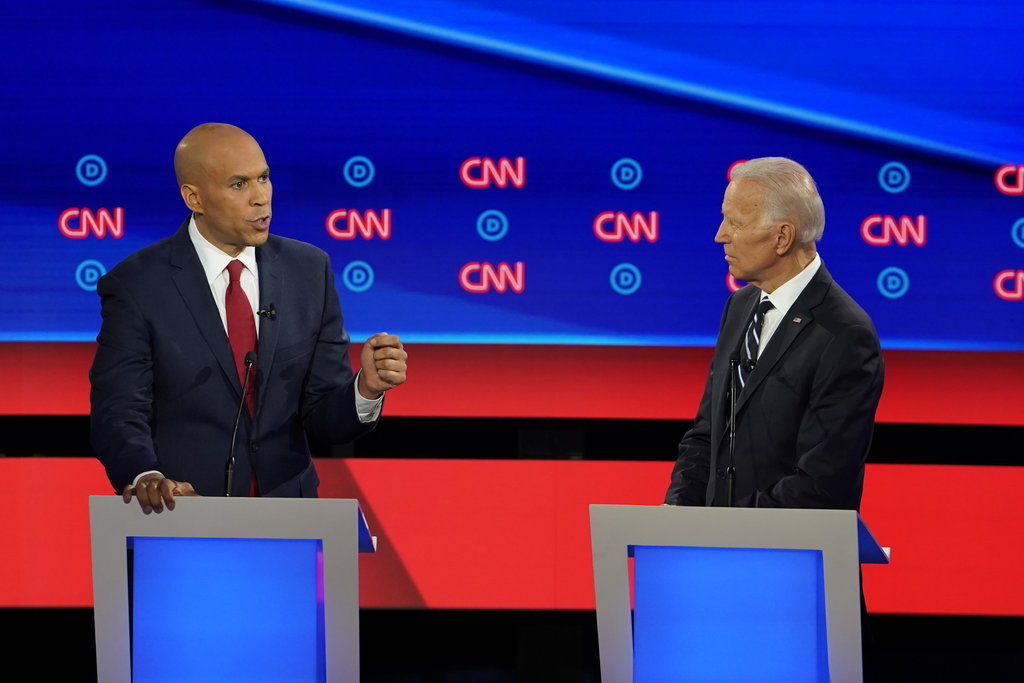 It was billed as Joe Biden’s revenge on Kamala Harris, but Wednesday night’s conclusion to the second Democratic primary debate was much more of a free-for-all than that.

Part of the reason why everybody on stage tried to get in on the action is that this will likely be the final debate for at least 6 of the candidates.  The bar to make the next debate in September has been set much higher than this one — candidates will need to show at least 2% support in four designated polls and collect 130,000 individual donors, both double the standard that it took to make this week’s debate.  As of this moment, only four of the ten onstage would qualify — Joe Biden, Cory Booker, Kamala Harris and Amy Klobuchar, although Julián Castro and Andrew Yang are said to be very close to making it.  If they all do, then the September debate will have 10 participants (including Tuesday night’s quartet of Beto O’Rourke, Bernie Sanders, Elizabeth Warren and Pete Buttigieg) and can be done in one night.  (Thank God!)

Let’s get to the Wednesday night tussle and start with my favorite part of debate analysis: the best lines.

* KIRSTEN GILLIBRAND (on her first day as the Commander in Chief) :

* CORY BOOKER (referencing the effect that Biden’s support on the 1994 Crime Bill had on African-American communities):

“Mr. Vice President, there’s a saying in my community: You’re dipping into the Kool-Aid and you don’t even know the flavor.”

* JOE BIDEN (on the costs of the Medicare For All):

Joe Biden’s “malarkey” is back!  Great stuff.  Now let’s get to the scorecard:

CORY BOOKER — The New Jersey Senator had a rather lackluster first debate in June, but that all changed on Wednesday when, perhaps seeing Harris’ polling success after attacking Biden, took on the former VP on the subject of his criminal justice policies and support for the controversial 1994 Crime Bill.  Booker was lively and animated, and he landed every designated punch.  While it didn’t approach the knockout that Harris achieved in June, it did show that this middle-tier contender still has some fight left in him.

JULIÁN CASTRO — The former HUD Secretary was the only candidate on that stage who has delivered two very strong debate performances so far.  He hit Joe Biden hard on the decriminalization of crossing the border for undocumented workers, which Biden opposes, noting that “One of us has learned the lessons of the past, and one of us hasn’t. What we need is politicians who actually have some guts on this issue.”  Tough stuff, but it might be enough to get him over the line to qualify for the September debate.

JOE BIDEN — After his less-than-great performance in the June debate, all eyes were on the Vice President.  Did he knock it out of the park?  No.  Did he do well?  He did well enough to get by, which is still a major improvement over his last debate.  I’m listing him under “Winners” because of that improvement.  It’s still hard to see his sometimes halting speech next to the sarcasm machine that is Trump, but Wednesday night’s work was good enough to eradicate the argument that he’s too old or befuddled.  On to September!

KAMALA HARRIS — I hesitate to list her under “Losers” because she had a good debate performance, but it was a major comedown from her knockout work in June.  This was the first time on stage that she had to take incoming fire from her rivals, and she got hit from both the left and the right, particularly by Hawaii Rep. Tulsi Gabbard, who seemed to have an endless supply of opposition research on the California senator.  Harris will live to fight another day, and perhaps Wednesday night will help to make her an even stronger candidate.

Andrew Yang — Still on the bubble for making the September debate.  He had one memorable line on Wednesday —  that he is the opposite of Trump because he is “an Asian man who likes math,” and his online following is strong enough to put him over the top with donors.  But can he make 2% in the polls?

Amy Klobuchar — Now that she has secured a place at the September debate, the Minnesota Senator has to create some kind of memorable moment so that she doesn’t get lost in the pack.  It’s been a long time since her noteworthy announcement speech in the snow months ago, and despite having a decent debate performance on Wednesday, nothing she did really stuck.

Tulsi Gabbard — The Hawaii Representative did have a memorable moment when she tossed some verbal grenades at Kamala Harris about the former prosecutor’s record of aggressively prosecuting minor marijuana cases.  Gabbard is a long shot for a September debate appearance, but, if so, she went out big time.

Bill DeBlasio — DeBlasio was his usual brash self onstage and decided to take on Biden for not objecting to President Obama’s deportation policies, a position seen by many as criticism of the 44th President.  The New York Mayor has little chance to make the September stage, so I would hope that he would drop out now and return to the many city problems that currently face him in his day job.

Kirsten Gillibrand — The “Clorox” line was great, but otherwise it was another unmemorable debate performance from the New York Senator.  On paper, she looked like she could have been a top-tier candidate, but whether or not it was many Democrats’ resentment of her for helping to force Al Franken to resign from the Senate, her Presidential campaign never took off.

Michael Bennet — The Colorado Senator had a pretty good debate, expressing the frustration that many have with the focus on Joe Biden’s stand on busing from “50 years ago” while today our schools are still as segregated as they have ever been.  Bennet, who jumped into the race late, probably has too much ground to make up to get to the September debate, but while he was here, he made the case to become the natural moderate alternative to Biden.

The candidates have until August 28 to meet the qualifications for the September debate, with the understanding that those candidates that don’t make that stage have little chance of continuing a viable campaign.  It’s been fun (for the most part) getting to know all of these candidates these few months, but now it’s time to get serious.

This nomination battle will likely be the most important in our lifetime, because if the Democrats nominate a candidate who has little chance to unseat the current occupant of the White House, the consequences will be staggering.  So let’s hope that the Democrats will get this done and do it right.

So to debate fans, see you in September!