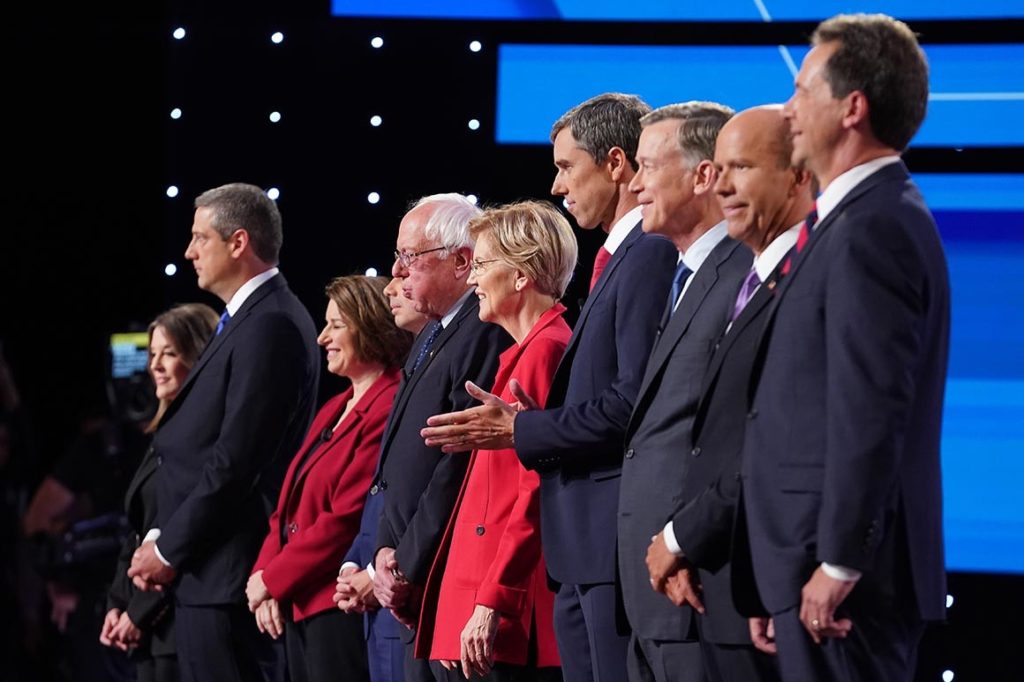 It was moderates vs. progressives on Tuesday night’s first round of Democratic debates held at the Fox Theater in Detroit.

While it was widely anticipated that it would be a death match between Bernie Sanders and Elizabeth Warren to fight for the left-wing crown, the two progressives actually joined forces to fight off seven of the moderates on stage.  (I’m exempting Mayor Pete because he has his foot in both camps.)

For at least six of the participants onstage, this was likely the last time they would have a chance to get their licks in to a nationwide audience.  The bar to make the next debate in September has been set much higher — candidates will need to show at least 2% support in four designated polls and collect 130,000 individual donors, both double the standard that it took to make this week’s debate.  As of this moment, only four of the ten onstage would qualify — Pete Buttigieg, Elizabeth Warren, Beto O’Rourke and Bernie Sanders.

So who had a good night?

Let’s start with my favorite part of debate analysis: the best lines.

“I don’t understand why anybody would go to the trouble of running for President of the United States just to talk about what we really can’t do and shouldn’t fight for.”

* BERNIE SANDERS (in a back-and-forth with OH Rep Tim Ryan over Sanders’ assertion that his plan would cover both vision and dental for seniors):

Great stuff.  So let’s get to the scorecard:

ELIZABETH WARREN — I admire Warren more than I necessarily like her, but let’s face it, she commanded the stage on Tuesday night.  She articulated her positions clearly and cleanly on every answer, which is just what she needed to become the progressive alternative to Joe Biden.

BERNIE SANDERS — Had a good night.  However, not to be a theatre critic, but he really needs to modulate his voice on television.  He started at an 11 and stayed there throughout.  Still, his “I WROTE THE DAMN BILL!” line is a good takeaway from the evening.  At the same time, he and Warren are going to have to engage soon if he’s going to become the sole progressive in the race.

PETE BUTTIGIEG — This debate for Mayor Pete was to establish himself as the half-progressive/half-moderate candidate, and although he was often overlooked from the CNN questioners, he did that job.  The question remains as to whether that position is a wise move or a too-calculated one.

THE FOX THEATER — Jaw-droppingly gorgeous.  As Jake Tapper blathered on in his introduction, the camera took in the interior restoration from the stage of this majestic performing arts palace, and the view was breathtaking.  More shots of it tonight, please!

BETO O’ROURKE —  O’Rourke needed a home run to stay a viable candidate, and he didn’t deliver.  He offered a few appealing platitudes, but in this crowd, he needed more.  Beto, please, drop out now.  This campaign isn’t going anywhere.  A much more promising path for you is to run for the Senate against GOP Texas Sen. John Cornyn.  We need to get rid of this Trump toady, and your fresh voice would be far more welcome in Congress’ upper house.  Please say goodbye to this campaign now.

CNN — What the hell was that format that they came up with?  The moderators –Jake Tapper, Dana Bash and Don Lemon — would ask the candidates to respond to someone else’s attacks.  The candidate would oblige but then would be docked timewise.  When they began to make their own rehearsed statement, most were cut off because they ran out of time, thanks to CNN.  The first hour especially was marred by this frustrating behavior by the moderators.  The policy was rightly blistered on the internet today, so here’s hooping that CNN will listen and change it for Wednesday’s debate.

Marianne Williamson — The inspirational author was still a little wonky (with references to “dark psychic forces,” etc.) but as I clocked it, she got the third biggest applause reaction after Warren and Sanders, a major redemption after her widely mocked nutjob performance in Debate #1.

John Delaney — The former Maryland congressman got a lot of airtime during the debate’s first hour, but his Republican-sounding positions successfully served as a foil for the progressive candidates, and he was finally finished off by Warren’s devastating line about his preoccupation with what Democrats don’t dare do.

Steve Bullock — The Montana governor’s appearance on a debate stage was his first and likely to be his last.  He did make his point that he’s won as a Democratic governor in a Trump state, which might have carried more weight earlier in the campaign.

Amy Klobuchar — I have no idea why her campaign never caught fire.  She’s a good candidate with detailed policy ideas and an agreeable presence (at least to the public), and it doesn’t hurt that she’s from a Midwestern swing state.  She’s possible VP material, but right now at least I don’t think that will happen.

John Hickenlooper — Another candidate that would be much better off if he dropped out now to challenge for a 2020 U.S. Senate seat.  Colorado is a key state, and a Hickenlooper Senate campaign could win.

Tim Ryan — The Ohio congressman was cruising along fine until he questioned Sanders’ knowledge about what was in Sanders’ own bill.  He never recovered from that stumble.

On Wednesday, the remaining ten candidates (including Joe Biden, Kamala Harris and Cory Booker) will hit the stage and have it out.  The debate begins at 8pm EDT/5pm PDT on CNN.  So be there or be square.