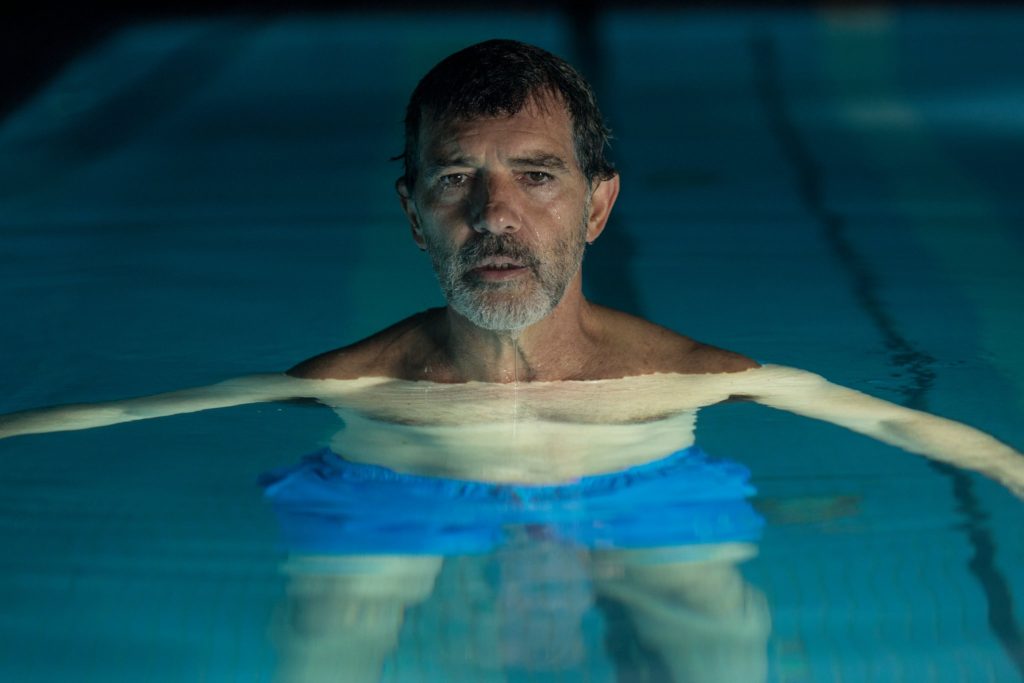 Pedro Almodóvar is back.

“Pain and Glory” is the 21st film by the acclaimed Spanish writer/director who won an Oscar for writing 2002’s “Talk To Her” and has created many of the most acclaimed films of the past three decades (“Women on the Verge of a Nervous Breakdown,” “All About My Mother” and “Volver” among them).

In the past decade, however, Almodóvar’s films have become a little less relevant to where international films were heading, either through fluffy comedies (“I’m So Excited!”) or good but not groundbreaking dramas (“Julieta”).  So it is thrilling to see Almodóvar taking a big step forward by looking back.

As it has been often asked, is “Pain and Glory” Almodóvar’s autobiography on film?  Well, yes and no.  The events in the film are said to be fictitious, but the character of the film director at the center of the action can only be one man.  One can look no farther than the presence of Antonio Banderas (in his eighth Almodóvar film) in the familiar Almodóvar salt-and-pepper hair and beard of the great director to know that Banderas’ role as film director Salvador Mallo is merely a stand-in for the maestro.

Salvador is depressed.  As he ages, the one-time wunderkind of film finds that his body is failing him as he suffers from asthma and migraines and has now developed a bad back, as well as strange fits of temporary choking.  Add to that, he has no film projects on the horizon and no viable ideas for any.  In short, Salvador is a mess.

The only light in his life is the upcoming screening of one of Salvador’s 1980s classic films, “Sabor.”  As excited as he is about it, he’s also a bit nervous, so he reaches out to the film’s star, Alberto (Asier Etxeandia), to whom he has not spoken in 30 years.  (This mirrors a real-life period of estrangement between Almodóvar and Banderas.)  Alberto, who was always a bit of a wild card, offers Salvador a heroin-laced cigarette to help him forget his troubles, and, somewhat warily, he lights up.

Almodóvar postulates that his (or Salvador’s) warts-and-all memories of the events of the child actually made the filmmaker unlock his writer’s block, and Salvador channels these memories into a one-man play which Alberto performs.  Significantly, one member of the audience is the former love of Salvador’s life, Federico (Leonardo Sbaraglia), who tracks down the director to have one last chaste night of reminiscences together.  (Banderas and Sbaraglia have a strong chemistry together here that really sells the idea that these two characters were once lovers.)

Working with Almodóvar made Banderas an international movie star, and like several great actors who become bankable stars, he often chose the paycheck over the role, opting to star in such dreck as “The 13th Warrior,” “Ballistic: Ecks vs. Sever” and “The Expendables 3.”  He hasn’t been pushed to dig deep into his roles in many years.

Here he is pushed by a relentless Almodóvar and finally delivers his best screen performance to date.  Banderas’ approach to Salvador is interior, working from the inside out, revealing slowly the levels of frustration and disappointment that the director feels about where his life and career is going, as well as his determination to make it right again.  It’s an extremely subtle performance without all of the histrionics usually necessary to get an Oscar nomination (though Banderas certainly deserves one for his work here).

Likewise, Almodóvar seems to have pushed himself here as well with a knowing self-reflection that has been so missing from his recent films.  2011’s “The Skin I Live In” and “Julieta” are fine, and even the forgettable “I’m So Excited!” has its moments.  But none of this are major works on the level of his “Women on the Verge of a Nervous Breakdown” days.

Make no mistake about it, “Pain and Glory” is at long last major Almodóvar.  If you have any doubt about it, consider the film’s final shot, one of the most stunning of the year, in which the camera pulls back to offer a revelation that shakes you up and forces you to reconsider everything that you have just been seeing.  It is a simply stunning moment and one that could only have been made by a real artist.  “Pain and Glory” reminds us that Pedro Almodóvar is one of the few we have left.