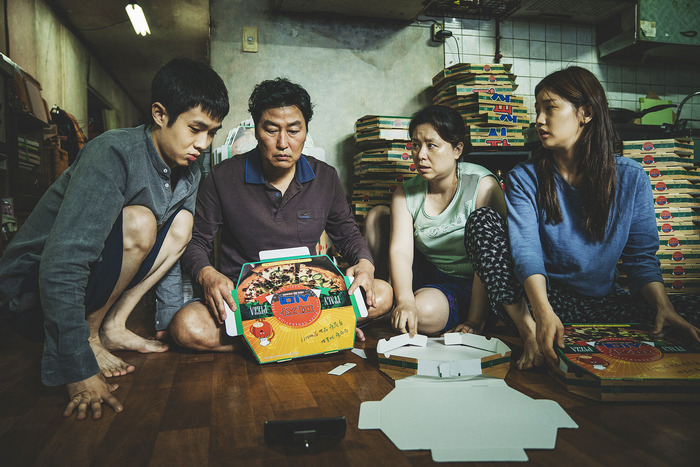 Bong Joon-Ho is a one-of-a-kind filmmaker.  There’s not that many still left.  Quentin Tarantino is one, and Robert Altman was another, filmmakers whose style is so distinct, so identifiable, that any of their films could not have been made by any other filmmaker.  Like Tarantino, Bong loves genre films, whether it’s a police procedural (2003’s “Memories of Murder”), monster movies (2006’s “The Host”) or dystopian futurism (2013’s “Snowpiercer”).  And his newest film, “Parasite,” which is opening this Friday in New York and Los Angeles, is the latest addition to this proud lineage.

In fact, “Parasite” is arguably his best film yet.  In May, it beat a number of high profile films (including Tarantino’s own “Once Upon a Time…in Hollywood”) to win the highest honor, the Palme d’Or, at this year’s Cannes Film Festival.  Its U.S. presence included a screening at the Telluride and New York Film Festivals and will be coming to a theater near you in the coming weeks.

One of Bong’s distinguishing hallmarks is mixing inherently dramatic material with a layer of dark comedy, which few filmmakers would dare to do, but Bong does it again here with enormous skill.  In fact, the opening few scenes feel very much like last year’s Palme d’Or winner, Hirokazu Kore-eda’s “Shoplifters,” which focused on a lower-class family that stole in order to make a living.  In “Parasite,” this family — patriarch Kim Ki-taek (Song Kang-ho), mom Choong Sook (Jang Hye-jin), son Kim Ki-woo (Choi Woo-Shik) and daughter Kim Ki-jung (Park So-dam) — live hand-to-mouth in a semi-basement apartment.  Dad and the kids spend their days trying to sponge wi-fi from their neighbors, while Choong Sook brings in the family’s only income by assembling boxes for a take-out pizza joint.

Opportunity knocks when Kim Ki-Woo’s friend Min (Park Seo-joon), who has been tutoring the daughter of a rich family, tells him that he’s planning to study abroad and asks if Kim might want to take over the job.  Armed with a phony college degree created by his sister, Kim interviews with Mrs. Park (Jo Yeo-jeong) and gets the position.  At one point, he notices a painting by the family’s son and raves about it to Mrs. Park, suggesting the her talented son really needs an art tutor, and Mrs. Park agrees.  Enter his sister as the world’s greatest art tutor.  Now all they need to do is find a job for Mom as a housekeeper and Dad as a chauffeur.

Once that’s accomplished and they are all working for the Park family, it would seem that Kim’s family is solidly on Easy Street.  Not so fast.  It seems that the workers who have been displaced by them want some justice.  And they will do anything…anything…to get their jobs back.  At that moment, “Parasite” turns from being an incisive comedy of class differences and instead sets a tone that’s much closer to Jordan Peele’s “Us.”

Yet even as the film’s tone changes, Bong’s interest in social commentary doesn’t, and his depiction of the effects of income disparity between classes there (and by extension even in the United States) helps to give “Parasite” the kind of heft that is necessary for the film to maneuver through awards season.  An Oscar nomination for Best International Film would seem logical (it’s South Korea’s representative), but the originality of Bong’s premise and execution could garner notice within the wonderfully contrarian Writers Branch, and Bong’s gorgeous imagery may come to the attention of the Directors Branch as well.  If Bong lands nominations in those categories, Best Picture would be the next logical step.  The film is that good.

Until then, circle October 11 on your movie calendar.  No matter what the awards future has in store for “Parasite,” adventurous moviegoers will still have an enormous treat ahead of them.

“Parasite” is a masterpiece.  Don’t miss it.