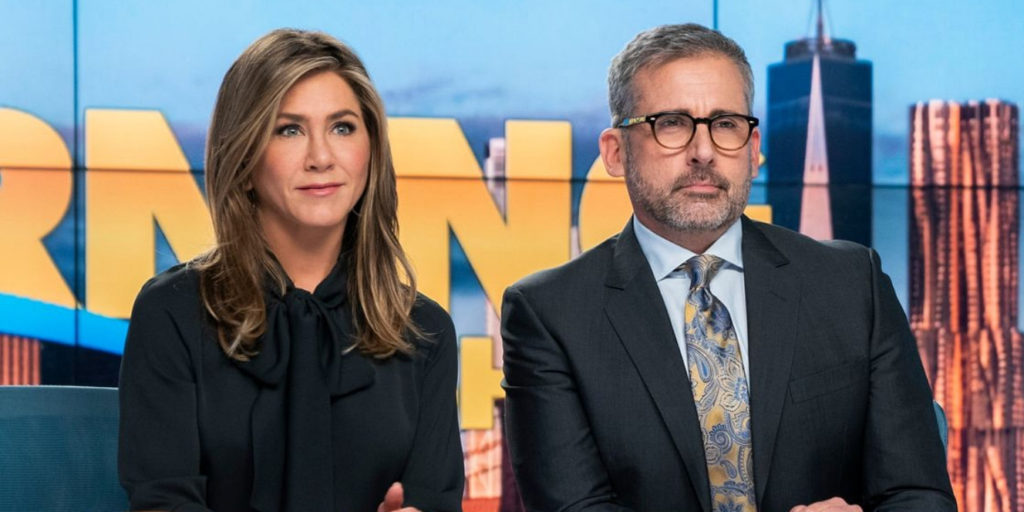 The first shot fired on November 1: The debut of AppleTV+. It introduced four new streaming series, with the promise of many more as the week’s progress. Accessible in about 100 countries, Apple streaming launches with a worldwide reach that will likely dwarf even the mighty Disney+, which has finally flipped the switch on its streaming service.

​According to the Financial Times, AppleTV+ has poured more than $6 billion into original programming for the service, and their plan appears to be rolling out new shows gradually, effectively ensuring that there will be a steady stream of products to keep subscribers happy. On paper, the rollout of only four series, all remarkably different, appeared to be a wise one so that the public can more easily evaluate the quality of their shows.

But are they any good? And more importantly, should you subscribe? I watched the first three episodes of each series and based on viewing those, I have a few thoughts on all four.

“THE MORNING SHOW”
In casting the flagship series of the new network, AppleTV+ spared no expense in signing Jennifer Aniston (in her first TV series since “Friends”), Steve Carell (in his first TV series since “The Office”) and Reese Witherspoon (fresh off her great HBO series “Big Little Lies”) as the marquee names to lure viewers to the new platform. My entire career has been in TV and having trudged several decades in this world, I love TV series that are set in TV – “The Mary Tyler Moore Show” of course, and I was even the rare fan of Aaron Sorkin’s “The Newsroom.” With this cast and this setting, “The Morning Show” seemed like it was made for me. Only… it isn’t.

Here’s the problem. The pilot’s teleplay by Kerry Ehrin & Jay Carson shoots like a rocket out of the gate, as morning show co-anchor Alex Levy (Aniston) is awakened at 3:30 am to the news that the network has fired her trusted friend and co-anchor Mitch Kessler (Carell) over sexual improprieties. Now, we don’t know Mitch and probably assume that he’s some kind of asswipe like Matt Lauer, but when we meet him, he’s Steve Carell for goodness sake and, while admitting his culpability, he clearly has a positive road to redemption ahead of him.

The series’ focus then shifts from being a workplace drama to a commentary on the #MeToo movement, where it’s decidedly less successful. After all, how can you expect an actor to deliver a whopper of a line like, “The whole #MeToo movement is probably an overcorrection for centuries of bad behavior that more enlightened men like you and me had nothing to do with.”

That’s a mouthful. Obviously, the line is well-intentioned, but it’s so on the nose that what is meant to be insightful comes off as pretentious. And that’s not atypical of the writing here, particularly in the pilot episode. Episode two marks a slight improvement, as it lays off the oratory and allows us to get to know Alex’s feisty new co-anchor, internet sensation Bradley Jackson (Witherspoon). Episode three settles things down quite a bit, suggesting a possibility that there is an effective series somewhere inside of “The Morning Show”; but clearly, it’s not there yet.

“SEE”
AppleTV+’s other marquee series is the sci-fi dystopian epic “See,” which creates, years into the future, a world in which a virus has wiped out most of mankind and rendered the few remaining survivors blind. As a result, mankind is reduced to literal tribalism, living in caves, swinging axes and wearing lavish fur vests.

Of necessity, series creator Steven Knight (“The Hunger Games”) has focused most of “See’s” first three episodes on world-building, attempting to construct a convincing framework for a society which, deprived of sight, has to rely on other senses in order to survive. But the downside of world-building is that it can come at the cost of characterization, and that’s what “See” is sorely missing here. The tribe’s leader Baba Voss is convincingly played by hulking Jason Momoa, who not only adds a welcome “Game of Thrones” connection to the proceedings but has proven to be a good actor, often adding convincing nuance to many of his he-man roles. Here he’s given brief opportunities to show what he can do (particularly in his desire to become a father), but he’s usually relegated to simply swinging his ax and saving the day.

More welcome is Alfre Woodard as wise-woman Paris, who, despite her blindness, can nonetheless see into the future. In many ways, it’s a ludicrous role, but Woodard is enough of a pro to make the at-times labored gobbledygook she is given to say believable. Beyond the leads, however, few other characters make much of an impression, as it quickly becomes apparent that in “See,” the concept is the star. And the concept, with dozens of sighted extras looking every which way to convince us that they are blind, might actually have played better on the page than on the stage.

“FOR ALL MANKIND”
With all of the recent programming commemorating the 50th anniversary of the moon landing, I felt that I was a bit NASA-ed out when I approached “For All Mankind.” To my enormous surprise, I found that the series actually has something different to offer as it asks the provocative question: What if the Russians made it to the moon first?

This alternative history begins with the most kinetic first act that I’ve seen in a TV drama this year. After learning that the first foot on the moon was a Russian one, the Apollo astronauts are urged by boss Deke Slayton (Chris Bauer) to take the day off and tie one on to exorcise their frustrations, all set to Jimmy Ruffin’s “What Becomes of the Brokenhearted?”. (It’s a wonderful blend of music and top-notch direction by Seth Gordon.) They hop into their collection of multi-colored Corvettes and race to the nearest bar where all goes well until drunk astronaut Edward Baldwin (Joel Kinnaman) flaps his lips to a reporter expressing his frustration with NASA for the loss. And off we go.

By necessity, the story slows down a bit from here (and to be honest, several of the scenes in later episodes begin to slog), but the idea that the space race continues on through the years, perhaps decades, is a solid nugget on which to hang a series. Add to that the series’ refreshing look at women in the space program, both in the inner workings – Wrenn Schmidt is excellent as Margo Madison, the first woman to have a seat in mission control – to the search for female astronauts, adding a focus on women that most space films rarely take.

“For All Mankind” may not have the budget of a “First Man” or the reality of “Apollo 11” but it does have something to say. It might not be a home run, but it’s a solid double, and at this point, AppleTV+ needs any kind of a hit.

“DICKINSON”
You would think that the life of 19th-century poet Emily Dickinson had been amply covered in the arts, from the almost-limitless number of biographical books still in print, to the stage (Julie Harris’ inimitable Emily in “The Belle of Amherst”) and even the screen (Terence Davies’ superb 2016 film “A Quiet Passion”). Now we have a television series created by Alena Smith, and I’m not quite sure what to make of it. Is it an inspired update of the Dickinson life story to serve both as a commentary on her life and a relatable introduction to it for a younger audience? Or is it instead, a ridiculously-hip CW-like version of her life?

After all, when 19th-century characters relate to each other with lines like “What up, sis?”, “What’s chillin’?” and “I’m pretty psyched about it,” how can you hold back a major eye roll? Still, Smith displays a solid knowledge of Dickinson’s works, and the episodes are strongest when Emily is at her desk, creating the timeless prose (projected onscreen) that has lived on for many decades since. Even when the series swings wildly for the fences – such as when Death (Wiz Khalifa, who’s actually pretty good) shows up in an elegant carriage pulled by horses made solely out of lights – it still manages to connect with the essence of Dickinson’s work.

Best of all is Oscar nominee Hailee Steinfeld as Emily, an unusual casting choice given how contemporary an actress she is seen to be, but she appears to understand the artistic passion that drives Emily, choosing to embrace even Death if it means that she is free to express herself through her art.

“Dickinson” is wildly uneven, from too-hip-for-the-room moments that will make you wince to times when there is a genuine insight into the legendary poet’s work. As for the yet-unscreened episodes, let’s hope that the hipster elements can be wrestled to the ground by the profound ones, an outcome that might allow “Dickinson” to take flight.

The premiere of this series quartet is only the first step for the new service, with feature films soon to be released as well. In fact, one such AppleTV+ film, “The Banker” starring Samuel L. Jackson and Anthony Mackie, is even making a serious play this year for Oscar consideration. So AppleTV+ has made its intentions clear that it aims to be a serious player.

With the arrival of Disney+, the battle lines have been firmly drawn. So let the streaming wars begin!

This article first appeared on Next Best Picture.