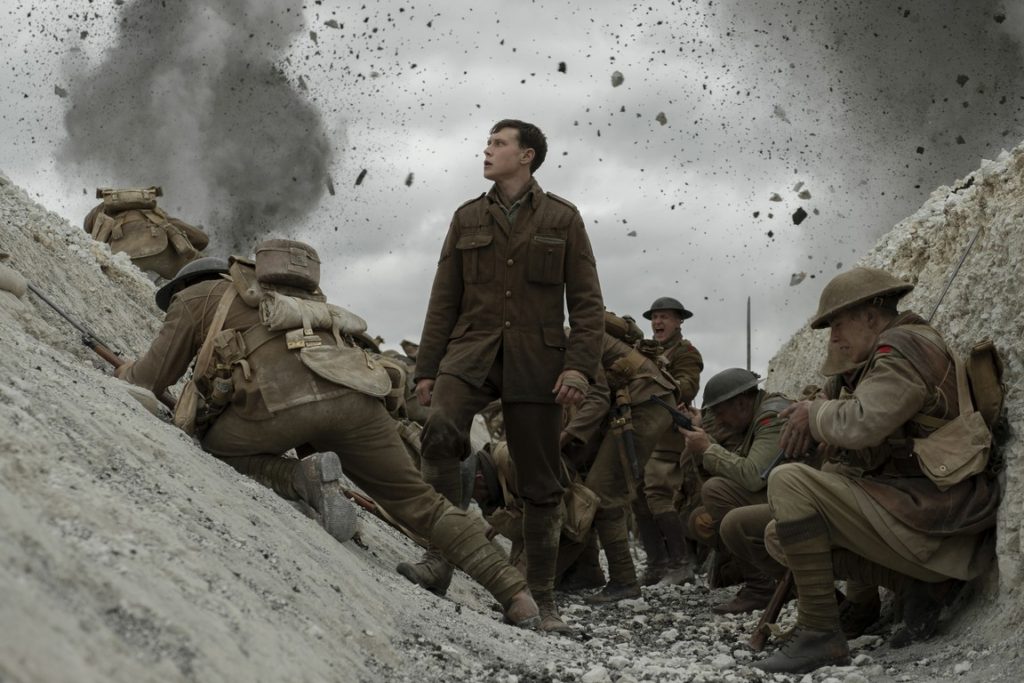 Sam Mendes’ “1917” is a strange case.  The film, which is currently playing in New York & Los Angeles and will be released across the country in January, presents a strong story of two soldiers in World War I who are assigned to deliver a message to call off an attack to a unit that is walking into a trap.

Mendes, who won the Oscar for directing his debut feature “American Beauty,” has decided to film this particular story in what is supposed to be a single long take.  (It really isn’t — there’s some definite places where he cheats, but let’s go with it for now.)  Single take films are a tricky business — there are some great films with single take openings, such as Orson Welles’ “Touch of Evil” (1958) and Robert Altman’s “The Player” (1992), but I think that the only single-take films that have really worked in their entirety are Alexander Sokurov’s “Russian Ark” (2002) and the Oscar-winning “Birdman” in 2014.

It’s an audacious idea which I would normally endorse, but having seen the film two times now, I’m not quite sure that this technique is the right approach to this particular story.  For one thing, we’re only following two people — Lance Cpl. William Schofield (George McKay) and Lance Cpl. Tom Blake (Dean-Charles Chapman), whose brother is one of the soldiers who will be massacred if they don’t make it to the front on time, which creates an effective ticking-clock kind of storyline to the film.

The problem for me with “1917” is the fact that the duo’s mission largely takes them through the trenches of World War I, a repetitive visual that began to contribute to my lessening interest in the film as it went on.  I know that this was not what Mendes intended, but, after a while, “1917” began to feel like a first-person-shooter video game, the kind of “Which of these two guys is doing to get picked off first?” kind of thing, which is not a good place at which a serious film should be.

Chapman delivers a solid performance, and McKay is even better as his relief at completing the mission is palpable.  For a realistic war film, Mendes has included several annoying celebrity cameos (“Look, there’s Colin Firth!” “Look, there’s Benedict Cumberbatch!”), though the lesser-known character actors, such as Mark Strong, Andrew Scott and Richard Madden, come off much better.

As much as I bitch about “1917,” there are two elements of the film that are absolutely stellar.  The first is the cinematography of the legendary Roger Deakins.  It’s an enormous challenge to plot out the photography of a film that is designed to be done in one take, and of course, Deakins rises up to meet that challenge.  He was nominated for an Oscar 14 times before finally winning for “Blade Runner 2049,” and his extraordinary work here really deserves a second trophy.

The second is the absolutely gorgeous score by Thomas Newman.  The son of the famed composer Alfred Newman, who won nine Academy Awards, and the cousin of the legendary Randy, Thomas’ work has brought him 14 Oscar nominations and zero wins.  Wake up, Academy!  You’ve got a gem here in Thomas Newman, and it’s about time that you give him an “Atta boy!” and a statue, because this score is really one for the ages.

For Mendes, who has recently divided his time between film and the stage, “1917” is a passion project, as much of the inspiration for the film came from his grandfather Alfred who served in the war.  And the things I liked about the film seemed to come from that personal spot — there is a passion in Mendes’ script, co-written by Scottish historian Krysty Wilson-Cairns, that comes across in the writing.

I just wish that the passion that seems so evident in the writing came across as well on the screen.