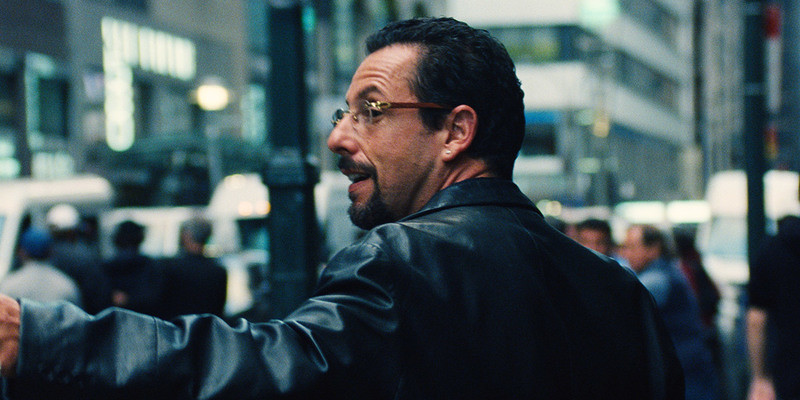 With the Christmas season coming to a close, I’ve tried to keep to the spirit of the season by reviewing lovely films about popes, little women and Mister Rogers.  But now I’m in the mood for something nasty.

And I’ve found just the thing with “Uncut Gems,” the latest film from the brothers Josh and Benny Safdie.  The Saftie brothers are known for making scripted dramas with the motion and intensity that is often associated with thrillers.  Their lauded 2017 crime film, “Good Time,” starred Robert Pattison in his first major post-“Twilight” critical success and provided the actor with a great role that has led to further independent film acclaim for the increasingly dynamic Pattinson.

With “Uncut Gems,” the Safdies have switched things up yet again by casting Adam Sandler in the unlikely role of Howard Ratner, a jeweler who operates his precious stones business in the 47th Street Diamond District of Manhattan.  Howard is a compulsive gambler and womanizer, and with his trademark eyeglasses, leather coat and scruffy goatee, he is a recognizable figure in the district, particularly by the thugs to whom Howard owes too much money.

Howard’s personal life is not so hot, either.  His soon-to-be-ex-wife Dinah (“Frozen’s” Idina Menzel) is making life miserable for him, while his current mistress Julia (Julia Fox) also works at his jewelry store, a situation that makes his life at work a tad uncomfortable.  Plus he owes serious money to his brother-in-law Arno (Eric Bogosian) who is not hesitant about using muscle to get back what Howard owes him.

In 2012, Howard is actively trying to lure professional athletes as customers so that he can sell them some bling. On one fateful day, Howard’s assistant Demany (Lakeith Stanfield) brings in Boston Celtics superstar Kevin Garnett (excellent as himself) who spies a priceless uncut black opal in Howard’s store and asks if he could borrow it that night as a good luck charm in his game against the 76ers.  Howard believes that the stone brings good luck as well but reluctantly agrees to the loan (with Garnett’s championship ring as collateral).  Howard immediately pawns the ring and uses the cash to bet on the Celtics, given Kevin’s newly loaned good luck.

It only goes downhill for Howard from here, including being locked naked in a car trunk during his daughter’s school play by thugs working for Arno.  I mean really downhill, yet the sorry spectacle is still gripping to watch.

The Safdies hit the ground running, revving their film up to 100mph and never taking their foot off the gas.  At one point, I said to myself “Would you please let us breathe?” but they won’t.  “Uncut Gems” is intense and  relentless, so brace yourself.  You won’t lose any weight watching “Uncut Gems,” but you’ll know you’ve been through a real workout (in the best way possible).

The intensity that the Safdies bring to the film is helped no end by both the crackerjack editing by Ronald Bronstein & Benny Safdie, and the driving score by Daniel Lopatin.  But for most audiences, the person they would feel is most responsible for driving the pace of the film is the man on the screen, Adam Sandler.

Movie fans likely know that Sandler has previously revealed his dramatic chops with top directors in such films as James L. Brooks’ “Spanglish” (2004), Noah Baumbach’s “The Meyerowitz Stories” (2017) and particularly Paul Thomas Anderson’s “Punch Drunk Love” (2002).  But almost inevitably, instead of capitalizing on his newfound critical acclaim, he has run back to his comfort zone of such dopey Netflix comedies as “The Ridiculous 6” (2015) and “Murder Mystery” (2019).

Let’s hope that he doesn’t slide back again, because in “Uncut Gems,” Sandler gives the performance of his career, one that has already been celebrated by a large number of critics groups.  It’s a surprisingly immersive performance by Sandler — without using makeup or prosthetics, Sandler became Howard for me.  After 5 minutes, who I saw on that screen was a 47th Street jeweler who is in over his head, and, desperate to get above water, makes one bad decision after another.  Yet Sandler truly makes us care about this man, which prompted me to yell at myself, “No, Howard!  Don’t place that bet!”  And, of course, he does.  Sandler makes you care — he is that good — and it remains as one of the best male performances of the year.

Yes, “Uncut Gems” might seem to be an unlikely attraction for the holiday season — squirming in your seat in anticipation of what’s coming next might not be everyone’s idea of New Year’s fun.  But, I promise, you won’t soon forget a film with such power and such a great central performance.