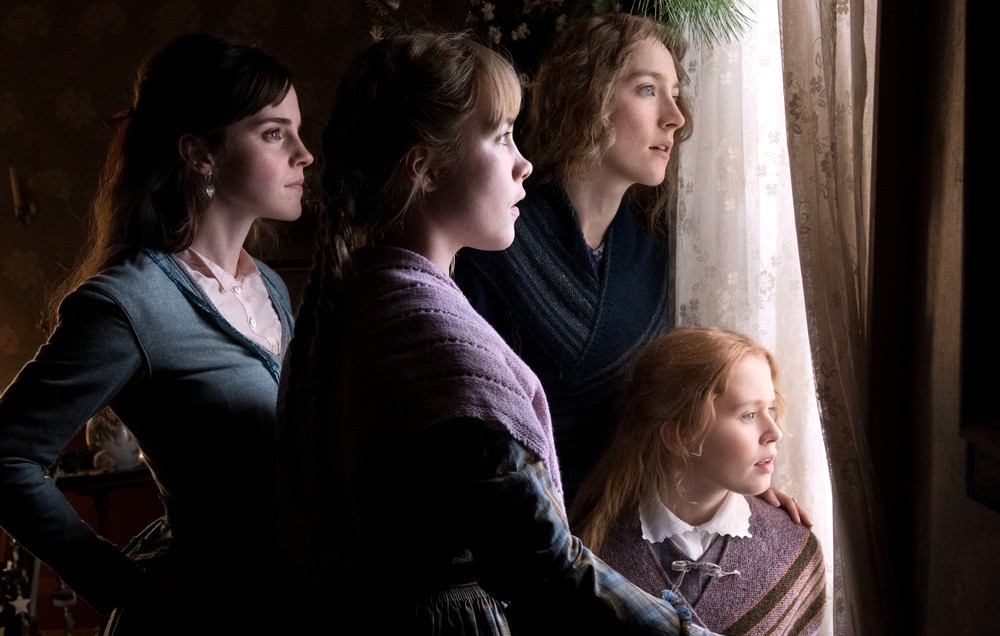 Among the many terrific things (and there are many) about writer/director Greta Gerwig’s adaptation of the beloved Louisa May Alcott novel “Little Women” is that, although Gerwig’s script is faithful to the book, she adapts it with a freshness that makes you think that you’re seeing the story for the first time.

Not counting adaptations for radio, television, the stage and opera, Gerwig’s movie is the eighth film version of the book.  I’ve only seen four of them — Mervyn LeRoy’s 1949 film with June Allyson and Elizabeth Taylor which is just OK, George Cukor’s 1931 film starring Katharine Hepburn which is one of the best, the 1994 adaptation by Gillian Armstrong with Winona Ryder which is pretty terrific, and now this version, which I think is my favorite of all.

In case you’ve never encountered “Little Women” in school or in any medium, the story focuses on the March family living in New England in the 1860s, shortly after the end of the Civil War.  Father March (Bob Odenkirk) has yet to return home from the war, so the March home is being run by his wife Marmee (Laura Dern) and the family’s four daughters — Jo (Saoirse Ronan), Meg (Emma Watson), Amy (Florence Pugh) and Beth (Eliza Scanlen).  Living in her mansion nearby is their haughty Aunt March (Meryl Streep, in full Maggie Smith mode).

Jo is a headstrong young woman, determined to go her own way someday as a writer, much to the frustration of some people around her.  Meg, the eldest, on the other hand, conforms much more to what 19th century mores dictate a young woman to be, looking for love and security in marriage.  Amy, though an aspiring artist, also heeds Aunt March’s admonition to marry rich, because wealth would be the only way for Amy to achieve the artistic freedom she wants.  Beth, the youngest, is a young pianist in search of a piano, which she finds in the nearby mansion of neighboring widower Mr. Laurence (Chris Cooper).

Mr. Laurence’s grandson Teddy (Timothée Chalamet) has a thing for Jo, who has no time for romance being so focused on her writing and dismisses him with the nickname “Laurie.”  But Laurie embraces his nickname and, despite being the catch for any girl in town, still has his eyes on the unattainable Jo.  You know the story…

But as the film begins, we see that Jo is an adult, already a writer who is pitching a story to an onery publisher (Tracy Letts).  OK, I thought, then the rest of the story will be a flashback.  And sure enough, we’re soon back to when the March sisters were girls.  Then we’re back to them being adults again.  Wait, wha?  It took me a few more moments for me to realize that Gerwig has deconstructed “Little Women” into two separate timelines.

And you know what?  It works.  For the first time in any “Little Women” film, Gerwig has forced me to really pay attention to the story.  For example, if we see the beginning of a promising romance and follow it right away with the romance being over, we want to know what happened in between, so we become far more invested in the material and the characters.  Gerwig takes a risky chance here by tampering with a classic, but by God it pays off.

Ronan is absolutely terrific as Jo — the “Lady Bird” star seems to have something extra brought out in her acting when she’s working with Gerwig.  Another standout is Pugh as Amy, investing this most difficult of Alcott’s characters with a certain sense of non-judgmental righteousness — she does what she does because she believes it’s the right thing to do.  In fact, every actor in the ensemble — Watson, Scanlen, Dern, Odenkirk and Streep (who’s a hoot) — is in top form.  And like his “Lady Bird” co-star Ronan, Chalamet as Laurie gives a depth to the character under Gerwig’s direction that I had never seen in Laurie before.

The main complaint I had heard about “Little Women” before its release was some version of “Why do we need another version of ‘Little Women’?”  If it’s this Greta Gerwig “Little Women,” we most certainly do.

Now Playing In Your Living Room: Eddie Murphy Returns and Rules in “Dolemite Is My Name”