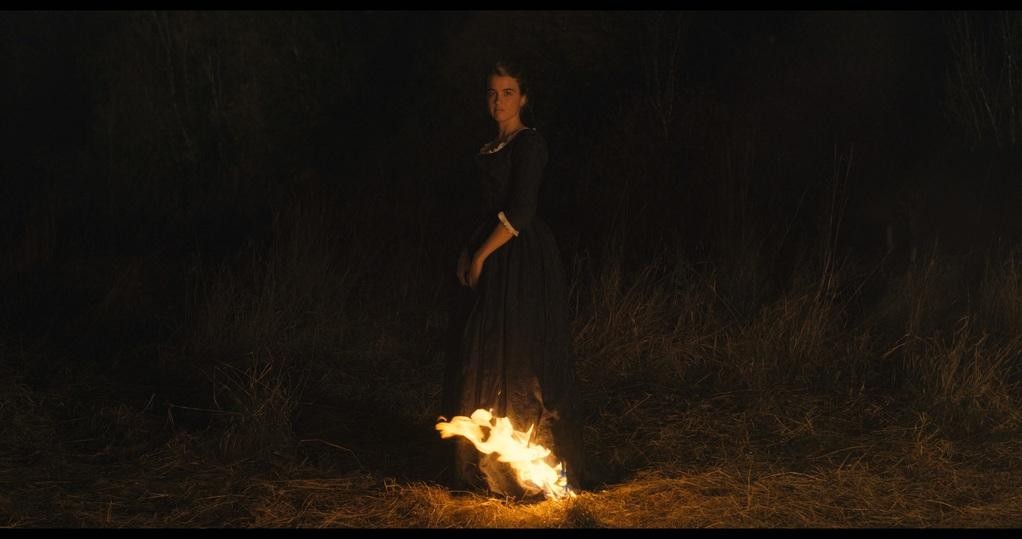 The French-language film, which returns to American cinemas on Valentine’s Day, is set at the end of the 18th century and focuses on artist Marianne (Noémie Merlant) who is hired by a countess (Valeria Golino) to paint a portrait of her daughter Héloïse (Adèle Haenel) who is about to be betrothed to a Milanese count.  Héloïse, however, has made it very plain that she has no intention of sitting for a portrait, because she secretly wants no part of this marriage.  So Marianne is hired to be a “walking companion” to Héloïse, and on their walks Marianne has an opportunity to make a mental image of her that she can then sketch and turn into a portrait.

Héloïse, however, is not an easy person to get to know, even to us in the audience.  The first time we are introduced to her, she is hooded and walking away from the camera, and after a long stroll, she finally turns around and pulls down her hood so that we (and Marianne) can at last see her beauty.  It soon becomes clear to Marianne, however, that Héloïse has erected emotional walls around her to prevent her from being hurt — walls that Marianne realizes that she will need to penetrate.

The result is a portrait that looks so perfectly neutral to strangers but, as we are clued in to their relationship, has much more meaning to us.

Sciamma’s precise direction of her actors is not splashy, but instead small and precise, which is just what this material needs.  The fact that Sciamma directs both Merlant and Haedel to modulate their performances may be without the grandiose drama we might have expected from a period romance, but her approach is so right for the material.

Merlant and Haedel are both pitch-perfect in their roles.  One is not better than the other because their strength is as a team.  They make you believe that this couple is absolutely right for each other, and that, in such a period piece, is an enormous acting accomplishment.

Just a word for the remarkable cinematography by Claire Methon.  Her framing of the imagery devised by Sciamma is at times breathtaking — to my mind, it’s the best and most expressive cinematography of 2019, equaled only by Roger Deakins’ single-shot work on “1917.”  How Methon captures her images to bring out the most to reveal the film’s characters is outstanding and one that film schools should teach as how understated camera work can bring out character more than a more show-offy style.

Bewilderingly, the Academy chose to ignore “Portrait” at the Oscars, but I guarantee you that this film will be remembered far longer than several of the bromides that have been nominated this year.  See it today so that you will have bragging rights over your friends who will rave about it years from now.

“Just Mercy” May Be a Bit Too On-the-Nose in Its Script, But a Terrific Cast Helps To Save It

Alfre Woodard is a Powerhouse in the Thought-Provoking Prison Drama, “Clemency”