Now Playing in Your Living Room: If “Military Wives” Was Dinner, It Would Be a Comforting Meat Loaf 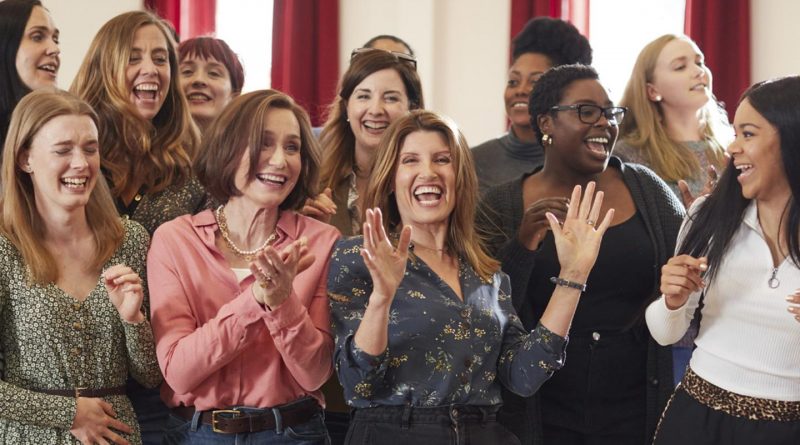 “Military Wives,” directed by Oscar nominee Peter Cattaneo (“The Full Monty”), had its world premiere in September 2019 at the Toronto Film Festival and was the closing night film at January’s Palm Springs Film Festival.  Had I seen it at Palm Springs, I probably would have given it a much harsher review than I do today.

That’s because the film’s premise — the spouses of the military sent to fight for Britain in Afghanistan find they have nothing to do but wait for bad news, so they gather together to form an all-female choir, despite the questionable singing talent of many of the women involved — seems to have a deeper resonance in this era of masks and social distancing as we find ourselves also waiting for further bad news.

True, “Military Wives” displays a bit of lazy writing with predictable plot twists at every turn, but what would have come off as cliched in January seems strangely comforting in May, like a well-cooked meat loaf that’s hardly gourmet dining but is satisfying specifically because it reminds one of home.

When their spouses are deployed to the war, the women left behind are led by Lisa (“Catastrophe’s” Sharon Horgan), whose job it is to raise the morale by engaging the remaining wives on the base in a joint activity to keep their minds occupied.  This social leading is not Lisa’s strong suit, and the group’s initial attempt at forming a knitting circle is a wine-soaked flop. When the idea of a singing group is raised, Kate (Kristin Scott Thomas), wife of the base’s ranking officer, offers to lend her help, but as she is a bit of a control freak, her strict way of doing things (that is, her way) prompts a rebellion among the other women, who respond more positively to the pop music orientation of Lisa.

As rehearsals proceed, we gradually come to know each member of the choir a little at a time, and those character revelations generally follow a path that’s pretty familiar:  there’s the shy young women who has — surprise! — a gorgeous singing voice, as well as the supremely confident member who’s completely unaware that she can’t sing a lick but is given a moment to shine anyway.

The only plot point that is truly hard to swallow is their almost immediate leap from being amateur singers to becoming decent to being offered a spot on the bill at the prestigious concert for Remembrance Day being telecast live from the Royal Albert Hall in what seems like no time.  As contrived as the set-up sounds, the concert does provide the audience for “Military Wives” the emotionally-satisfying ending we’ve all been craving all along.

Scott Thomas can do the stiff-upper-lip Brit in her sleep, but happily, she gives far more than that here.  Horgan is a bigger star in the UK than here, but if you had ever seen her in Amazon’s whacked-out British comedy “Catastrophe,” you’ll appreciate how having to play an ordinary housewife is a real stretch for her.

In the Afghanistan era in which the film is set, the idea of a military wives choir was unheard of.  Today there are more than 75 choirs made up of military wives, and the original choir, depicted here, even had a Christmas #1 song (“Wherever You Are”) in Britain in 2011.  There was apparently a lot more to these women than even they may have originally thought.

“Military Wives” is available to stream on Hulu and to rent or buy on Amazon, Apple TV and other streaming platforms and pay-TV operators.