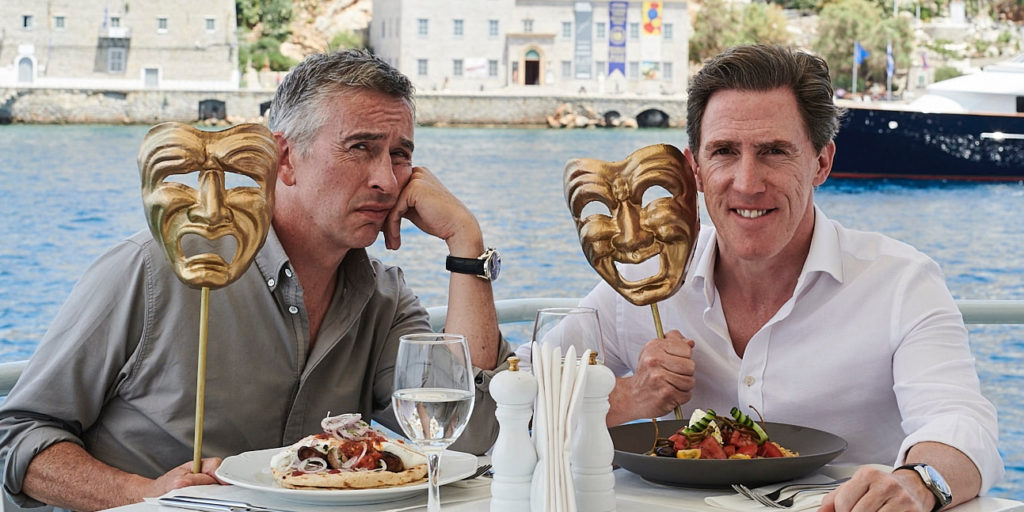 ​​The “Trip” series of films originated in 2010 as a British sitcom airing on BBC Two with a premise that actor Steve Coogan is asked by a noted British newspaper to take a restaurant tour through Northern England and write about it. As a traveling companion, he selects his friend, entertainer Rob Brydon, and, as they tour the countryside together, they indulge in gorgeously-photographed food, followed by a lively round of bickering. The show was eventually reworked by director Michael Winterbottom into a 2011 feature film, which was a hit not only in the UK but in American art houses as well, a success that prompted a second trip (2014’s “The Trip to Italy”) and a third (2017’s “The Trip to Spain”).

Now Winterbottom has gathered the gang back together for what is labeled their final go-round, “The Trip to Greece,” which will be available on streaming services on Friday. The set-up remains the same — Steve has to write a culinary article. The companion is the same — the inevitable Rob. But the country and culture are different, and therein is what makes “The Trip to Greece” usually something more than the same-old, same-old. The hook for the article is that Steve is supposed to follow in the footsteps of the 10-year trek of Odysseus in “The Odyssey” in only six days, which sounds intimidating. But then Odysseus didn’t have to contend with the likes of Rob Brydon by his side. Winterbottom begins the film inland, such as at the ruins of Delphi in keeping with Steve’s classical assignment, but the film itself doesn’t really open up until it hits the country’s stunning seaside villages. It is there where Steve and Rob really hit their stride and meet their regular photographic crew, one of whom, Yolanda (Marta Barrio), resumes her on-again, off-again affair with Steve.

What fans of the “Trip” films await eagerly is the back-and-forth between Steve and Rob at mealtime, particularly their dueling celebrity impressions, and in that arena, “The Trip to Greece” does not disappoint. While there are a few familiar impersonations, such as Mick Jagger and Dustin Hoffman, the pair, as usual, throw in a few curveballs, such as tough-guy British actor Ray Winstone as Henry VIII relishing just how he plans to decapitate Anne Boleyn, as well as my favorite, a Laurel and Hardy riff, in which Coogan’s acclaimed Stan Laurel (from 2018’s “Stan and Ollie”) standing up to a very different Hardy — Rob’s Tom Hardy as Bane (“I can’t hear what you’re saying, Tom. You’re always mumbling your lines.”)

“The Trip to Greece” does hit a few speed bumps along the way — there’s an extended sequence, for example, where Steve drops off a former co-star who is living in a refugee camp, but we never see the camp nor meet the refugees, so there’s not much point in this time-waster. While none of the various phone calls in “The Trip To Greece” are as dramatic as in past trips, one that comes in the daytime shakes Steve to his core and forever alters the direction of the trip.

As fun as “The Trip to Greece” is (and at times, it’s laugh-out-loud funny), there is a feeling of predictability beginning to seep into the proceedings that drains “The Trip to Greece” of much of its potential freshness. If you’ve seen any of the previous “Trips,” you can anticipate almost every beat. Here’s the first gorgeous meal, then the first impressions duel, then the first call home, then the photographers show up. And on and on. If you’ve never seen a “Trip” film before, this will all be fresh to you, so enjoy it! If you’re a “Trip” veteran, you might view the familiarity as cinematic comfort food, or you may feel like you’ve been there, done that. If indeed “The Trip to Greece” is the final film in the series, it will go out on a fine note. But I have just one request. If you’re really serious about presenting us with fine food, please consider a fifth film — “The Trip to France.” Please!!

This review originally appeared on Next Best Picture.

Now Playing in Your Living Room: If “Military Wives” Was Dinner, It Would Be a Comforting Meat Loaf