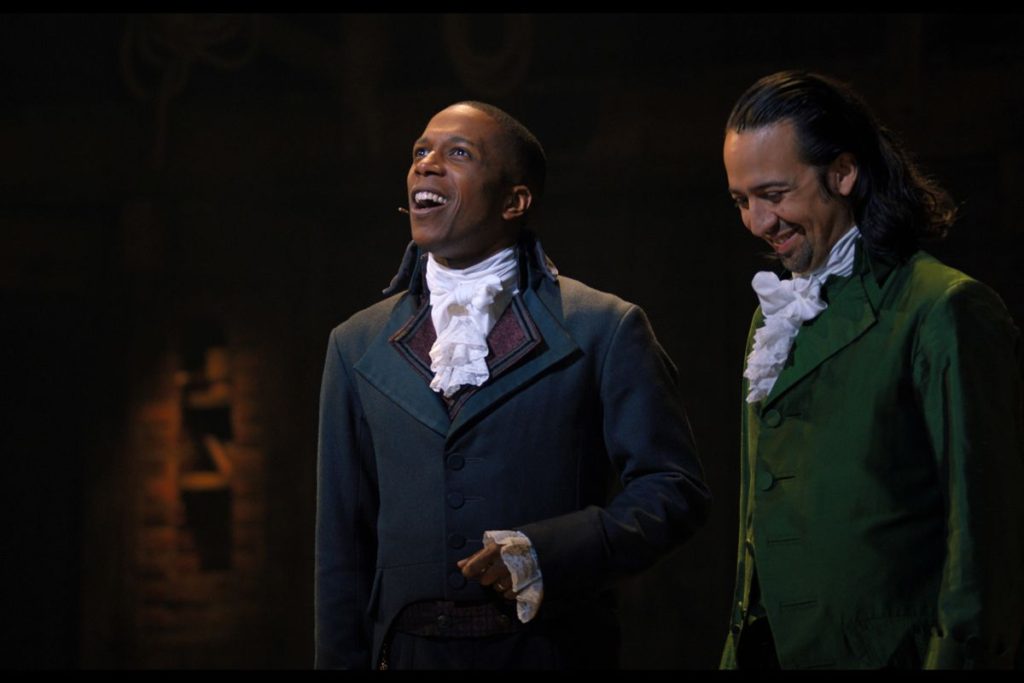 Forget July 4th weekend. For much of the United States, these past three days has been “Hamilton” weekend, as a filmed performance of the ground-breaking musical premiered on the streaming service Disney+ on July 3.  Originally scheduled to premiere in theaters on October 15, 2021, “Hamilton” was pushed up by Disney and Lin Manuel Miranda to take advantage of home-bound viewers during the pandemic, and the response was enormous.  Besides being the talk of social media, “Hamilton” prompted downloads of the Disney+ app 752,451 times globally, including 458,796 times in the U.S, way above average.

The “Hamilton” film was actually a combination of two live performances with an audience at New York’s Richard Rodgers Theater in June, 2016 plus an extra day to film close-ups. The result is the most extraordinary film of a stage performance that I have ever seen.  Director Thomas Kail, who won one of the play’s 11 Tonys for his work, demonstrates that he is equally adept in film.  Knowing the text inside out probably helps, but Kail has the uncanny knack of placing his camera in just the right position for that moment, whether it’s a close-up, a mid shot or a wide shot that can capture the entire stage.

As for the themes of “Hamilton” and how the show’s performances fit into them, I’ve attached at the bottom of this piece my original review of the show, dated September 30, 2015, all of which I still stand behind.  As for the performances in the film, they’ve only deepened from when a saw the show nine months before this filming.  All of the show’s big personalities (Miranda as Hamilton, Leslie Odom Jr. as Aaron Burr and Renée Elise Goldsberry as Angelica Schuyler) remain as effective as ever, but the use of close-ups particularly helps Phillipa Soo as Hamilton’s wife Eliza.  Soo is doing delicate work in the role that sometimes can’t be detected by theatergoers in the 20th row, but in close-up and some mid-shots, you can see how she is building her character through glances, gestures and movement.  The film reveals this wonderful performance that I now rank as among the best in the show.

When I first saw “Hamilton” on that bright September day in 2015, it was in the midst of an upbeat political atmosphere, and the show somehow seemed to be an extension of the hope, joy and sense of possibility that seemed to pervade the country at that time.  Seeing it again now, I was struck how now “Hamilton” seems less of a celebration and serves as more of a life preserver, something that we can cling to in order to keep the optimism about this country that we so miss in our lives, as if to say “See what we were and what we can be again?” Thank God this remarkable piece of art has been preserved on film so that we can return to it whenever we need it.  And we many need it several more times before Election Day.

Below are my much sunnier thoughts from 2015: 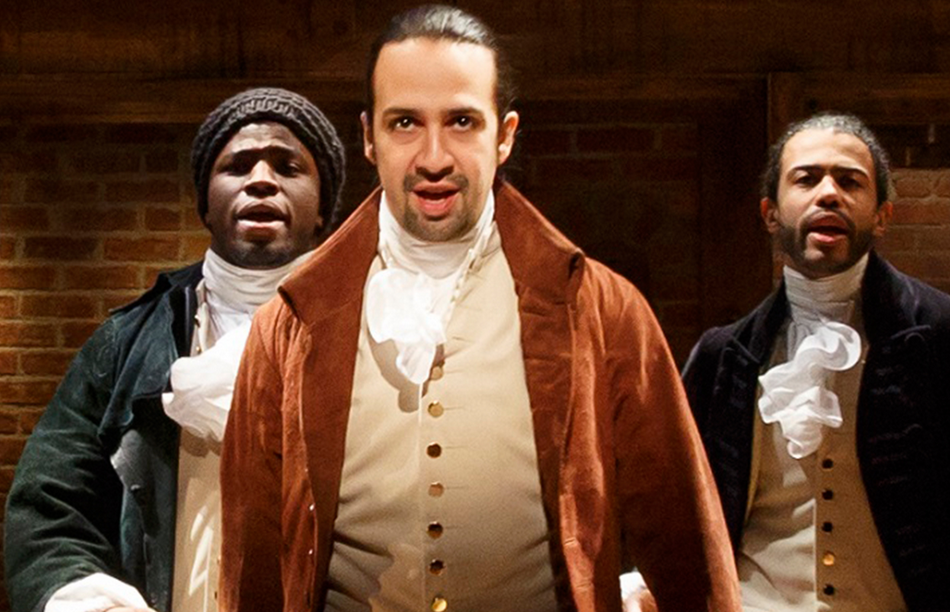 When I first heard about the premise of “Hamilton,” it sounded like something the satirical newspaper The Onion would create if The Onion had a theater critic.

“The hottest Broadway show in years will be a musical based on a scholarly biography of the first Treasury Secretary of the United States.  It will be performed almost entirely by a cast of actors of color who will be costumed in ruffled shirts, knee breeches and hoop skirts.  The score will use the language of R&B, rap and hip-hop.  And you’ll be lucky if you can score a ticket for $1500.”

Welcome to Broadway in September 2015.  Welcome to “Hamilton.”

How could this possibly have happened?  The origins of this project are one of the oddest in recent Broadway memory.  Lin-Manuel Miranda, the genius behind “Hamilton” (and I can say genius because he was awarded the MacArthur Genius Grant on Monday for his work), was on vacation from starring in the Tony Award-winning musical he created called “In the Heights” when he picked up Ron Chernow’s acclaimed biography of Alexander Hamilton.  (Not my idea of a beach book, but to each his own.)

Miranda noodled around with idea of turning the biography into a hip-hop musical which he then called “The Hamilton Mixtapes.”  In 2009, he was asked to appear at the White House, and he performed what would become the musical’s opening number, “Alexander Hamilton,” which distilled a huge chunk of Chernow’s story of Hamilton’s early years into a single song.  Encouraged by the response, he expanded the idea into a full musical, which was workshopped at a reading at Vassar in 2013.

That workshop led to a limited engagement this spring at New York’s Public Theater, where the show soon became a sensation, attracting patrons as diverse as Michelle Obama and Dick Cheney.  When the downtown run ended in early May, there was enormous pressure on Miranda to move it uptown quickly to qualify for the 2015 Tony Awards.  But Miranda resisted, choosing to tweak the show based on what he learned in its downtown run.  He was proven right.  “Hamilton” finally opened on August 6 to rave reviews — influential New York Times critic Ben Brantley, who liked the Broadway version even better, said

“I am loath to tell people to mortgage their houses and lease their children to acquire tickets to a hit Broadway show.  But ‘Hamilton’…might just about be worth it.”

[For the record, Exact Change Today already has a mortgage and has no children to lease.  But I got my tickets in April before the scalpers moved in.]

Enough about the history.  Let’s get to the show.  As the lights went down, I wanted to love it, but I was skeptical — the show can’t be that good.  I was impressed by the “Alexander Hamilton” opening, as well as one of the show’s signature songs, “My Shot.”  But “impressed” is not “loved.”

It was not until midway through Act 1 when Hamilton (Miranda) marries Eliza Schuyler, one of the socially-prominent Schuyler sisters, that something clicked.  Eliza (a wonderful Phillipa Soo) was first introduced to Hamilton by her sister Angelica (the brilliant Renée Elise Goldsberry), and in the song “Satisfied,” a regretful Angelica rewinds history to pinpoint the moment where she could have had Hamilton (whom she secretly loved) for her own instead of helping her sister.  The imaginative way the rewind is created and staged led me to think “I have never seen this in a theater before.”  And “impressed” immediately became “loved.”

That love continued throughout the rest of the show, culminating in one of the most sustained standing ovations I’ve ever experienced in a theater.  I went in a skeptic and came out a believer.

Director Thomas Kail’s staging is simple and effective, but “Hamilton” is the creation of Miranda, who stars and wrote the book, music and lyrics, a remarkable achievement.  But both men are backed up by an ensemble that is impeccable.  Among the standouts are Leslie Odom Jr. who creates an Aaron Burr who is both sympathetic and complex, Jonathan Groff whose effete King George makes condescension hilarious, and Daveed Diggs. who doubles as a knit-capped Marquis de Lafayette in Act 1 and portrays Act 2’s wild-haired Thomas Jefferson in the manner of Andre 3000 from Outkast.  Look for these three to duke it out for the Supporting Actor Tony next year.

Will “Hamilton” be the musical landmark that many have claimed?  Time will tell, but I suspect the answer will be “yes.”  Don’t mortgage your house or lease your kids, but by all means, see “Hamilton.”

Now Playing in Your Living Room: Catherine Deneuve, Juliette Binoche and Ethan Hawke Never Quite Know What’s a Lie in “The Truth”