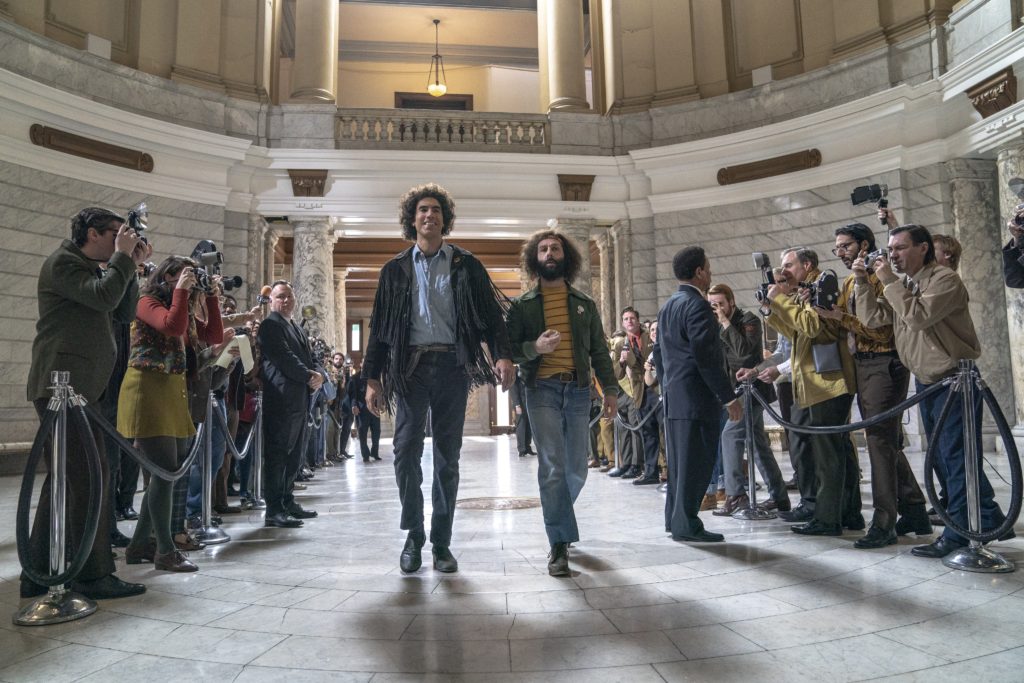 Even though the the cupboard has been pretty bare for those movie theaters that are currently open, it’s still a hot weekend for movies as film festivals across the country unveil a number of new titles that are likely to figure heavily in the Oscar race.  For those of us who can’t attend a festival, however, there’s plenty of compensation in the form of the latest works by three major directors — Aaron Sorkin (“Molly’s Game”), Marielle Heller (“A Beautiful Day in the Neighborhood”) and Spike Lee (“Da 5 Bloods”) — that will make their premieres this weekend on various streaming services.  And we’ll cover them all.

First up: Aaron Sorkin’s “The Trial of the Chicago 7,” currently streaming on Netflix.

As the trial begins, Judge Julius Hoffman (Langella) takes umbrage at the long hair of the defendants’ lawyer William Kunstler (Rylance) and even more offense at Seale’s vociferous insistence that he have another lawyer, a request of Judge Hoffman that results in Seale being bound and gagged in front of the jury.  Eventually, Seale is severed from the trial, so the Conspiracy 8 became the Chicago 7.

At this point, the film divides its interests between what’s going on behind the scenes among the 7 and the trial itself.  Behind the scenes, the most fun is between the jousting between the by-the-book Hayden and the jokester Hoffman. (This explains why the casting of Baron Cohen makes sense.)  Abbie seems to have no boundaries, such as when the defendants are first introduced.  When Judge Hoffman makes a point of saying “He is not my son,” Abbie responds with a plaintive “Dad, dad, why have you forsaken me?”

Sorkin’s direction is fine, certainly a step up from his debut film, 2017’s “Molly’s Game,” but as you might expect, the key to why “Chicago 7” works is his script.  Yes, there are a few passages that are too on-the-nose, but as with most of Sorkin’s walk-and-talk work, there are beautiful pearls of dialogue that will make you sit up and take notice.  Sorkin has always been interested in works about justice, from his Globe-nominated script for “A Few Good Men” to his recent Broadway rethinking of Harper Lee’s “To Kill a Mockingbird.” Still, it is his work with these actors that you might find yourself remembering most from “Chicago 7.”

At this point, I would normally deliver a verdict as who is best-in-show, but this cast is so dynamic that it’s tough to make a selection.  In fact, on paper, it could be possible that “Chicago 7” could take up all five slots for Best Supporting Actor.  Among the defendant characters, Baron Cohen is a standout, although Abdul-Maheen’s intense work helps to lend gravitas to the piece.

Still, not surprisingly, it’s the two celebrated Broadway actors that really stand out from this award-winning crowd.  With enormously big personalities among his clients, Rylance’s Kunstler tends to underplay as a calming force in the defendants’ meetings, but instead of seeing Kunstler as somehow passive, Rylance’s quiet approach successfully brings us even closer to his character.

Then there’s Judge Julius Hoffman.  Langella plays the judge as an absolutely repulsive human being, which means, of course, that he’s an absolutely wonderful movie character.  Like Nurse Ratched in “Cuckoo’s Nest,” there’s no apparent humanity to his actions, so that every time he appears, he brings the film to life every time the judge distorts justice to his own prejudices. It’s a delicious performance, one of Langella’s best.  Among the likely award nominations for this cast, I suspect that Rylance and Langella would be at the head of the field, with Abdul-Maheen coming up on the outside.  But that’s how rich this cast is.

If there’s a weakness in the structure of the script, it’s the sidelining of the characters of defendants Davis, Froines, Weiner and even Dellinger (and the potential breakout performances of their talented portrayers) that keeps the portrait of the team from being quite complete.

Still, “The Trial of the Chicago 7” is one of the first major films of the fall season, and thankfully you can see it at home from your easy chair. Enjoy.

Now Playing In Your Living Room: “The Boys in the Band” Is Still Not A Musical