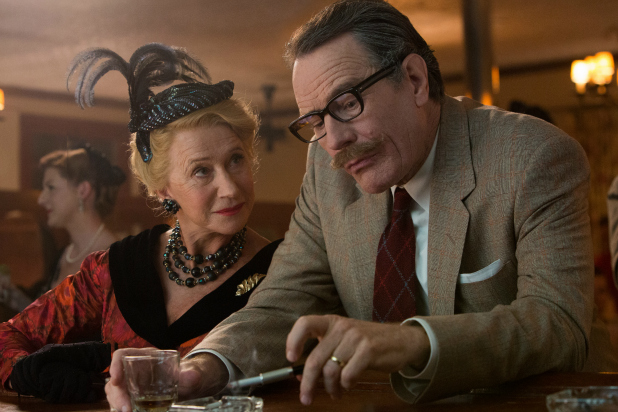 The Hollywood blacklist remains to this day one of the most shameful eras in American history.  So many creative artists were unable to work in the industry again because they were suspected of having ties to the Communist Party, and each of their stories could be dramatized as a national tragedy.  One of the most high-profile victims of the purge, writer Dalton Trumbo, was especially pilloried for his unrepentant adherence to his Party membership.  With all of the tragic blacklist stories out there then, why is Jay Roach’s biopic “Trumbo” so damned entertaining?

Certainly Dalton Trumbo was no everyday Joe, and, as played by Bryan Cranston, he let everyone around him know it.  We first meet him as the highest-paid screenwriter in Hollywood at the very top of his game, despite the growing cloud of suspicion over his head.  Trumbo was a paradox, espousing the rights of the workers while still cashing a fat Hollywood paycheck.  As his friend, writer Arlen Hird (comic Louis C.K., in an effective dramatic turn) observes, “You talk like a radical, but you live like a rich guy.”  Still, Trumbo refuses to temper his pro-worker talk, which soon comes to the attention of the powerful right-wing gossip columnist Hedda Hopper (Helen Mirren).

Hopper enlists the aid of staunch anti-Communist John Wayne (David James Elliott) to shine a light on the views of Trumbo, Hird and their left-wing writer friends, who would soon become known as The Hollywood Ten.  When called before HUAC, Trumbo refuses to answer their questions and winds up serving a stretch in prison.  Once released, he finds that he has been blackballed by the Hollywood studios and that his career is effectively over.

Up until this point, “Trumbo” appears to be a standard Hollywood biopic.  Here’s where Roach and McNamara cannily come in.  With their hero at rock bottom, they fashion the actual events into a real-life “Rocky” comeback story for the Hollywood left.  They have everything — a flamboyant boogiewoman (Mirren), a schlockmeister D-movie producer (John Goodman) complete with baseball bat, dear friend Edward G. Robinson (Michael Stuhlbarg) who must betray his pal to save his career, and conquering heroes Kirk Douglas (Dean O’Gorman) and Otto Preminger (a hilarious Christian Berkel).

Is it disrespectful to utilize the blacklist as part of an entertainment?  Perhaps.  But the political lessons here are strongly communicated, and a spoonful of sugar can help them go down easier.

For those who are expecting Cranston to deliver a period version of “Breaking Bad’s” Walter White, park that expectation at the door.  His is a big performance, certainly, but it’s not a hammy one — Cranston delivers a very measured portrayal of a very hammy character, and therein lies his effectiveness.  With her wild hats and total condescension, Mirren is clearly having a Cruella-like blast in a performance that will likely gather her another Oscar nomination.  And as Trumbo’s long-suffering family, Diane Lane as his wife Cleo and Elle Fanning as daughter Nikola are particularly good in expressing the love and frustration that are taking a toll on Trumbo’s family life.

The actors portraying movie stars here have a particularly difficult job in creating characters that echo, but are not a slavish imitation of, such well-known personalities.  Roach was very smart in casting such accomplished but not widely-known character actors as Stuhlbarg, Elliott, O’Gorman and Berkel, avoiding the trap that Lee Daniels fell into when he cast big stars, such as Robin Williams (???) as Dwight Eisenhower in “The Butler.”

I will grant you that McNamara’s script isn’t perfect — the mood swings from tragedy to big laughs can sometimes be jarring — but he moves the action along and layers back the characters effectively.  But Roach, who’s primarily known for his comedy films, lands most of the film’s big dramatic moments — I’m thinking in particular of Mirren’s final silent scene, which is just devastating.

If you’re hesitating seeing “Trumbo” for fear it might be like homework, don’t worry.  Yes, there’s lots of lessons to be learned here.  But there’s also a lot of fun, like recess.

After 22 Seasons, “The Soup” Comes to a Close — A Personal Remembrance