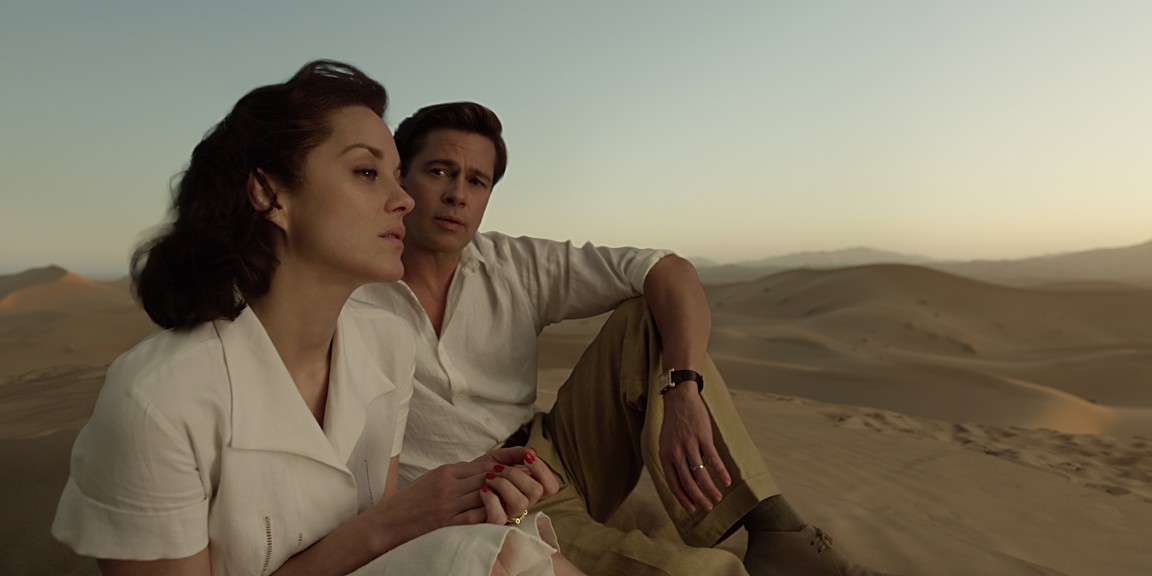 “Allied” opens with a spectacular overhead shot of a sand dune in the Sahara Desert.  Suddenly, two legs move into frame, and we watch as a lone man slowly descends via parachute onto the desert floor.  He is quickly given his instructions and his character which he will soon have to convincingly portray when he reaches his destination.  The man is Max Vatan (Brad Pitt), a Canadian spy who is assigned to meet up with French Resistance fighter Marianne Beausejour (Marion Cotillard) when he gets into town.  And the town?  Casablanca in 1942.  And so begins “Allied.”

The Robert Zemeckis-directed film opened in theaters at Thanksgiving and was met with mixed reviews and mediocre box office.  But I must say that the first half of “Allied” was some of the most fun I’ve had at the movies all year.  The second half?  Well, we’ll get to that.

Marianne, who has been in Casablanca for some time earning the trust of the German hierarchy in town, greets Max (whom she has never met) as her long-lost Parisian husband in front of her German dinner guests.  Max plays along as best he can, but he is clearly not up to speed yet on their assignment.

Marianne fills him in — their mission is to convince the Germans that they are a believably married couple, whose power merits an invitation to an upcoming Nazi party, which will be filled the German ambassador as well as with top-ranking Nazi brass, whom they will proceed to assassinate.

However, Max, who is used to being in charge, is taken aback when Marianne starts running the show.  Max’s French is OK, she observes, but he sounds like a Canadian rather than a Parisian, which he will have to fix in order for his character to be believable.  Second, he will have to learn to how real married couples behave for this scheme to work, and finally, most importantly, do not fall in love with each other.

How long do you think it takes for them to break Rule #3?

Zemeckis has a ball building the suspense (based on a fine script by Steven Wright), helped in no small way by two all-stars on his team — first, Gary Freeman, whose sets and production design masterfully evoke the Hollywood Casablanca of Humphrey Bogart, and second, Joanna Johnston whose costume designs are (there’s no other word for it) fabulous.  The linens and hats for Casablanca day-wear are gorgeously designed, but it is the film’s evening wear that will cause your jaw to drop — impeccably tailored tuxedos and dinner jackets for Pitt, and clingy big-shouldered gowns for Cotillard that so evoke the movies of the period.  (If Johnston doesn’t get an Oscar nomination for her work here, I’m going to be pissed.)

But to really evoke the period, you need real movie stars who know how to be larger than life, yet still make you really care about their fate.  Pitt is a little more dour here than usual, but it’s a smart call to better prepare us for the events of the film’s second half.  And Cotillard is an absolute hoot, whether it’s sweeping into a room in a glamorous gown or mowing down Nazis with a machine gun.  Though some critics have questioned whether there’s chemistry between Pitt and Cotillard, I bought them as a couple hook, line and sinker.

Speaking of the film’s second half, though, we leave the warm fun of the Casablanca scenes and retreat to the chilly espionage world in England, where the film takes a decided left turn.  Now a couple, Max and Marianne lead a pleasant domestic life in a London suburb until Max is contacted by Allied Special Operations who tell him that they have reason to believe that Marianne is actually a German spy (no spoiler — it’s in the trailer), and it’s up to Max to put her to the test.

It’s not that the second half is bad — in fact, it’s quite well made — but with Cotillard missing from the film much of the time, that romantic sparkle from Casablanca fades, and we are left with Pitt moving from one new character to another in order to clear his wife’s name.  Certainly, there’s suspense built into the premise — is she a spy or is she innocent? —  and by the time we reach the climax, some of the thrills of the first half have returned to make for a satisfying finale.

Ignore those wet-blanket critics who pooh-poohed “Allied.” If you’re a hopeless romantic as I am, you owe it to yourself to give it a shot.