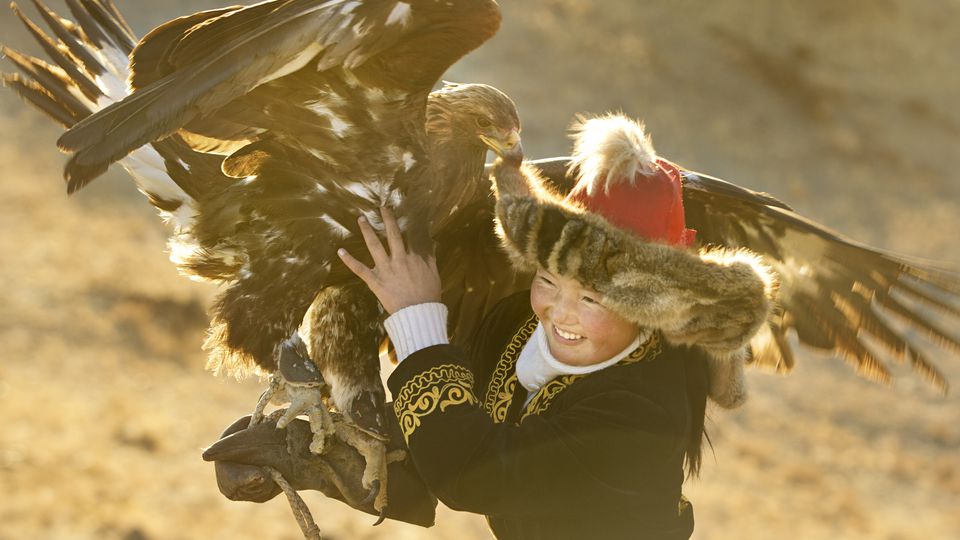 Who would have thought that one of the hottest documentaries of the year would center on a Mongolian teenage girl who wants to break into the all-male world of eagle hunting?

The new G-rated documentary “The Eagle Huntress,” which was named on Tuesday as one of the 15 semi-finalists for this year’s Best Documentary Oscar,  takes place in a remote area of Mongolia where nomads rely on eagles to hunt foxes that provide the nomads with fur for warmth and food for the eagles. Eagle hunting is a skill that is traditionally passed down from father to son — it’s a tradition reserved only for males — and one of the top eagle hunters in the area is Rhys Nurgaiv, a champion hunter following in the footsteps of his own renowned father.

Even though Rhys has been taking his 13-year-old daughter Aisholpan along with him on hunts for years, he is surprised one day when she tells him that she wants to become an eagle hunter herself.  For the elder eagle hunters in the tribe, the idea of a girl wanting to take up the hunt is unheard of.  Nonetheless, Rhys supports his daughter’s dreams and Rhys agrees to teach Aisholpan the skills to become a great eagle hunter.

Director Otto Bell has neatly structured “The Eagle Huntress” into three parts.  The first is the training itself which, except for a few early stumbles, Aisholpan aces.  The second is the great local eagle festival, where hunters from all over the region compete to determine the best eagle hunter.  Finally Aisholpan then must go out to the frigid steppes and lead her eagle to capture so that she can be considered a true eagle hunter.  All this, accompanied by sweeping drone photography and a lavish musical score.

Which is exactly what’s wrong with “The Eagle Huntress.”

Now please understand that mine is a minority opinion — “The Eagle Huntress” is one of the most favorably-reviewed films now in release with 94% positive reviews according to the website Rotten Tomatoes.  But much of the film felt staged to me, not only in the picture-perfect cinematography or rousing score, but often in the words that people onscreen are saying.  For example, there are montages of the village elders speaking about why women can’t be eagle hunters in words that are both ridiculous (one elder complains that the temperature would be too cold for women), yet are incredibly well-written (highly suspicious given the look of these octogenarians).

Usually in fictional “rebellious teen” movies, there’s some conflict within the family about the teen following her own path — often Mom is secretly supportive while Dad blows his stack with some kind of “No daughter of mine…” kind of speech.  It’s contrived, of course, but it would be at least some kind of conflict.  Here, however, everyone’s on board from the start, even those around them (except of course for those cranky elders).  Aisholpan appears to do well with everything she tries, so where’s the suspense?  We’re happy that she’s doing so well at living her dream, but after a while, there’s precious little at stake for us to truly care.

So that leaves us time to wander around the edges of the film and think about other things — “did they use a drone to get that shot?” or “why does the transistor radio station only play news of the eagle festival?” or “do nomads really use the word ‘awesome’?”

That being said, there are some terrific elements to “The Eagle Huntress,” particularly a lengthy segment during the training portion where Rhys, who thinks it’s time for Aisholpan to have her own eagle, takes her to a mountain cliff-side and lowers her by rope to a landing where she poaches a baby eaglet from its nest.  Morality aside, it’s a breathtakingly shot sequence.  And it’s refreshing to see such a deeply-felt bond between father and daughter play out on the screen.

“The Eagle Huntress” is one of those documentaries that would have been a lot better off with a little more dirt under its fingernails.  As it plays now, it feels more like a Hollywood spectacle than anchallening struggle to follow one’s dream, and even though Aisholpan is now a movie star, don’t introduce her to us that way.  Let us the audience discover her, and I know that I would have invested a lot more in her journey.

Hailee Steinfeld Shines in the Unexpectedly Wonderful “The Edge of Seventeen”