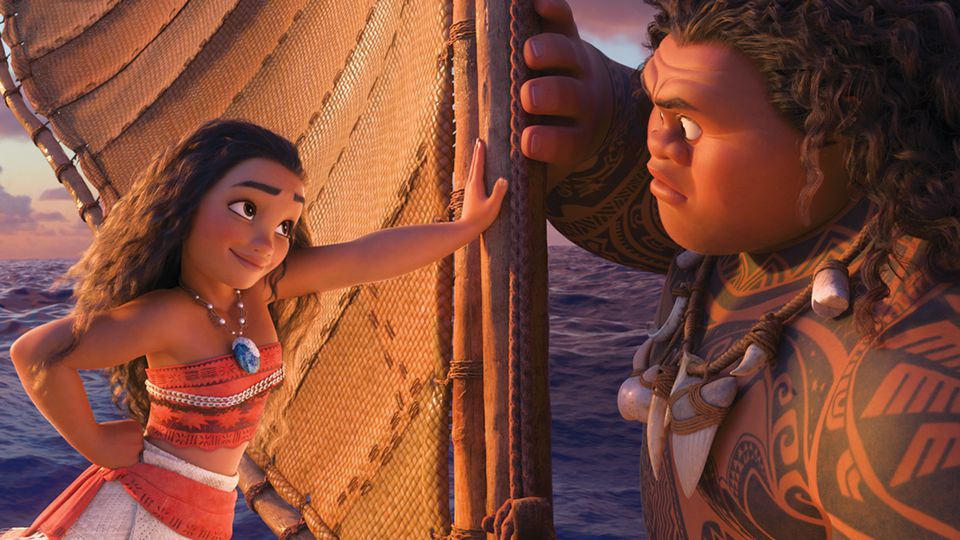 When it comes to winning the Oscar for Best Animated Feature, Pixar films have pretty much owned the category over the past decade, winning six times in the past ten years, leaving its stablemate Walt Disney Animation usually in the role of perennial bridesmaid [although they did nab the golden trophy for “Frozen” (2013) and “Big Hero 6” (2014)].

For most of the year, it appeared that this year’s Animated Feature Oscar would again go to Walt Disney Animation for its acclaimed spring release “Zootopia,” a sly satire of racial relations told from the point of view of animals.  But there is a new Disney pony in the race, and she’s coming up fast on the outside — “Moana,” a splashy Polynesian-themed musical, whose leading characters are voiced by a high-school freshman and a former WWE superstar.

Helmed by the Disney directing team of Ron Clements & John Musker, who first kicked off the Disney musical renaissance 27 years ago with “The Little Mermaid,” and written by Jared Bush (from a story by seven other writers, which is rarely a good sign), “Moana” proves to be the happy exception to that rule, for whatever those extra writers contributed, the result is a funny and meaningful script that’s culturally sensitive to boot.

“Moana” is one of those scripts that are very easy to follow once the story begins but whose backstory is crazy complicated.  As a public service, here’s what went down before the movie starts:

Once upon a time, a Polynesian island goddess named Te Fiti possessed a big heart with the power to create life.  That heart manifested itself as a stone, but the stone was stolen by demigod Maui (Dwayne Johnson) who intends to give the heart’s power to all mankind.  Maui is soon confronted by the lava god Te Kā, and in the melee, the heart falls away into the ocean and is lost.

1000 years later (here’s where we pick up the story) on the nearby island of Motunui, a young girl named Moana (Auli’i Cravalho), who is drawn to the ocean thanks to the encouragement of her wise grandmother Tala (Rachel House), is one day selected by the ocean to retrieve the missing heart.  (What’s in it for the ocean is beyond me, but we move on.)  Looking like the big watery finger in James Cameron’s “The Abyss,” the ocean gives Moana a tantalizing glimpse of the heart, then submerges it again.

Motunui is protected by a reef, beyond which Moana has been forbidden to travel by her overprotective father Tui Waialiki (Temuera Morrison), the village chief, who lost his best friend when they attempted to sail beyond it years ago.  When the island is suddenly beset by misfortunes — a dwindling number of edible fish, coconuts that have become rotten, and plant-life dying — Moana again begs her father, the tribe’s chief, for permission to sail off to get more fish, but he is adamant in his refusal.

But with her dying breath, Tala presents Moana with the actual missing heart of Te Fiti which she has saved for years for Moana, and she begs her granddaughter to sail beyond the reef and persuade Maui to return the heart to Te Fiti so that all will be well again.

Moana finally locates Maui on a remote island, but instead of being a fearsome villain, he turns out to be a raging egomaniac only anxious to get his demigod reputation back.  He hijacks Moana’s boat, but ever-resourceful, she catches up to him, and even though Maui repeatedly throws her off the boat, the ocean creates a wave that deposits her back on deck again.  So the two reluctantly decide to work together, albeit for very different reasons.

If all this sounds familiar, it is — there’s the quest and the journey, spunky young heroine, animal for comic relief (here it’s a chicken who is so obnoxious, I wanted to fricassee it on the spot) — but somehow whether it’s the gorgeous animation, sparkling writing or exotic location, “Moana” still comes across as fresh.  There’s even a argument between Moana and Maui as to whether she’s a princess (a sly reference to the ongoing controversy as to whether Disney princesses are good role models for little girls) that’s a bit meta but cleverly written still.

As directors, Clements & Musker demonstrate that they’ve haven’t lost anything since “The Little Mermaid,” and their animation of the ocean here is simply breathtaking.  And their cleverness continues even on the music side — in one of Maui’s big numbers, “You’re Welcome,” they have the great idea of placing Maui and Moana against crudely drawn animation so that both characters look human by comparison.  Great stuff.

As Moana, Cravalho delivers a strong piece of voice work, remarkable as she was only 14 years old when she was cast.  In fact, the voices are strong across the board, particularly Jermaine Clement as a David Bowie-like crab who’s hilarious.  But the big question about the film’s cast surrounds Dwayne Johnson as Maui — “Is he good in the picture?” and “Can he sing?” — to which the answers are “Yes” and “Good enough.”  In fact, how he plays Maui is not unlike how he played the braggart The Rock in his early pro wrestling career.  Thinking about it, I’m not sure that there would be anyone better in voicing this role.

The other big celebrity question mark involving “Moana” is the participation of Lin-Manuel Miranda, the Tony- and Pulitzer-Prize winning creator of the Broadway musical “Hamilton.”  Miranda, along with Pacific musician Opetaia Foa’i and Hollywood composer Mark Mancina, collaborated on the songs for the “Moana” which blend together beautifully, and with Miranda’s skill in writing for the stage is present in every song, to my mind, “Moana” has the best Broadway soundtrack of a Disney film since “Aladdin.”

The pacing of the film is a bit spotty — the film starts strong, but Moana & Maui’s time in the boat gets a little repetitive and could be trimmed to better effect.  But there’s a joy to “Moana” that’s been missing from many 2016 films, and that alone is worth supporting.