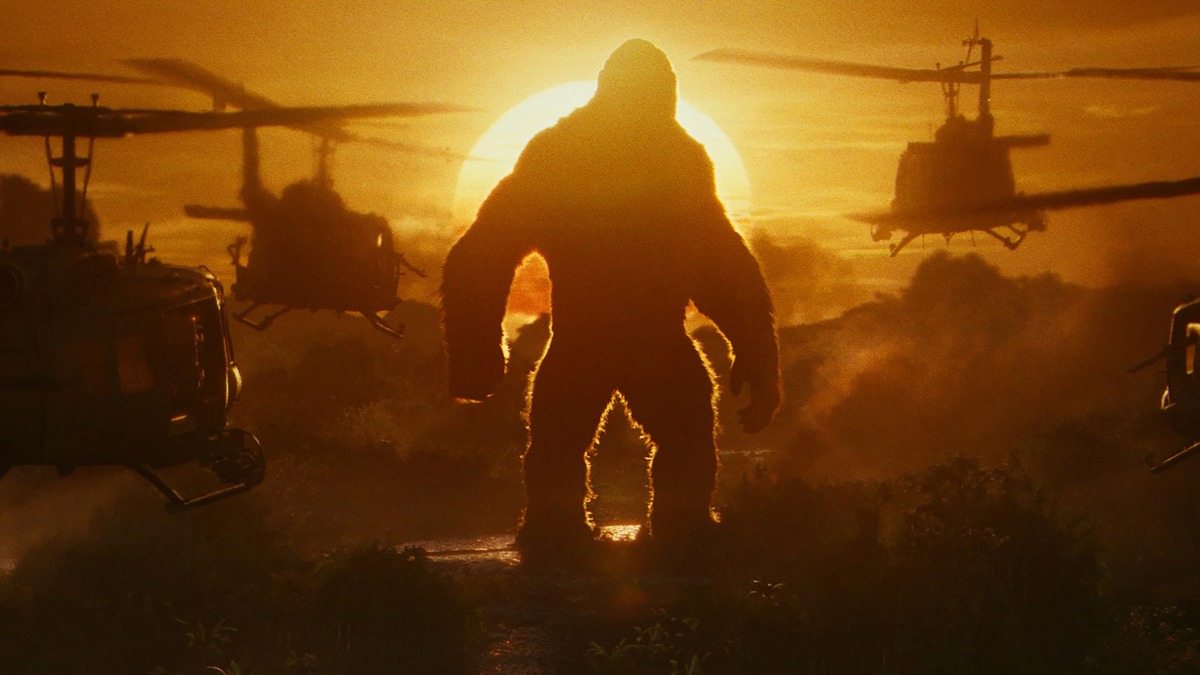 It would be completely understandable if you thought that someone photoshopped an image of King Kong and plunked it into the poster for Francis Ford Coppola’s “Apocalypse Now.”  But no, the above still is an actual image shot for the latest Kong incarnation, “Kong: Skull Island,” directed by Jordan Vogt-Roberts, and if you think that image is just meaningless fun, you may be surprised at what “Kong: Skull Island” is up to.

The third remake of the 1933 “King Kong” — the others were made in 1976 (marking the screen debut of Jessica Lange) and again in 2005 with Peter Jackson’s version, which was his first film after “The Lord of the Rings” trilogy — “Kong: Skull Island” is set in 1973 in Southeast Asia just as the Vietnam War was beginning to wind down.  The set-ups to each film are similar even though they are set in different decades.  However, the third act of the original and first two sequels, where Kong is captured and brought back to Manhattan to be presented on Broadway (boy, I would have loved to have seen the Tony Awards that year!), has been dropped and probably for the best.

Here’s something I never thought I would say — “Kong: Skull Island” has a great beat and you can dance to it.  It’s wall-to-wall ’70s music, with lots of Creedence, Black Sabbath, The Hollies etc., which gives the film a nostalgic beat from the get-go and puts a smile on your face, which helps to make you open to all of the nonsense that will soon be coming your way.

The action is driven by Bill Randa (John Goodman), a government official who seeks funding for an expedition to an uncharted desert island presumably to find a cure for cancer but really to find monsters.  And, oh boy, does he find them.  Randa and his team are given a military escort by a chopper fleet commanded by Lt. Col. Preston Packard (Samuel L. Jackson), and is Sam ever pissed that our side is losing the Vietnam War.  Randa, in need of a tracker, hires the hottest-looking mercenary he can find (Tom Hiddleston, in full hero mode) and an (anti-) war photographer (Brie Larson)  whose relationship with Kong winds up being less sexualized than in previous Kong films.

As the civilians and military approach the island in those “Apocalypse Now” helicopters, they are suddenly greeted by 100 feet of Kong, swatting choppers away with a flick of his wrist.  It’s a pretty powerful series of shots here, but then Kong as always been a master of screen entrances, probably the best this side of Streisand.

The survivors are separated from one another, and both groups each have work their way to safety at the edge of the island, dodging giant squid, spiders and especially lizards along the way, but they also discover a Chicago-born World War II survivor (John C. Reilly) who lives among the natives here and has been struck on the island for the past 28 years.  Reilly, looking for all the world like Poopdeck Pappy from the Popeye cartoons, begins his performance at first as big big big, but he soon dials it back and, in many ways becomes the conscience of the film.

(I have to take a moment to give a big Profile in Courage award to director Vogt-Roberts, who bravely cast not only Reilly but two other all-stars from the Scenery Chewers Hall of Fame, Jackson and Goodman, who all somehow hold it in check and offer very effective performances.)

But the star of a Kong movie is always Kong, and this particular incarnation of the the ape is quite impressive, especially the CGI work.  On this site, I’ve given bad CGI quite a hard time, but when it works, such as the Oscar-winning work in last year’s “The Jungle Book,” attention must be paid.  And in “Kong: Skull Island,” it works.

Aside from the ever-present references to Joseph Conrad’s book “Heart of Darkness” and its film adaptation “Apocalypse Now,” there’s not a whole lot of depth to the script.  But really, who comes to a “King Kong” movie looking for depth?  You want to get strapped into your seat and let the ride take you where you want to go.  “Kong: Skull Island” does just that, and unlike other loooong superhero movies, I never looked at my watch once.