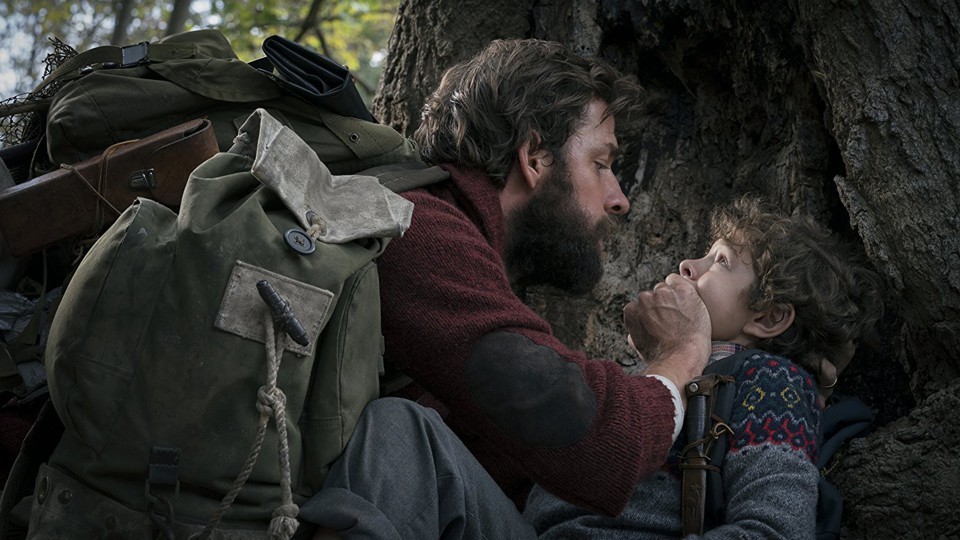 “A Quiet Place” scared the bejesus out of me.

I’m usually not a sucker for movies that go “Boo!” and expect me to be scared, but “A Quiet Place” grabbed me from its very first images.  A barefoot family wanders into an abandoned drug store in an abandoned town, and when one of its members grabs an object that makes a noise, the family of five immediately becomes a family of four.

It seems that Earth has been conquered by insect-like creatures that have “Alien”-like incisors.  They’re blind but have super-sensitive hearing, so if these creatures are in the area and a human makes a sound, they’re lunch.

That’s a fresh approach to a horror film, but director John Krasinski (probably best known as Jim from 188 episodes of “The Office”) and his co-writers Bryan Woods and Scott Beck only deepen the emotional impact by focusing solely on the barefoot Abbott family — dad Lee (Krasinski), wife Evelyn (Krasinski’s real-life wife Emily Blunt), timid son Marcus (Noah Jupe of last year’s “Suburbicon”) and their deaf daughter Regan (Millicent Simmonds, a deaf actress who was so good in 2017’s “Wonderstruck”).

The Abbotts are barefoot because footwear will noisily snap twigs, but that’s not their only problem.  Evelyn is pregnant, and let’s just say that no woman has ever given birth silently.  (Why Lee and Evelyn would even think of conceiving yet another child in this year-long alien invasion is an issue that the film never really addresses, a flaw.)

One of the most brilliant conceits of the film, however, is that, since Regan is deaf, the family has learned American Sign Language (ASL), thus giving them a way of communicating with each other that makes no sound that helps to explain why, amidst this devastation, the Abbotts are still alive.

But there are two objects I would single out as the source of the film’s most terrifying moments (no real spoilers, I think).

The Abbotts’ place of safety is the basement in their farmhouse, and on their stairs, there is an exposed nail, which, let’s just say causes problems for the barefoot family.

And then there’s this.

As a huge hungry insect roams around upstairs, Evelyn’s water breaks and she has to flee to the bathtub to give birth.  She is agonizing silently, or so she thinks.  Then a tentacle-like leg appears behind her.

Are you getting an idea of “A Quiet Place”?

One thing I loved about the film is its economy.  90 minutes, and you’re done, with not one second wasted.  With so many films overstaying their welcome (especially horror films), Krasinski’s choice of only including what he needs to tell the story is admirable and only helps to increase the tension as the story develops.

Yes, there are probably too many “Boo!” moments (my screening friend next to me kept laughing every time I jumped out of my seat, I’ll admit) but, God help me, Krasinski makes them work.

As the dad, Krasinski is terrific, and his scenes when he brings his son out for man-training out to a waterfall where they can at last safely speak work beautifully.  But “A Quiet Place” really belongs to the women in the cast.

As Regan, Simmonds commands the screen, and when she walks away from the family to visit the memorial to her late brother, your heart goes out to her, yet you’re still terrified for her every second.

And then there’s Emily Blunt.  From her frustrated assistant in “The Devil Wears Prada” to the idealistic drug enforcer in “Sicario” to the determined Baker’s Wife in “Into the Woods,” Blunt has been one of our major film actresses over the past decade, but her Evelyn is one of her very best performances ever.  (And I would very strongly suggest the bathtub scene as her Oscar clip.)

In promoting the movie on talk shows, Blunt and Krasinski have been delightful, and he in particular has come off as a real goofball.  The last real goofball who made a horror movie was named Jordan Peele, and he won an Oscar for it.  Perhaps history will repeat itself.  Who knows?

Showtime’s “The Circus: Inside the Wildest Political Show on Earth” May Be the Most Topical Series Out There Right Now